The focal mechanism of an earthquake describes the inelastic deformation in the source region that generates the seismic waves. In the case of a fault-related event it refers to the orientation of the fault plane that slipped and the slip vector and is also known as a fault-plane solution. Focal mechanisms are derived from a solution of the moment tensor for the earthquake, which itself is estimated by an analysis of observed seismic waveforms. The focal mechanism can be derived from observing the pattern of "first motions", that is, whether the first arriving P waves break up or down. This method was used before waveforms were recorded and analysed digitally and this method is still used for earthquakes too small for easy moment tensor solution. Focal mechanisms are now mainly derived using semi-automatic analysis of the recorded waveforms.[1] 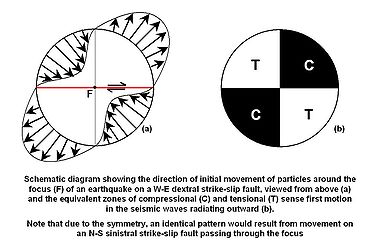 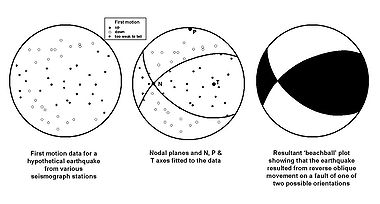 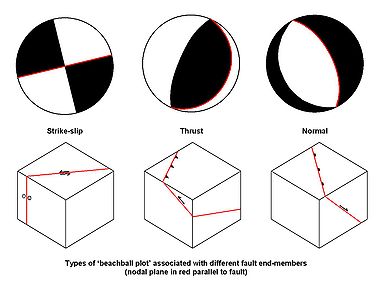 The moment tensor solution is typically displayed graphically using a so-called beachball diagram. The pattern of energy radiated during an earthquake with a single direction of motion on a single fault plane may be modelled as a double couple, which is described mathematically as a special case of a second order tensor (similar to those for stress and strain) known as the moment tensor.

Earthquakes not caused by fault movement have quite different patterns of energy radiation. In the case of an underground nuclear explosion, for instance, the seismic moment tensor is isotropic and this difference allows such explosions to be easily discriminated from their seismic response. This is an important part of monitoring to discriminate between earthquakes and explosions for the Comprehensive Test Ban Treaty.

The data for an earthquake is plotted using a lower-hemisphere stereographic projection. The azimuth and take-off angle are used to plot the position of an individual seismic record. The take-off angle is the angle from the vertical of a seismic ray as it emerges from the earthquake focus. These angles are calculated from a standard set of tables that describe the relationship between the take-off angle and the distance between the focus and the observing station. By convention, filled symbols are used to plot data from stations where the P-wave first motion recorded was up (a compressive wave), hollow symbols for down (a tensional wave), with dots for stations with arrivals too weak to get a sense of motion. If there are sufficient observations, one may draw two well-constrained orthogonal great circles that divide the compressive from the tensional observations and these are the nodal planes. Observations from stations with no clear first motion normally lie close to these planes. By convention the compressional quadrants are colour-filled and the tensional left white. The two nodal planes intersect at the N (neutral)-axis. The P and T axes are also often plotted; with the N axis these three directions respectively match the directions of the maximum, minimum and intermediate principle compressive stresses associated with the earthquake. The P-axis is plotted in the centre of the white segment, the T-axis in the centre of the colour-filled segment.

The fault plane responsible for the earthquake will be parallel to one of the nodal planes, the other being called the auxiliary plane. Unfortunately it is not possible to determine solely from a focal mechanism which of the nodal planes is in fact the fault plane. For this other geological or geophysical evidence is needed to remove the ambiguity. The slip vector, which is the direction of motion of one side of the fault relative to the other, lies within the fault plane, 90 deg from the N-axis.

To give an example, in the 2004 Indian Ocean earthquake, the moment tensor solution gives two nodal planes, one dipping northeast at 13 degrees and one dipping southwest at 79 degrees. In this case the earthquake can be confidently associated with the plane dipping shallowly to the northeast, as this is the orientation of the subducting slab as defined by historical earthquake locations and plate tectonic models.[2]

Fault plane solutions are useful for defining the style of faulting in seismogenic volumes at depth for which no surface expression of the fault plane exists, or where the fault trace is covered by an ocean. A most beautifully simple example of a successful test of the hypothesis of sea floor spreading was the demonstration that the sense of motion along oceanic transform faults[3]is opposite to what would be expected in classical geologic interpretation of the offset oceanic ridges. This was done by constructing fault plane solutions of earthquakes in oceanic faults, which showed beach ball plots of strike slip nature (see figures), with one nodal plane parallel to the fault and the slip in the direction required by the idea of sea floor spreading from the ridges.[4].

Fault plane solutions also played the key role in the discovery that the deep earthquake zones in some subducting slabs are under compression, others are under tension[5].

There are several programs available to prepare Focal Mechanism Solutions (FMS)[which?]. BBC, a MATLAB based tool box, is available to prepare the beach ball diagrams. This software plots the first motion polarity data arrived at different stations. The compression and dilation are separated using mouse help. A final diagram is prepared automatically.[6]