The Black Saint and the Sinner Lady

The Black Saint and the Sinner Lady 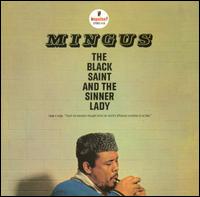 "The Black Saint and the Sinner Lady" is a 1963 composition and by . The piece consists of a single six-part suite performed by an eleven-piece band. An intensely emotional work, it displays Mingus' skill as composer, orchestrator, and technician.

Written as a ballet, the work borrows from Ellingtonian and Latin sources, but creates a unique orchestral style that Mingus called "ethnic folk-dance music".

The orchestrations (described as "one of the greatest achievements [...] by any composer in jazz history" by ) are rich and multi-layered. Mingus' perfectionism led to extensive use of studio bing techniques, the first for a jazz album.Fact|date=May 2008

The track A features the tuba virtuoso playing a .

The website "", which aggregates reviews from reviewers and users alike, has the album ranked as the #4 album of all time, behind "Abbey Road", "Revolver", and "".

ranks the album as the #1 jazz album of all time.