The Wombles are fictional pointy-nosed, furry creatures that live in burrows, where they help the environment by collecting and recycling rubbish in useful and ingenious ways. Wombles were created by author Elisabeth Beresford, originally appearing in a series of children's novels from 1968.[1] Although Wombles supposedly live in every country in the world, the stories are concerned with the life of the inhabitants of the burrow on Wimbledon Common in London, England.

The characters became nationally famous in the UK in the mid 1970s as a result of a very popular BBC children's television show using stop motion animation. A number of spin-off novelty songs also became major hits in the British music charts. The Wombles (band) was the brainchild of British music writer and composer, Mike Batt.

The Womble motto is "Make Good Use of Bad Rubbish." This green message was a reflection of the growing ecology movement of the 1970s.[2]

Elisabeth Beresford was a freelance ghost writer and children's book author. She was born in Paris and travelled the world with her BBC sports commentator husband Max Robertson.[3] 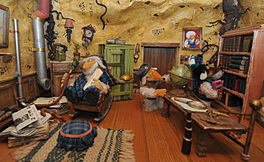 L-R Great Uncle Bulgaria, Bungo and Stepney (plus unknown in picture on wall), in one of the rooms in the burrow. Photo taken at National Media Museum, Bradford, UK.

Beresford developed the characters around members of her family, and named them after places the family had associations with:[5][6]

In the first book, Bungo was the youngest and least experienced of the team, and the story is mostly viewed through his eyes. Afterwards Wellington (who was not introduced until the second book) took over the role of "new boy". Alderney and Adelaide appeared in the earlier books but were not included in the original 1970s TV series. Alderney was re-introduced in the later TV shows produced in the 1990s (the Channel Island of Alderney was actually Elisabeth Beresford's home at the time), along with Stepney (who appeared in none of the earlier versions).

Though Wombles live all around the world, the story is based on the group living in Wimbledon Common in London, England. Below a certain age, all Wombles are nameless. Upon coming of age, a Womble chooses his name by looking through Great Uncle Bulgaria's large atlas until they find a name that suits them. Some, like Bungo, "merely shut their eyes tight and point and hope for the best."[7] They then leave Miss Adelaide's "Womblegarten" and join in the communal work of the burrow, which is mostly clearing up and recycling human refuse. The life expectancy of a Womble is over 200 years, with some reaching 300, which would make them the longest-lived of all animal species.

Wombles are vegetarians (herbivores more precisely) and are very fond of mushrooms. They eat a variety of plants, fungi, and tree products that Human Beings cannot, or will not, eat. So daisy buns, acorn juice, fir-cone soufflé, elm bark casserole and grassbread sandwiches are part of the Womble menu - augmented by any food left behind on the Common by Human Beings.

Wombles are very careful to keep their existence secret from Human Beings - at least in the books and TV series. In the movie Wombling Free this is reversed as the Wombles seek to get Human Beings to listen to their "make good use of bad rubbish" pleas. Otherwise secrecy is the rule, though there have been a few exceptions, such as Mr. Smith, a lonely senior citizen who is invited inside the Wombles burrow on Christmas Eve.[8] They generally have a low opinion of other animals, though kind to them. They especially have a poor opinion of Human Beings, with the exception of royalty, especially the Queen. They dislike lies and lying, though on occasion they are known to stretch the truth or omit important details.

There are other species and burrows of Wombles discovered throughout the series of books. The Loch Ness monster is revealed to be a clan of water Wombles and the yeti of the Himalayas are revealed to be giant snow-white Wombles. Wombles have a sixth sense which allows them to sense green spaces and wildlife, first mentioned in the Wandering Wombles, but developed to a keen long range telepathic sense by Dalai Gartok Womble in The Wombles Go Round The World.

In the original editions of the books the Wombles are pictured as bear-like and between 4 and 5 feet (about 1.5 metres) in height. Their size and appearance changed with the TV series, where they are portrayed as about knee high with pointy snouts, much like a raccoon's (although raccoons are not native to Britain). In the book and movie Wombling Free they are described as "short, fat, and furry", roughly between three or four feet (about 1 metre) in height.

There were five novels:

All of these were out of print for many years, but they are currently being re-issued by Bloomsbury with all-new illustrations. The last two books are less well known than the original three, perhaps because they appeared after the successful television series began. In The Wandering Wombles, the setting moved from Wimbledon Common to Hyde Park in central London. However The Wombles to the Rescue saw them return to Wimbledon Common.

Wombles appearing in the books included:

Beresford also wrote a collection of short stories entitled The Invisible Womble and Other Stories (1973), in which the original Wimbledon Common setting was restored. Although based on episodes from the TV series, these stories occasionally refer to events in the novels.

In addition to these books, a great many annuals, picture-books and children's early readers have been published over the years, some of which were also written by Elisabeth Beresford.[9]

Songwriter and producer Mike Batt wrote the series' theme tune, and later went on to perform and produce a number of highly successful novelty singles as The Wombles in the 1970s.[1]

The Wombles starred in a number of British comics including Eurovision Song Contest 1974.

The Wombles were exported to American audiences in the late 1970s when they made occasional appearances on CBS' Captain Kangaroo.

The Wombles are popular in the MUD world, particularly on Discworld MUD.[11]

In 2009 The Wombles featured in "The Official BBC Children in Need Medley" which reached No.1 in the UK singles charts.

The Wombles and sport 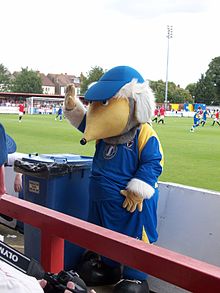 "Haydon" the mascot of AFC Wimbledon.

Due to the Wombles' association with the area, some local sporting teams representing Wimbledon are sometimes affectionately dubbed "the Wombles". These teams include the Ladies side of Wimbledon RFC[13] (whose mascot is Alderney), Wimbledon Volleyball Club and the Wombles Netball Club.[14]

From 2000 to June 2003, Wimbledon F.C. used a Womble named "Wandle" as a club mascot after the local River Wandle. However, in light of the controversy over the moving of the club to Milton Keynes, the licence to use the character was not renewed.[15] In 2006 the club's spiritual successor AFC Wimbledon agreed a licensing deal, and launched its own Womble mascot. After a naming competition in which the final name was chosen by Elisabeth Beresford herself, the club announced that the new Womble would be known as "Haydon," after Haydons Road, the nearest railway station to Wimbledon's original home ground, Plough Lane.

In a special episode of "A Question of Sport" that was themed around the Wimbledon tennis championships, Sue Barker mentioned having asked then team captains Ally McCoist and John Parrott to name their Wimbledon heroes. The replies were "Vinnie Jones" and "Uncle Bulgaria"!

Barrington Womble MBE (played by John Halsey) is the drummer of the fictional band The Rutles. A spoof of The Beatles drummer Ringo Starr.

Various allusions and puns are made in reference to the Wombles in the Warhammer 40,000 book series Ciaphas Cain by author Sandy Mitchell, being referenced in the form of the "Reclaimers" chapter of the Space Marines.

The 2005 film Breakfast on Pluto features the Wombles.

In the Bottom episode "'s Out", the main characters Eddie and Richie camp out on Wimbledon common and try hunting Wombles (Eddie mistakes a hedgehog for a womble) to get a meal. They fail.

The British comedy The Vicar of Dibley references the Wombles repeatedly. According to Dawn French's character Geraldine Granger: "I once tried to go on Mastermind, but they didn't like my special subject. Apparently there just aren't enough questions about the Wombles."

The Wombles are vitriolically parodied in The Borrible Trilogy by Michael de Larrabeiti as the Rumbles, the upper-class, rodent-like enemies of the working-class scavenger main characters.

The term "womble" is sometimes used in British slang to describe a person who is well-meaning but absent-minded or ineffectual. For example, Jeremy Clarkson often refers to Highways Agency Traffic Officers, who exasperate him as a matter of principle, as "traffic wombles" on Top Gear.

In the fifth season of The Ricky Gervais Show, Stephen Merchant compared Ricky Gervais to a Womble while discussing Ricky's experiences as an unemployed artist in the 1980s.

During the London Riots of 2011 people started to use the Twitter Hashtag #riotwombles to gather people over social media to help clean up the streets affected by the riots.[16]