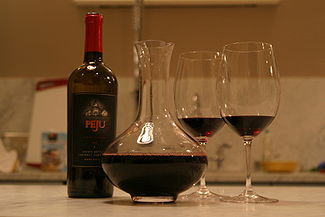 A decanter is a vessel that is used to hold the decantation of a liquid (such as wine) which may contain sediment. Decanters are normally used as serving vessels for wine. Decanters vary in shape and design. They are usually made of an inert material (such as glass) and will hold at least one standard bottle of wine (0.75 litre).[1] A similar kind of vessel, the carafe (pronounced /kəˈræf/), is used for serving wine as well as other drinks, but is not supplied with a stopper. 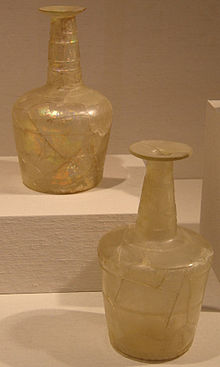 Throughout the history of wine, decanters have played a significant role in the serving of wine. The vessels would be filled with wine from amphoras and brought to the table where they could be more easily handled by a single servant. The Ancient Romans pioneered the use of glass as a material. After the fall of the Roman Empire, glass production was scarce causing the majority of decanters to be made of bronze, silver, gold, or earthenware. The Venetians reintroduced glass decanters during the Renaissance period and pioneered the style of a long slender neck that opens to a wide body, increasing the exposed surface area of the wine, allowing it to react with air. In the 1730s, British glass makers introduced the stopper to limit exposure to air. Since then, there has been little change to the basic aspects of the decanter.[1]

Other beverages, such as cognac or single malt Scotch whisky, are often stored and served in decanters, which generally have a stopper. A few expensive cognacs and malt whiskies are sold in fancy decanters.

Liquid from another vessel is poured into the decanter in order to separate a small volume of liquid, containing the sediment, from a larger volume of "clear" liquid, which is free of such. In the process, the sediment is left in the original vessel, and the clear liquid is transferred to the decanter.

Decanters have been used for serving wines that are laden with sediments in the original bottle. These sediments could be the result of a very old wine or one that was not filtered or clarified during the winemaking process. In most modern winemaking, the need to decant for this purpose has been significantly reduced, because many wines no longer produce a significant amount of sediment as they age.[1] 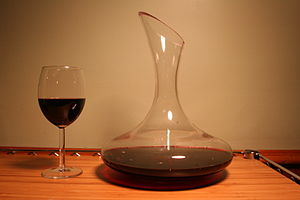 Another reason for decanting wine is to aerate it, or allow it to "breathe". The decanter is meant to mimic the effects of swirling the wine glass to stimulate the movement of molecules in the wine to trigger the release of more aroma compounds. In addition it is thought to benefit the wine by smoothing some of the harsher aspects of the wine (like tannins or potential wine faults like mercaptans). Many wine writers, such as author Karen MacNeil in the book The Wine Bible, advocate decanting for the purposes of aeration, especially with very tannic wines like Barolo, Bordeaux, Cabernet Sauvignon, Port, and Rhône wines while noting that decanting could be harmful for more delicate wines like Chianti and Pinot Noir.[2]

However the effectiveness of decanting is a topic of debate, with some wine experts like oenologist Émile Peynaud claiming that the prolonged exposure to oxygen actually diffuses and dissipates more aroma compounds than it stimulates, in contrast to the effects of the smaller scale exposure and immediate release that swirling the wine in a drinker's glass has.[1] In addition it has been reported that the process of decanting over a period of a few hours does not have the effect of softening tannins. The softening of tannins occurs during the winemaking and oak aging when tannins go through a process of polymerization that can last days or weeks - decanting merely alters the perception of sulfites and other chemical compounds in the wine through oxidation, which can give some drinkers the sense of softer tannins in the wine.[3]

Some wine experts, like writer Jancis Robinson, tout the aesthetic value of using a decanter, especially one with an elegant design and made with clear glass, and believe that for all but the most fragile of wines that there is not much significant damage to the wine by decanting it.[4] A decanter is also a way of presenting wine anonymously, and of disguising ugly wine labels. [5]