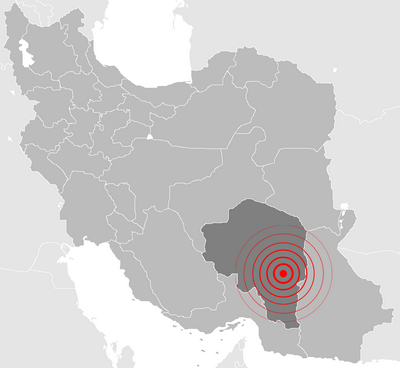 The 2003 Bam earthquake occurred in the Kerman province of southeastern on , .

Two documentaries about this earthquake has been produced entitled and Voices of Bam.

Iran suffers from frequent earthquakes, with minor ruptures occurring almost daily. There is little earthquake education in that country, most believing that if one occurs, it is God's will. , a professor at , told "" that this thinking was "poisonous".

This earthquake occurred as the result of stresses generated by the motion of the northward against the at a rate of approximately 3 cm (about one inch) per year. Deformation of the 's crust in response to the plate motion takes place in a broad zone that spans the entire width of Iran and extends into . Earthquakes occur as the result of both reverse faulting and strike-slip faulting within the zone of deformation.

The rupture length of the earthquake was estimated to be around 24 kilometers. More than half of the quake was produced from its southern segment of approximately 13 km, where the slip reached a maximum of up to 270 centimeters resulting in a large stress drop of at least 6 MPa. Optical remote sensing data shows that the Bam fault is not a single fault but consists of a 4–5 km wide fault system with the main branch running between the city of Bam and Baravat. The fault ruptured by the Bam earthquake is believed to stretch the northwest branch of this fault system from Bam southward. Based on these results, scientists suggest that the Bam earthquake ruptured a hidden fault and that in this process an unusually strong asperity was involved, causing the widespread devastation of the rupture. [Wang "et al." (2004) p. abstract.]

An important regional centre during the 16th and 17th centuries, Bam contained many buildings that were not constructed to survive such ruptures. One of the most notable examples of this was the 2,000 year old , which was destroyed as a result to this quake.

Electricity and water supplies were cut by the earthquake.

Iranian President called the rupture a "national tragedy" and urged all Iranians to help its victims. The sent experts to coordinate the relief effort. The set up tents to house survivors. Several foreign countries, including Russia, the United Kingdom, Germany, and Spain, sent supplies and rescue workers to the affected area.

The United States offered humanitarian assistance. White House spokesman spoke on behalf of President : "Our thoughts and prayers are with those who were injured and with the families of those who were killed."

As a result of the quake, two hospitals in Bam collapsed, leaving the remaining hospitals filled. Emergency centers were set up to care for the injured, though many centers did not have enough room to do so.