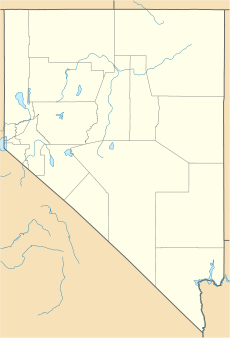 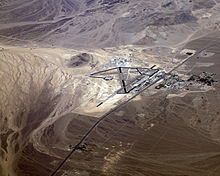 The host unit is the 432d Wing, which has six operational squadrons, one maintenance squadron, and MQ-9 Reapers and MQ-1 Predators.

Along with being the aerial demonstration training site for the Thunderbirds, the base plays a major role in the ongoing War on Terror. The base is home to the MQ-1 Predator unmanned aerial vehicle which is used regularly in Afghanistan and Iraq. The base is also home to the Unmanned Aerial Vehicle Battlelab.

The airfield that now bears General Creech’s name was originally built by the Army in the early 1940s to support the war effort during World War II. A month after the 7 December 1941, attack on Pearl Harbor, the Army began building the training camp. Known as Indian Springs Auxiliary Army Airfield , by the end of 1942, the service had contracted for regular facilities and by the end of February 1943 the base was being used as a divert field and a base for air-to-air gunnery training to support the Western Flying Training Command Gunnery School at Las Vegas Army Airfield. Personnel assigned to the airfield maintained five small airstrips.

May be a target airfield as bomb craters are visible in imagery.

The little post was in service supporting B-17s and T-6s until March 1945 when the Army put the base in stand-by status maintained by a small housekeeping staff. When Las Vegas AAF inactivated in January 1947, Indian Springs also closed down.

The base re-opened in January 1948 and two years later received its first permanently assigned Air Force unit. In August 1951 the base became an auxiliary field and in July 1952 transferred from Air Training Command (ATC) to the Air Research and Development Command (ARDC), reporting to the Air Force Special Weapons Center at Kirtland AFB in Albuquerque, New Mexico.

Det 1, AFSWC(Air Force Special Weapons Center): Mid/Late 1960s[2] The base was home to a contingent of aircraft detached from Kirtland AFB in the mid-late 1960s. This was designated Detachment 1, AFSWC (Air Force Special Weapons Center). Det 1's mission was to support the Atomic test site by transporting personnel to and from Mercury Nevada and Yucca Flats and to hover over selected underground tests while monitoring for radiation leaks. Ancillary missions were carried out including target marking at the nearby bombing range for the aircraft from Nellis AFB as well as searching for and retrieving weather balloons. During one bombing range support mission in 1967 (1968?) the unit Commander Lt. Colonel Conner(s)and his co-pilot, Captain Peterson(?)were killed when their Beaver aircraft crashed into one of the mountains that ringed the range; it was suspected that a smoke bomb may have been inadvertently dropped inside the plane during the flight.

This detachment consisted of an administrative unit, an electronics repair unit, a small supply unit, and as well as a dozen+ or so pilots and maintenance personnel. The unit flew 4 fixed-wing aircraft and two helicopers. Two fixed wing planes were single-engine Beavers and two other twin-engine planes; In 1966 the unit flew a pair of HH-43 helicopters which were replaced by a pair of UH-IF utility aircraft that same year. [End Det 1, AFSWC]

In 1961 the base transferred to the Tactical Air Command (TAC). It was officially known as Indian Springs Air Force Auxiliary Field at least prior to 1977 and remained that until 2005. Following the inactivation of Tactical Air Command. In 1992, the base became a component of Air Combat Command (ACC). During the 1970s and 1980s, the only assigned aircraft unit on the base was a detachment of UH-1N Twin Huey helicopters which was designated as "Det 1". The primary mission during this time was range maintenance for the vast Nellis weapons range. The 57th Combat Support Squadron was the primary squadron on the base during this time which was composed of Air Force Civil Engineers.

The base has also been the remote training site for the USAF Thunderbirds. On 18 January 1982, while practicing for an air show at Davis-Monthan AFB, the entire 4-ship diamond formation of the Thunderbirds crashed at Indian Springs. The four pilots, including the squadron commander, were flying T-38 Talon aircraft that equipped the team at the time and were performing a line abreast loop when all aircraft had a controlled flight into terrain (CFIT) impact along the runway in front of the base Fire Station.

On 20 June 2005, Indian Springs Air Force Auxiliary Field officially changed its name to Creech Air Force Base in honor of the late General Wilbur L. “Bill” Creech. Gen Creech was a former commander of the Tactical Air Command and was also known as the “father of the Thunderbirds,” the Air Force’s premiere air demonstration squadron.[3]

In October 2005, the 3d Special Operations Squadron was activated at Creech joining the 11th, 15th and 17th Reconnaissance Squadrons, becoming the first MQ-1 squadron in the Air Force Special Operations Command. The Joint Unmanned Aerial Systems Center of Excellence was also established at the same time.

The 42d Attack Squadron was formed at Creech on 8 November 2006 as the first Reaper squadron.

Many organizations have criticized the use of the Predator and Reaper drones, and the perceived extremely high danger of harming civilians [5][6][7] In protest to UAV attacks in Pakistan, in an event sponsored by Nevada Desert Experience, Father Louie Vitale, Kathy Kelly, Stephen Kelly, SJ, John Dear, and others were arrested outside the Air Force Base on Wednesday April 9, 2009.[8]. They were convicted of trespassing, and sentenced to time served on January 27, 2011. [9] Additional protests have been held, conducted by a number of organizations including Code Pink.[10]

In 2011, the ground stations used to control drones were found to be infected with keylogger software. It is suspected the malware was introduced through the use of removable disk drives to load map updates and transport mission videos from one computer to another. [11][12] The Twenty-Fourth Air Force was alerted to the problem by reading an article in Wired Magazine.[13] The Air Force issued a statement that the virus had "posed no threat to our operational mission".[14]