Otto Frederick Hunziker (25 December 1873 – 16 November 1959) was a pioneer in the American and international dairy industry, as both an educator and a technical innovator. Otto Hunziker was born and raised in Switzerland, emigrated to the U.S., and studied at Cornell University. He started and developed the dairy program at Purdue University when such programs were at their infancy. At this same time, Professor Hunziker was heavily involved with the development of the American Dairy Science Association (ADSA) and the standardization and improvement of many dairy tests and processes. Professor Hunziker wrote several of the leading dairy processing texts, which continue to be cited. After leaving Purdue University, Otto Hunziker managed research and operations at a large, national condensary, continued to drive ADSA's standardization and publishing efforts, represented the U.S. at international dairy congresses, and facilitated dairy industry improvements across the globe.

During this time period, significant new development in dairy processing technology was occurring on both sides of the Atlantic Ocean. In 1890, Stephen Babcock published specifications for the Babcock test for milk fat content. In 1892, Dr. Niklaus Gerber acquired a Swiss patent on the Gerber method for analyzing fat content in milk.[5] Dr. Gerber was based in Zürich, had studied at the University of Zürich, and worked for two years at the Swiss-American Milk Company in Little Falls, New York. Otto Hunziker would spend a substantial amount of time studying and improving these analytic methods.

In the United States, O. F. Hunziker initially worked on a dairy farm near Attleboro, Massachusetts. To improve his English and commercial skills, he studied at Bryant and Stratton Business College (now Bryant University), Providence, Rhode Island in 1896. He returned to Switzerland briefly in 1898 before returning to receive a B.S. Agriculture in 1900[6] and M.S.A. in 1901 from Cornell University.[3][7] He served as an assistant in charge of dairy bacteriology at Cornell University until 1902,[8][9] when he equipped and operated a dairy manufacturing research laboratory for the Scranton Condensed Milk Company in Ellicottville, New York.[3] Otto Frederick married Florence Belle Burne on 10 April 1905 in Portville, Cattaraugus County, New York.[10]

In 1905 Hunziker accepted a position at Purdue University in West Lafayette, Indiana as head of Purdue's Dairy Department.[11][12] Dairy departments were relatively new at American colleges. (The first dairy school in the U.S. was created at the University of Wisconsin in 1890.[13]) Professor Hunziker led Purdue's dairy department through significant growth.[14][15]

In the summer of 1906, O. F. Hunziker was among 18 teachers and investigators meeting at the University of Illinois, Urbana, to found what was then known as National Association of Dairy Instructors and Investigators. (The following year, this association changed its name to "Official Dairy Instructors' Association" and, in 1916, changed its name to "American Dairy Science Association" (ADSA).[16]) From 1910 to 1926, Otto Hunziker chaired ADSA's Committee on Official Methods of Testing Milk and Cream for Butterfat. In 1911, this committee met in Washington DC with the U.S. Bureau of Dairying, the U.S. Bureau of Standards and manufacturers of glassware.[17] Standard specifications for Babcock glassware were published as a result of this meeting. Professor Hunziker actively pursued numerous improvements to the testing methodology, which improved the quality and safety of dairy products. Otto Hunziker was the third president of ADSA from 1910 through 1911. During Professor Hunziker's presidency, ADSA also: created a national score card for scoring dairies; standardized dairy judging contests; secured scholarships for student contests; improved national milk standards; developed ties with breed associations; and, provided fora for industry discussions on dairy instruction and extension services.[18] 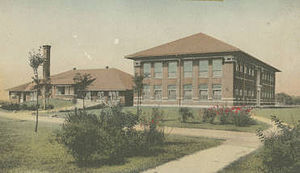 Professor Hunziker wrote dairy articles and textbooks used throughout the world, developed dairy curricula, advocated for dairy laws, and developed standard testing methodology. In particular, Dr. Hunziker authored The Butter Industry, Prepared for Factory, School and Laboratory, a well-known text in the industry that enjoyed at least three editions (1920, 1927, 1940).[19] A book that Dr. Hunziker originally self-published in 1914, Condensed milk and milk powder: prepared for the use of milk condenseries, dairy students and pure food departments, was republished in a seventh edition in October 2007 by Cartwright Press. According to one book review: "The popularity of this book may be judged by the fact that this is the fourth edition, the three previous editions having long since been exhausted. The book is the most important contribution on the condensed milk and milk powder industry. It should be in the library of the teacher, the student or factory man interested in any phase of the condensed milk and milk powder industry."[20] Both books are listed by Cornell University as "Core Historical Literature of Agriculture". In the 1920s, O.F. Hunziker initiated a "dairy school over the air"—a radio program on WGN for which dairy experts were invited to discuss various issues. Otto Hunziker was a director of the National Dairy Council and is listed in The Ten Master Minds of Dairying.[18][21][22][23] When the World's Dairy Congress was held in the U.S. in 1923, the U.S. Department of Agriculture selected O. F. Hunziker to head the industry and economics program.[24] He later represented the United States at World Dairy Congresses in London, 1928; Copenhagen, 1931; Berlin, 1937; Stockholm, 1949; and The Hague, 1953. He obtained several United States patents, including: "Apparatus for deodorizing cream". 1925-06-30. http://www.google.com/patents?id=gtZQAAAAEBAJ.  and Process for treating milk and its products. 1929-08-06. . At Blue Valley, O. F. Hunziker established a research program for 22 creameries and two milk plants. In 1932, Purdue University bestowed an honorary doctoral degree in science.[3][25] He retired from Blue Valley Creamery in 1939 to work as a consultant. In 1942, O F Hunziker was honored with the first ADSA honorary life membership.[26] Otto Hunziker was awarded numerous international honors[1] for his work, including:

All three sons of Professor Hunziker attended Purdue University. Children of Otto and Florence were:

Otto (Sr.) was on the board of the La Grange First Methodist Church and the La Grange Federal Savings and Loan Association as well as active in the Civic Club, Kiwanis Club, and American-Swiss Chamber of Commerce. Hobbies included water sports, mountain climbing, ice skating and gardening.[1]

Otto Frederick Hunziker died on 16 November 1959 in La Grange, Illinois.[3] A portrait of Dr. Hunziker and plaque hang in Purdue's Smith Hall.[35] In 1964, 283 leaders in the dairy industry were asked to name contributors most significantly shaping the dairy industry. O. F. Hunziker was listed third, ahead of such well-known industry luminaries as Gail Borden.[36] He was also inducted into the National Dairy Shrine as a "pioneer".[37]