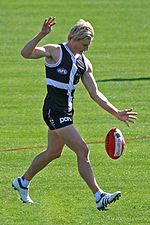 Jones at training prior to the 2009 AFL Grand Final

Jones was recruited from South Fremantle in the WAFL with the 9th selection in the 2006 AFL Rookie Draft. At South Fremantle he had won consecutive best and fairest awards and was a part of South's 2005 premiership winning team.[1] Following that Grand Final, he was mistakenly announced as the winner of the Simpson Medal, before it was corrected and the true winner Toby McGrath was awarded the medal.[2]

Jones was drafted to the Saints at the age of 22, which is unusually old for an AFL draftee.[3]

Jones played in 21 of 22 home and away matches in the 2009 AFL season, which resulted in St Kilda topping the premiership ladder, winning the club’s third minor premiership.[5] He won the 2009 Robert Harvey Most Professional Player Award. He was also named in Mike Sheahan's top 50 AFL players for 2009, coming in at 49th. Before the start of the 2010 season he changed his number from 38 to 4, which had previously been worn by club legends Barry Breen and Tony Lockett.