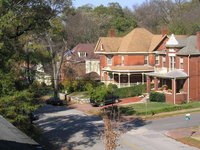 The Fort Wood National Historic District is a historic in . It is located just east of the UT Chattanooga campus, bounded roughly by Palmetto St., McCallie Av., Central Av., and Fifth St.

Originally, this area was a Civil War fortification, and was sold to developers in the 1880s. Before long, Fort Wood became one of Chattanooga's finest residential neighborhoods, with an excellent representation of Chattanooga architecture from the 1880s to the 1920s. There are many excellent examples of Queen Anne, Tudor, and Romanesque, as well as many others. Approximately 120 buildings are listed on the and together, those buildings comprise the Fort Wood National Historic District.

By the mid 1950s, the Fort Wood neighborhood had fallen into a steady decline. Owing to "," many of the residents left for more affluent suburbs such as Signal Mountain, Hixson, and East Brainerd.

By the 1970s, the neighborhood's situation had become critical. Many of the buildings in and around Fort Wood had fallen into disrepair or had become victims of or . The neighborhood's bad reputation began to affect the students of nearby UT Chattanooga, many of whom moved off campus and stopped enrolling in evening classes.

By the early 1980s, efforts were underway restore the Warner House, at the corner of Vine and Palmetto Streets. Within a decade, the had given the Fort Wood area statutory protection and many more houses were under renovation. Today, many of the homes in Fort Wood have been converted into apartments. Indeed, student apartments in this area are highly sought after by UTC students who wish to live off, but close to, the campus. One reason for this demand may be attributed to UTC's strict alcohol free policy. Fort Wood's historic preservation is ongoing and land values are rising.