Performance in Warszawa in September 2011

Corvus Corax is a German band known for playing Neo-Medieval music using an abundance of authentic instruments. Their name is the latin name for the Common Raven. The band was formed in 1989 by Castus Rabensang, Wim (Venustus) and Meister Selbfried ("Master Selfpeace") in East Germany. The band often uses bagpipes as the solo instrument; their live performances attract attention with the bizarre look of the musicians being reminiscent of ancient Greek myths: half-naked, dressed in unusual clothes, wearing primitive tribal decorations, often tattooed.

Today the band consists of eight members: Martin Ukrasvan, Castus Rabensang ("Castus Ravensong"), Panpeter, Harmann der Drescher ("Harmann the thresher"), Hatz ("hunt"), Teufel ("devil") and Wim (Venustus). In May 2005 Meister Selbfried, one of the Corvus Corax founders and the researcher of medieval music, decided to cease his active musicianship and to dedicate himself mostly to managing Corvus Corax's own label Pica Records.[1] His place in the line-up was taken by Jordon Finus in 2006.

The band releases its music through Pica Records in Europe and Noir Records in the USA. The Cantus Buranus projects have thus far been released in Europe by Roadrunner Europe.

Because medieval music theory was dominated by ecclesiastics, it is often difficult to determine from the existing manuscripts just how the secular medieval music sounded. Corvus Corax draws on a number of sources to try to make their music as authentic as possible: they have used documents that "condemn profane music" as an indicator of what the music might have sounded like, and drawn on nineteenth century scholarly treatises for information. In many cases these treatises are unreliable, as they impart more nineteenth century interpretations of medieval music than factual information on what the music was like.

But a number of things are known for certain. For example, the profane music of the day was often accompanied by a droning bass tone similar to that generated by the bourdon stop on an organ, which is provided in Corvus Corax's case by the drones on their bagpipes. An inkling as to the harmonies used is found in a song by Walter von der Vogelweide, in which he calls for the song to be played "the old way", meaning harmonising with thirds. At the time, the third was considered an awkward, ugly interval by the sacred musician — like the tritone, or diabolus in musica — but it was a common interval in folk music.

Matters are further complicated by the fact that each minstrel would add his personal interpretation to a piece, and that recorded (i.e. written) versions may differ depending on who did the transcribing, and where. It is on this that Corvus Corax's interpretation hinges: medieval popular music was played more from the heart than the brain, and despite making use of scholarship to give them a grounding, Corvus Corax attempts to maintain the spirited, free manner in which the minstrels themselves would have played the music.[2]

In 1996 the band released the album Tanzwut which combined the elements of metal music with their brand sound of bagpipes. The CD turned out to be a commercially successful experiment and the band decided to continue the tradition of that album in a separate musical project called Tanzwut, which included Castus Rabensang (German Rabensang = ravensong), Wim, and Teufel (German Teufel = Devil) from Corvus Corax as well as three new members. 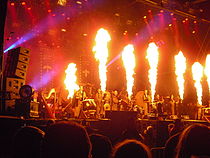 In 2005 Corvus Corax started the ambitious project "Cantus Buranus": a full-length opera set to the original Carmina Burana manuscript lyrics. The music for the opera was fully composed by the band and had no connection with the famous work by Carl Orff. It was performed with symphonic orchestra, choir and medieval ensemble, combining traditional symphonism with medieval minstrel-like melodies. The project included a CD recording, a DVD, as well as live performances. A live CD and DVD recording of Cantus Buranus was released in March 2006.

2005 also marked the band's debut concerts in the USA. The band performed four sets on each of four different days in mid-October, not far from Philadelphia at the Pennsylvania Renaissance Faire. There was also a "secret show" held for employees of the Faire. Footage shot by the band members and crew was assembled into a featurette that was included as a bonus track on the US edition of the band's live DVD, "Gaudia Vite."

Out on August 1, 2008 via the band owned label Pica Music, the most recent Corvus Corax album "Cantus Buranus II" was released.,[3] It is a new orchestral recording of songs from the Medieval manuscript "Carmina Burana". The Berlin based act created a composition for orchestra, choir and a Medieval ensemble and recorded the CD and DVD live in the Museum Island in front of 5000 people.

It has recently been confirmed that Corvus Corax will be performing a live rendition of their song "Ballade De Mercy" in the pilot episode of the HBO TV series A Game of Thrones, based on the fantasy series A Song of Ice and Fire by George R.R. Martin [4]