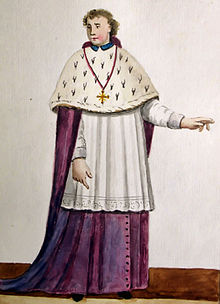 Choir dress is the vesture of the clerics, seminarians and religious of traditional churches worn for public prayer, either apart from the eucharist or by those attending the eucharist as the clergy part of the congregation rather than as the celebrants. Choir dress is different from the vestments worn by the celebrants of the eucharist, and is normally made of fabrics such as wool, cotton or silk, as opposed to the fine brocades used in vestments (with the exception of the cope, which is both a vestment and choir dress).

Choir dress also differs from "house dress" which is worn outside of a liturgical context (whether in the house or on the street). House dress may be either formal or informal. 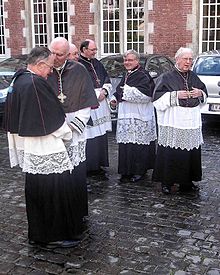 Choir dress in the Roman Catholic Church is worn by deacons, priests and bishops when presiding at or celebrating a liturgy that is not the Mass, especially the Liturgy of the Hours, or when attending Mass without celebrating or concelebrating the Eucharist. It is worn by seminarians, instituted lectors and acolytes, and altar servers and choir members at Mass or other liturgical events.

The basic components of choir dress are:

For seminarians, deacons, and priests the cassock is exactly the same as their normal cassock: a black cassock with black buttons, girded with a black fascia.

Priests who hold additional honors may wear a different cassock: chaplains of honor wear a black cassock with purple piping, buttons, and fascia, while honorary prelates and protonotaries apostolic wear a purple cassock with scarlet piping and buttons with a purple fascia. A black cassock with amaranth piping and buttons, girded with a purple fascia, serves as pian dress (academic dress) for an honorary prelate or protonotary apostolic. Canons may wear the rochet with a distinctive mozzetta, the particular colors of which are determined by the chapter.

Bishops wear the above mentioned purple cassock with scarlet piping, and add a pectoral cross suspended from a green and gold cord, a mozzetta over the rochet, and a purple zucchetto under the biretta. A cardinal wears a scarlet cassock with scarlet trim, pectoral cross on a red and gold cord and a red mozzetta over the rochet, with a red zucchetto. The Pope's choir dress includes a white cassock, rochet, red silk mozetta, red brocade stole and his pectoral cross hangs from a golden cord. Some canons wear their cross on a ribbon, but only a bishop may wear the cross on a cord. Under new regulations, neither bishops nor canons wear fur trimmed cappas.

The cope and/or stole may be worn over choir dress when a cleric presides over a sacrament (for instance, at matrimony, if not celebrated during Mass), or by the cleric presiding over prayers (for instance, the priest presiding at a solemn celebration of Vespers in the Liturgy of the Hours at a seminary might wear cope and stole over choir dress, while the priests of the faculty and seminarians would wear simple choir dress of cassock and surplice).

Monks who are neither deacons nor priests also have a form of choir dress: the full monastic habit with the monastic cowl forms their formal wear for attending the Liturgy of the Hours or Mass.

Informal house dress for the higher clergy is the simar with fascia (a fringed sash worn around the waist), and zucchetto. Formal house dress may include additionally the biretta and ferraiuolo. For everyday wear, especially in North America and Great Britain, a clergyman may wear a collared clergy shirt with black or grey coat and pants. Some clergy, especially religious, will wear non-clerical dress when about parish duties among those who know them well. Sometimes, cardinals or bishops will have piping and colored buttons attached to their clergy shirts so it resembles the simar.

The choir dress of clergy in the Eastern Orthodox, Oriental Orthodox and Eastern Catholic churches are relatively similar. Over the inner cassock (rasson or podrasnik), a deep-sleeved exorason (riassa), which is often black, is worn. In the Russian Orthodox Church, married clergy often wear grey, while monastic clergy wear black. During the paschal season both monastic and married clergy will often wear a white inner cassock. Some Russian Metropolitans wear a white inner cassock and a blue outer when formally arriving to celebrate the Divine Liturgy.

In Eastern Orthodoxy and Byzantine Catholicism, monks wear a black cloak, the mandyas over the outer cassock. The mandyas completely covers the monastic below the chin and reaches to the floor. In the Greek usage, the mandyas is usually only worn when performing certain liturgical roles; in the Slavic usage, all monks and nuns of the rank of Stavrophore or above wear the mandyas at every service, so long as they are in their own monastery. The mandyas of an hegumen (abbot) is of black silk, that of an archimandrite or bishop is of coloured silk (specific usages will differ by jurisdiction), and has four square "tablets" on it: two at the neck and two at the feet. A bishop's mandyas additionally has "rivers" on it: three horizontal stripes either of gold (Greek practice) or red and white (Slavic practice).

Monastic clergy wear different headcoverings than married clergy. Married clergy wear either a coloured kalimaukion or skufia; monastic clergy wear a black kalimaukion and veil (together known as the klobuk). For monastics, the skufia is reserved for house dress, and the klobuk is worn in church. Russian archbishops have a jewelled cross attached to the front of their klobuks; Russian Metropolitans wear a white klobuk with jewelled cross. Several Orthodox Patriarchs wear a rounded headcovering called a koukoulion.

A ruling Igumen (so long as he is inside his own monastery) and a bishop may carry his paterissa (crozier) when he is in church. However, the paterissa is never to be carried inside the sanctuary; instead, when he goes into the altar, the paterissa is either handed to an altar server or left leaning against the iconostasis outside the Holy Doors.

In North America and Great Britain, some Orthodox clergy have begun to wear a Roman collar (clergy shirt), though this is discouraged among the more traditional Orthodox.

There exists color and design variations in each autocephalous Church, but these diagrams give some examples of Eastern Orthodox choir dress vestments: 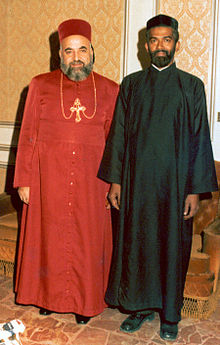 Syriac Orthodox Patriarch of Antioch, Ignatius Zakka I Iwas (in red cassock) and a priest (in black).

In the Syriac Orthodox Church, married priests wear a black skullcap, or phiro, while monastic priests wear the schema, eskimo. For certain sacramental functions, a priest or bishop puts on the epitrachelion (stole). 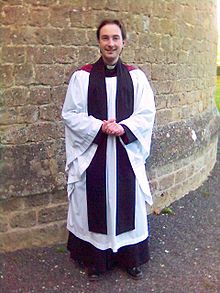 An Anglican priest in choir dress: cassock, surplice and tippet. The dark red of his academic hood can be seen on his shoulders.

What is now referred to as choir dress in Anglicanism was the only vesture permitted to the clergy in the 1552 Prayer Book; the Elizabethan Prayer Book of 1559 added the so-called Ornaments Rubric, which in theory permitted the pre-Reformation eucharistic vestments (chasuble, dalmatic, tunicle, alb, amice, and maniple) along with the cope, that had been in use during the reign of Edward VI. By the 18th century the eucharistic vestments were not in general use although the cope was used for coronations and in certain cathedrals. After the Oxford Movement in the mid-19th century they were restored in many cathedrals and parish churches. In many low-church dioceses and parishes the choir dress continued to be the norm, even at the Eucharist.

The cassock is almost invariably black for priests and deacons. A traditional Anglican cassock is double-breasted, being buttoned on the shoulder rather than up the front (there may be a single button sewn to the center of the chest used to fasten the academic hood if worn). Many Anglican clergy, especially (though not exclusively) those within the catholic tradition of Anglicanism, prefer to wear the Latin single-breasted cassock. The cassock is worn with a cincture, which may take the form of a cloth sash resembling a fascia, or a simple rope girdle or leather belt. Over this is worn the surplice, which is longer and fuller than that worn by Roman Catholic clergy, sometimes reaching well below the knees. Traditionally, an academic hood is worn around the shoulders and down the back, along with a black tippet or scarf worn around the nape and hanging straight down in front. The hood and tippet were once a single garment called an almuce. (The tippet is not to be confused with the stole, which is also worn in a similar manner, but is not part of choir dress, being worn at the eucharist and other sacramental services.) Some clergy also wear Geneva bands (or "preaching tabs") from their collars. Though not worn at service-time, the Canterbury cap is the traditional headgear of Church of England clergy; some prefer the biretta (see below) or mortar board. Neither is widely worn, although the cap, with cassock, gown and tippet, is specified in English canon law as part of the "outdoor habit" or "house dress" of the clergy. At some periods of history a black gown, either academical or 'Genevan', was worn for Morning and Evening Prayer instead of the surplice which was reserved for use at the Holy Communion - the cassock, bands, gown, academical hood and tippet still being the normal liturgical costume for ordained minister of the Church of Scotland and other Reformed and Presbyterian churches.

Chaplains in the Armed Forces wear tippets with officially sanctioned badges and any medals which they have achieved. A bishop or priest may wear a tippet with the arms of the seminary from which he received his degree. In England some cathedral clergy wear tippets on which is embroidered the distinctive symbol or cathedral coat of arms. Members of the high church or Anglo-Catholic parts of the church sometimes wear choir dress of a more Roman Catholic style, including a shorter surplice (or cotta), a stole (and sometimes a biretta), excluding hood and tippet.

Readers officiating in the absence of ordained clergy often wear a blue tippet, or, in the United States, a black tippet displaying the arms of the diocese. At the Eucharist, it may be more fitting for readers of Scripture to wear street clothing to emphasize the role of the laity in recent versions of the Prayer Book. However in some parishes readers wear the traditional vestments of the subdeacon at High Mass: alb fastened with a white cincture and a tunicle. In other parishes they wear the cassock and surplice, as do members of the choir.

Anglican bishops usually wear a purple cassock. Over this, instead of the surplice, they wear the rochet with red or black chimere and matching cuffs, black tippet, and sometimes an academic hood. At the Eucharist they typically wear the alb, stole and chasuble if it is the tradition of the parish; or they may wear a cope (a floor-length vestment with a hood) and mitre (a hat often silk and even embroidered, with two ribbons [or falls] down the back). In evangelical dioceses and parishes they wear the choir dress (rochet, chimere and tippet).