Mata Mansa Devi Mandir
This article is about Hindu temple in Haryana. For other uses, see Mansa Devi Temple, Haridwar.

Mata Mansa Devi is a Hindu temple dedicated to goddess Mansa Devi, a form of Shakti, in the Panchkula district of Haryana state in India. The temple complex is spread of 100 acres (0.40 km2) of the Shivalik foothills in village Bilaspur, near Mani Majra, and Panchkula, 10 km from Chandi Mandir, another noted Devi shrine in the region, both just outside Chandigarh.[1][2][3]

It is one of the prominent Shakti temples of North India. Thousands of devotees visit the shrine from various parts of the country, and especially during the Navratra mela, this number rises to lakhs everyday for the nine auspicious days.

Maharaja Gopal Singh of Mani Majra constructed the present main temple of Shri Mansa Devi, which is situated on the Shivalik foothills in village Bilaspur, Tehsil and District Panchkula, during the period 1811-1815. At a distance of 200 meters from the main temple is the Patiala temple which was constructed by Karam Singh, a Sikh, the then Maharaja Patiala in the year 1840. This temple had the patronage of Manimajra State. After the merger of princely states into PEPSU the Patronage of State Govt. ended and the temples remained neglected. The raja of Manimajra then appointed pujari as ‘khidmatuzar’ of this temple whose duty was to worship the deity of the temple. After the merger of princely State into Pepsu these pujaris became independent on the matter of controlling and managing the affairs of the temple and the land attached to the temple. They could neither maintain this temple nor provide necessary facilities to the visiting devotees and thus the condition of the temple deteriorated day by day. So much so that there were no proper arrangements for pilgrims visiting the temple during Navaratra melas. The complex was in awfully neglected condition till the establishment of the Board. 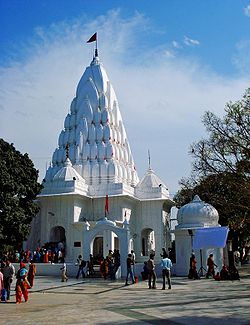 The Patiala temple, within the Mansa Devi temple complex, Panchkula, built in 1840 AD.

Navratra festival is celebrated in the mandir for nine days. Twice in a year millions of devotees visit the temple. Shardiya Navratra mela are organized at the shrine complex during Chaitra and Ashvin months. Every year two Navratra melas are organised in the month of Ashvin (Shardiya, Sharad or Winter Navratra) and other in the month of Chaitra, Spring Navratra by the Shrine Board.

Lakhs of devotees pay obeisance during the Navratra mela held in Ashvin and Chaitra and temples remain open throughout the day. These melas are of 9 days duration each time and concludes on the 9th day. The shrine Board makes elaborate arrangements for the comfortable stay and darshan of the devotees. The board makes arrangements for the provision of Chhowldari, tented accommodation, durries, blankets, temporary toilets, temporary dispensaries, mela police post and lines. During the mela, Duty Magistrates and Nodal Officers are appointed to look after the devotees and smooth conduct of the mela. On the 7th and 8th day of Navratras, the temples of Shrine Complex are closed only for two hours during the night for cleaning maintenance of the temples. For the rest of Navratras, the temples remain open for darshan from 5 a.m. to 10 p.m.[4][5][6]

The temple complex and its environment are presently looked after by Shri Mata Mansa Devi Shrine Board (SMMDSB) Panchkula. In view of the popularity of the temple for its mythological and historical significance and also for fulfilling the wishes of the lakhs of devotees thronging to the complex, Haryana Government by an enactment (Haryana Act No. 14 of 1991) christened as Shri Mata Mansa Devi Shrine Act 1991 took over the control of this temple to provide for better infrastructure development, management, administration and governance of Shri Mata Mansa Devi Shrine and its endowments including lands and buildings attached to the Shrine. A Shrine Board with Chief Minister of Haryana as Chairman was constituted for running of the Temple and preserving the heritage of the region. 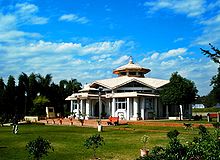 Located at a distance of about 10 km from the Chandigarh bus terminus and 4 km from the Panchkula bus terminus, the Mansa Devi temple can be reached by local buses or autorickshaws. Chandigarh Transport Undertaking and Haryana Roadways supply special buses during the Navratra fair. There are daily flights operated by Indian Airlines & private airlines to Chandigarh. Since it's a popular travel circuit, bookings ought to be made well in advance. Chandigarh is the ideal place to start off if you intend to visit the temple. If you are traveling by train, Chandigarh is the nearest railhead for those heading to Mata Mansa Devi. It is situated on the Chandigarh-Kalka rail line.