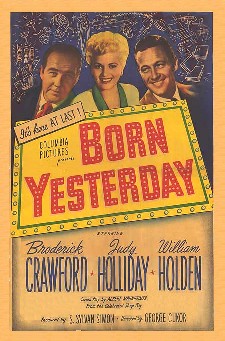 "Born Yesterday" is a 1950 film directed by , which tells the story of a corrupt tycoon who brings his showgirl mistress with him to Washington when he tries to buy a Congressman. He hires a journalist to educate his girlfriend, and in the process, she learns just how corrupt her boyfriend is.

The screenplay was written by , based on the play "" by .

He becomes disgusted with Billie's ignorance and lack of manners (though he himself is much worse) and hires a tutor for her, Paul Verrall (). Blossoming under Paul's encouragement, Billie turns out to be much smarter than anybody knew and begins thinking for herself. The two fall in love.

Meanwhile, Devery had persuaded Harry to sign over many of his assets to Billie to hide them from the government. When Harry needs to get them back, he comes into conflict with Billie's new-found independence. She and Paul use her leverage to escape from Harry's domination; she promises to give him back his property little by little as long as he leaves them alone.

This film shows more post-WWII Washington D.C. than any other film of its time.

In the episode "" of "", JT () cites this movie as the inspiration for the mob boss character in the movie "Cleaver".

The film also won a (the main film award in ) for Foreign Actress (Holiday), and was nominated for the Award and the Best Written American Comedy Award (Mannheimer).