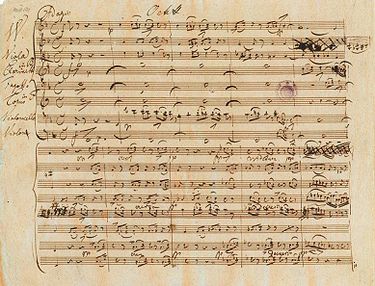 The Octet in F major, D. 803 was composed by Franz Schubert in March 1824. It was commissioned by the renowned clarinetist Ferdinand Troyer and came from the same period as two of Schubert's other major chamber works, the Rosamunde and the Death and the Maiden string quartets.

Consisting of six movements, the Octet takes almost an hour to perform.

The Octet boasts the largest scale for any chamber work by Schubert. It is scored for a clarinet, a bassoon, a horn, two violins, a viola, a cello, and a double bass. This instrumentation is similar to that of the Beethoven Septet, differing only by the addition of a second violin.

In response to a reported request by Troyer for a work similar to Beethoven's Septet, Op. 20, Schubert composed the Octet in early 1824. The work was first performed at the home of Troyer's employer, the Archduke Rudolf (to whom Beethoven's Archduke Trio is dedicated) and included many of the musicians who premiered the Septet.[1]

The basic structure of the movements is similar to those of the Septet, as are many of the key relationships between the movements and principal key (E flat for the Septet, F major of the Octet).[2] The theme of the first movement is derived from Schubert’s song Der Wanderer. The fourth movement variations are based on a theme from Schubert's Singspiel Die Freunde von Salamanka.[3]

A recording of the chamber ensemble of the Academy of St Martin in the Fields with Iona Brown (violin) and Timothy Brown (horn) won a Grand Prix du Disque.[5]