Introduced in October 1977, the NorthStar Horizon was an 8-bit computer system based on the ZiLOG Z80A microprocessor. It was produced by North Star Computers, and it could be purchased either in kit form or pre-assembled.[1] 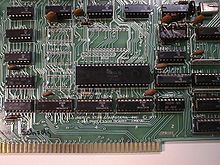 A Z80 processor board for the NorthStar Horizon 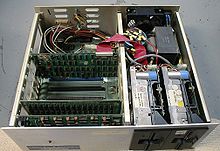 An inside view of the NorthStar Horizon

The computer consists of a steel chassis separated into left and right compartments with a plywood cover which sat on the top and draped over the left and right sides. The motherboard was based on the S-100 bus common in its day. Although a few logic circuits were on the motherboard, primarily for I/O functions, both the processor and the memory resided in separate daughterboards. It contains an internal discrete linear power supply, including a large transformer and power capacitors, comprising much of the bulk and weight of the system.

Capable of running CP/M and NSDOS (NorthStar's proprietary Disk Operating System), a standard NorthStar system sported one or two hard-sectored 5.25 inch floppy disk drives and a serial interface to which one could connect a terminal to interact with it.

NSDOS included NorthStar BASIC, a slightly non-standard dialect of BASIC, where some standard BASIC commands of the day had been changed, probably to avoid potential legal issues. Two examples of this were the FILL and EXAM commands, which took the place of the more common PEEK and POKE.

Superseded by the all-in-one NorthStar Advantage in 1983, the NorthStar Horizon found a niche in University environments where its inbuilt S-100 bus could be used to interface it to a variety of control systems.

Northstar released a Hard disk version, with an internal full height 5Mb MFM drive. They also released a S100 card with integrated memory and two serial ports which allowed up to eight users on one Horizon, each with their own CPU sharing the disk and other resources. This operated under TurboDOS, a multi user CP/M variant with some unix like features.