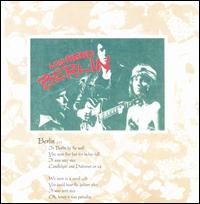 "Berlin" is a 1973 album by , his third solo album and the follow-up to the widely accessible and upbeat glam rock classic "Transformer". RS500|344

The album is a tragic about a doomed couple that addresses themes of drug use and depression. Upon its release, the response of fans and critics was not positive as many were expecting another upbeat glam outing.fact|date=March 2008 Despite lukewarm reviews the album reached #7 in the UK album chart (Reed's best achievement there). Poor sales in the US (#98) and harsh criticism made Reed abandon the album and in subsequent years he rarely played any 'Berlin' material in his live shows. Over time many have come to consider 'Berlin' to be among Lou Reed's best studio albums as a solo artist.fact|date=March 2008

Musically, "Berlin" differs greatly from the bulk of Reed's work, due to the use of heavy orchestral arrangements, horns, and top session musicians. Instrumentally, Reed himself only contributes acoustic guitar.

"The Kids" tells of Caroline having her children taken from her by the authorities, and contains a particularly upsetting mid-section featuring the sounds of children shouting for their mother. This segment is so harrowing that a legend has arisen telling how producer went home one night and told his children that their mother had (in different versions) either left them or died, and recorded their response.fact|date=March 2008 Later, Ezrin dispelled this myth, stating that he had just asked to his younger son to go to bed...fact|date=March 2008 In actuality, Joshua Ezrin, Ezrin's youngest son, was outside the screen door of their house for a few minutes, and while he was pleading to be let back inside, his cries were recorded and put on the album.fact|date=March 2008 take their name from a line in this song.

Staring at my picture book She looks like Mary, Queen of Scots She seemed very regal to me Just goes to show how wrong you can be

The song's chorus features an orchestral theme similar to one that later appeared in 's "", which Ezrin co-produced.

As with Reed's previous two studio albums, "Berlin" re-drafts several songs that had been written and recorded previously. The title track first appeared on Reed's solo debut album, only here it is lyrically simplified, the key changed, and re-arranged for piano. "Oh, Jim" makes use of the outtake, "Oh, Gin". "Caroline Says (II)" is a rewrite of "" from "VU". The Velvets had also recorded a rather sedate demo of "Sad Song", which had much milder lyrics in its original form. "Men of Good Fortune" had also been played by the Velvets as early as 1966; an archival CD featuring live performances of the band playing at 's Factory provides the evidence of the song's age. The CD featuring the early performance of "Men of Good Fortune" is not for sale and can only be heard at the Warhol museum in Pittsburgh, Pennsylvania.

Reed and Ezrin planned a stage adaptation of the album upon its initial release but shelved the plans due to mixed reviews and poor sales. In Reed fulfilled his original hopes by touring the album with a 30 piece band and 12 choristers. [ [http://www.guardian.co.uk/g2/story/0,,2096257,00.htm The day the wall came down | The Guardian | Guardian Unlimited ] ] Director filmed the concert and released in 2008 as "Lou Reed's Berlin", which opened to strong reviews. [ [http://www.imdb.com/title/tt1093836/ Lou Reed's Berlin (2007) ] ] [ [http://www.rottentomatoes.com/m/10008853-lou_reeds_berlin/ Lou Reed's Berlin Movie Reviews, Pictures - Rotten Tomatoes ] ] The album was digitally re-mastered and re-released on compact disc to commemorate the event.

All tracks composed by Lou Reed