Andrew John "Drew" Lachey (born August 8, 1976) is an American singer and actor, known as a member of 98 Degrees, the winner of the second season of Dancing with the Stars, and the younger brother of Nick Lachey.

Drew Lachey was born in Cincinnati, Ohio. He was a combat medic in the United States Army, was an Emergency medical technician (EMT) in NYC, worked in a deli, and was a camp counselor at the age of 16. He attended the School for Creative and Performing Arts (SCPA) in the Cincinnati Public School District.

He was a member of the pop group 98 Degrees, alongside his brother Nick Lachey, and other band members, Justin Jeffre and Jeff Timmons. Since 98 Degrees, Lachey made a guest appearance on Hollywood Squares in 2001, performed on Broadway as Mark Cohen in the musical Rent from January 3 to March 21, 2005, and has also had several guest appearances on Nick's MTV show Newlyweds: Nick and Jessica. In June 2008, Lachey joined the Broadway company of Monty Python's Spamalot as Patsy, the faithful manservant to King Arthur and stayed with the show for three months. 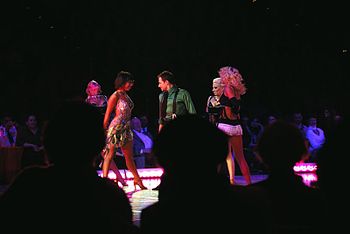 Drew and Cheryl Burke on Dancing with the Stars

Lachey was a celebrity dancer on the second season of Dancing with the Stars with professional dance partner Cheryl Burke. At the beginning of the sixth week of competition (aired in February 2006), Lachey and Burke earned a perfect score of 30 with their tango. In the eighth and final week, they earned a score of 30 on each of their two dances, the Paso Doble and freestyle, giving them the highest score for the week. On February 26, 2006, they were crowned the champions of Dancing with the Stars.

From December 2006 to February 2007, Drew toured both Canada and the United States for the Dancing with the Stars Tour. On the April 17, 2007 results show, Lachey made a surprise appearance to reprise his "Save a Horse (Ride a Cowboy)" freestyle dance with Cheryl Burke. He co-hosted the first 3 weeks of the fifth season of Dancing with the Stars, temporarily replacing Samantha Harris during her maternity leave. He also stepped in for Tom for one episode.When Gloria Estefan had to pull out of the October 16, 2007 results show for personal reasons, Lachey returned to dance a foxtrot with Cheryl. After the show, Drew and Cheryl were rumored to have been having an affair. Both denied this story.

Drew was featured on the show Overhaulin' when brother Nick Lachey worked with Chip Foose to steal and customize Drew's 1967 Ford truck.

Lachey was also presenter of HGTV's spring 2009 series the reality show where five neighboring families competed for the chance to win $250,000 to pay off their mortgage by competing in home-improvement challenges.

Lachey served as guest host for The Price Is Right Live! in Las Vegas in August 2010.

Lachey married Lea Dellecave on October 14, 2000. They were childhood and high-school sweethearts, and she was the choreographer for 98 Degrees, as well as one of the dancers. Their first child, daughter Isabella Claire Lachey, was born on March 23, 2006 in Los Angeles, California, weighing 7 lb 2 oz (3.2 kg). On December 14, 2009, it was announced that the couple was expecting their second child, a boy, due in Spring 2010.[1] On May 15, 2010, the couple welcomed son Hudson Nicholas Lachey in Cincinnati, Ohio.[2]