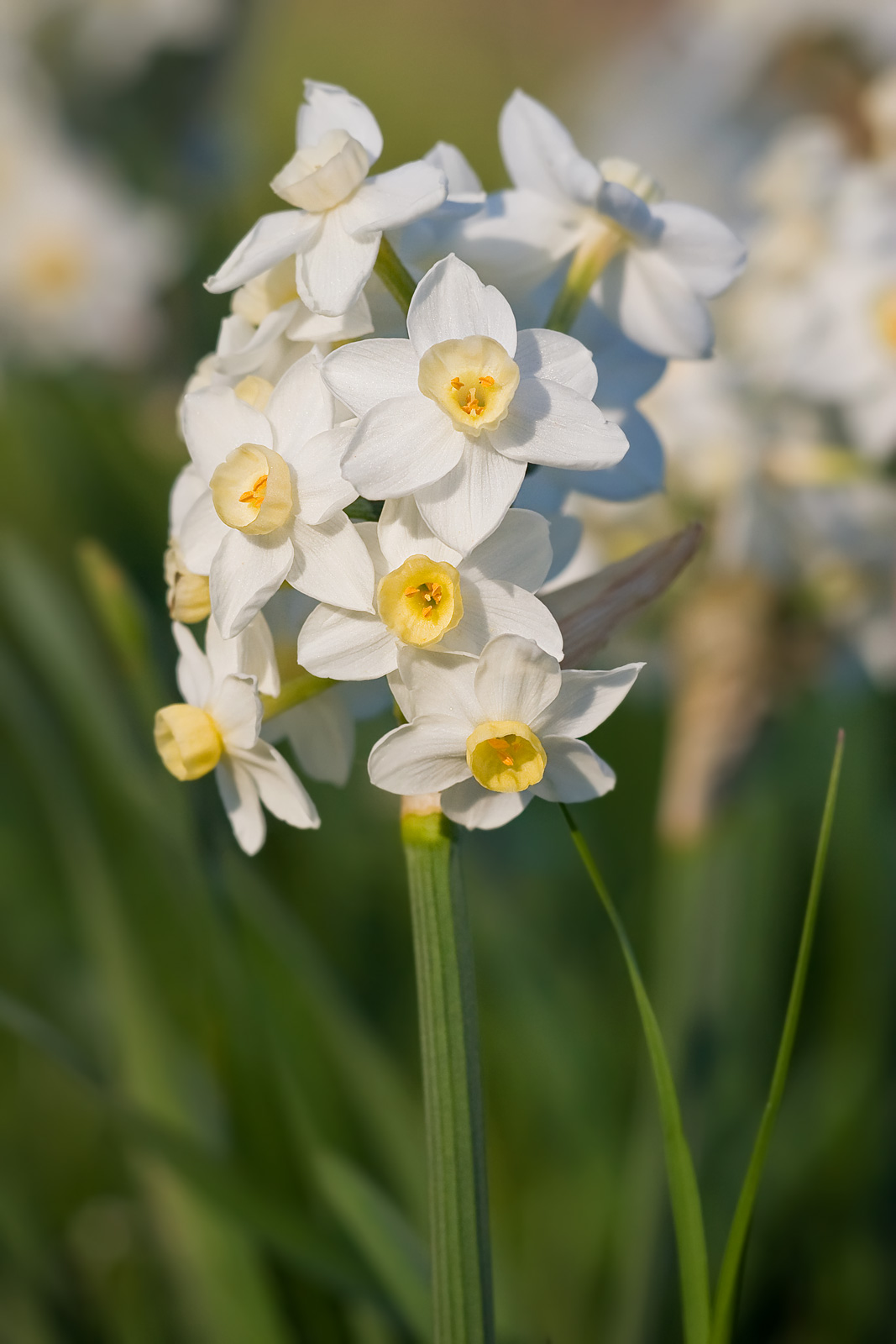 "Narcissus" is the botanic name for a of mainly hardy, mostly spring-flowering, s in the family native to Europe, North Africa, and Asia. There are also several "Narcissus" species that bloom in the autumn. Though "Hortus Third"

There are two derivations of the name. One is that of the youth of Greek mythology called Narcissus, who, in at least one of many variations of the tale, became so obsessed with his own reflection as he kneeled and gazed into a pool of water that he fell into the water and drowned. In some variations, he died of starvation and thirst from just sitting by the edge of the pool until he gave out, gazing at his reflection until he died. In both versions, the Narcissus plant first sprang from where he died. The other derivation is that the plant is named after its narcotic properties ("narkoa", to numb in Greek). [http://www.botanical.com/botanical/mgmh/n/narcis01.html]

The name Daffodil is derived from an earlier "Affodell", a variant of . The reason for the introduction of the initial "d" is not known, although a probable source is an etymological merging from the Dutch article "de," as in "De affodil." From at least the sixteenth century "Daffadown Dilly", "daffadown dilly", and "daffydowndilly" have appeared as playful synonyms of the name.

The name jonquil is sometimes used in , particularly in the , but strictly speaking that name belongs only to the rush-leaved "" and cultivars derived from it. In the southern United States, narcissus are sometimes referred to as buttercups.Fact|date=May 2008

Flowers of the tazetta-group species "" are commonly called paperwhites.

All "Narcissus" species have a central trumpet-, bowl-, or disc-shaped corona surrounded by a ring of six floral leaves called the which is united into a tube at the forward edge of the 3-locular . The seeds are black, round and swollen with hard coat. The three outer segments are s, and the three inner segments are s. Though the traditional daffodil of folklore, poetry, and field may have a yellow to golden-yellow color all over, both in the wild species and due to breeding, the perianth and corona may be variously colored. Breeders have developed some daffodils with double, triple, or ambiguously multiple rows and layers of segments, and several wild species also have known double variants.

All Narcissus varieties contain the alkaloid poison , mostly in the bulb but also in the leaves . [ [http://extension.missouri.edu/explore/qa/foodnutrition0006.htm Food and nutrition Daffodil dinner] David Trinklein, Department of Horticulture, University of Missouri, Accessed March 2008]

In (traditional Japanese medicine), wounds were treated with narcissus root and wheat flour paste, [cite web|url=http://www.ittendojo.org/articles/general-8.htm|title=Kampo — The Japanese Art of Herbal Healing|author=Carmen Altomonte] though it does not appear in the modern . The Roman physician listed narcissus root in "De Medicina" among medical herbs, described as emollient, erodent, and "powerful to disperse whatever has collected in any part of the body". In one scientific study, the ethanol extract of the bulbs was found effective in one mouse model of , para- induced abdominal constriction, but not in another, the hot plate test. [PMID 9379365]

One of the most common problems for florists, "daffodil itch" involves dryness, fissures, scaling, and erythema in the hands, often accompanied by (thickening of the skin beneath the nails). It is blamed on exposure to in the sap. [ [http://www.floridata.com/ref/n/narc_spp.cfm Floridata: Narcissus spp ] ] [ [http://www.telemedicine.org/botanica/bot7.htm Electronic Textbook of Dermatology-Botanical Dermatology , Occupational Plant Dermatoses ] ]

The daffodil is the national flower of . One species, "", grows only in a small area around . In it is traditional to wear a daffodil or a on (). This has led to suggestions that the word "daffodil" may have been influenced by the name "Dafydd," a Welsh form of "David" (see Etymology).

In some countries the yellow variation is associated with .

The flower is a common decoration during .

's short poem "" has become linked in the popular mind with the daffodils that form its main image.

In the movie "", Edward Bloom plants a field of daffodils outside of Sandra Templeton's window in order to win her heart.

There is a Daffodil Festival in Nantucket, MA the last weekend in April of every year. In this celebration of spring hundreds of antique cars are adorned with thousands of daffodils.

In the visual novel , which is named after the flower, a pair of patients with es (one with cancer) escape from to journey to an island filled with daffodils.

The American Daffodil Society - ADS [http://daffodilusa.org] divides all "Narcissus" into 13 horticultural divisions, based partly upon flower form and partly upon genetic background. Since the ADS Web site is written for general consumption, the text of the descriptions contained there is relatively broad.

Daffodils may be self-colored—i.e., both perianth and corona identical in color and shade—or the colors between the perianth and corona may differ widely. Some perianths and some coronas also may contain more than one color or shade. Prevalent colors are all shades and tones of yellow, white, orange, pink, red and green. Pinks vary from apricot to rose in shades from pale to deep, and some more recent cultivars have hints of lavender or lilac. Reds vary from orange-red to salmon red to near scarlet. Pink, red, orange and green tones are mainly confined to the corona. However, breeders are currently working against the genera's natural pigmentation and genetic barriers to create cultivars in which pink, rose, red, orange and green tones suffuse or "bleed" from the more highly colored coronas onto the perianth segments of white or yellow. There are an increasing number of commercially available varieties which display this enhanced coloration.

The flower's two regions are assigned color somewhat differently. The perianth colors are assigned from (in the case of multiple colors) the outer edge of the segment inward to the base of the corona. The corona colors are assigned from the base of the corona outward to the rim. Thus, "Actaea", a Poeticus (Division 9) Daffodil pictured below, is officially classified as 9 W-GYR, while "Accent", a Large Cup (Division 2) Daffodil possessing a white perianth and a pink corona, is officially classified as 2 W-P.