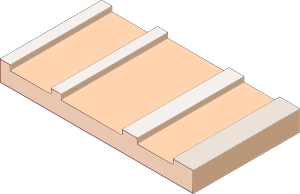 Depressions are cut into a printing plate. The plate shown here is not to scale: the grooves can be fractions of a millimetre wide.

The plate is covered in ink

The ink is wiped off the surface of the plate, but remains in the grooves

Paper is placed on the plate and compressed, such as by a heavy roller

The paper is removed, and the ink has been transferred from the plate to the paper

Micro-topography of an ordinary french post stamp (detail) showing the thickness of ink obtained by intaglio. The words "la Poste" appeared in white on red background and hence corresponds to areas with a lack of ink.

Intaglio (pronounced /ɪnˈtæli.oʊ/ in-tal-ee-oh) is a family of printmaking techniques in which the image is incised into a surface, known as the matrix or plate, and the incised line or area holds the ink. Normally, copper or zinc plates are used as a surface, and the incisions are created by etching, engraving, drypoint, aquatint or mezzotint. Collographs may also be printed as intaglio plates.

In the form of intaglio printing called etching, the plate is covered in a resin ground or an acid-resistant wax material. Using an etching needle, or a similar tool, the image is etched into the ground, revealing the plate underneath. The plate is then dipped into acid. The acid bites into the surface of the plate where it was exposed from the etching. Biting is a printmaking term to describe the acid's incising of the image.[1] After the plate is sufficiently bitten, the plate is removed from the acid bath, and the ground is removed to prepare for the next step in printing.[2]

To print an intaglio plate, ink is applied to the surface by wiping and/or dabbing the plate to push the ink into the bitten grooves [3]. The plate is and then rubbed with tarlatan cloth to remove most of the excess ink. The final smooth wipe is often done with newspaper or old public phone book pages, leaving ink only in the incisions. A damp piece of paper is placed on top of the plate, so that when going through the press the damp paper will be able to be squeezed into the plate's ink-filled grooves.[4] The paper and plate are then covered by a thick blanket to ensure even pressure when going through the rolling press. The rolling press applies very high pressure through the blanket to push the paper into the grooves on the plate.[5] The blanket is then lifted, revealing the paper and printed image.

Intaglio engraving, as a method of making prints, was invented in Germany by the 1430s, well after the woodcut print. Engraving had been used by goldsmiths to decorate metalwork, including armour, musical instruments and religious objects since ancient times, and the niello technique, which involved rubbing an alloy into the lines to give a contrasting colour, also goes back to late antiquity. It has been suggested[by whom?] that goldsmiths began to print impressions of their work to record the design, and that printmaking developed from that.

Martin Schongauer was one of the earliest known artists to exploit the copper-engraving technique, and Albrecht Dürer is one of the most famous intaglio artists. Italian and Netherlandish engraving began slightly after the Germans, but were well developed by 1500. Drypoint and etching were also German inventions of the fifteenth century, probably by the Housebook Master and Daniel Hopfer respectively. The golden age of artists engraving was 1450-1550, after which the technique lost ground to etching as a medium for artists, although engravings continued to be produced in huge numbers until after the invention of photography. Today intaglio engraving is largely used for currency, banknotes, passports and occasionally for high-value postage stamps. The appearance of engraving is sometimes mimicked for items such as wedding invitations by producing an embossment around lettering printed by another process (such as lithography or offset) to suggest the edges of an engraving plate.

Apart from intaglio, the other traditional families, or groups of printmaking techniques are: