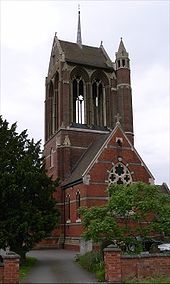 A redundant church is a church building that is no longer required for regular public worship. The phrase is particularly used to refer to former Anglican buildings in the United Kingdom, but may refer to any disused church building around the world. Reasons for redundancy include population movements, changing social patterns, merging of parishes, decline in church attendance or other factors. Although once simply demolished or left to ruin, today many redundant churches find new uses as community centres, museums, houses or other more innovative solutions.

There are a number of reasons for a church building being declared redundant, although it is primarily due to a reduction in the number of regular Sunday worshippers, which fell since the late 1980s to about 1.7m in 2008.[1][2] Other reasons include the amalgamation of parishes, or a preference for another building where two churches exist in close proximity, for example at Swaffham Prior, Cambridgeshire. Population shift is another factor; for example, many redundant churches were formerly maintained in parishes situated in deserted or shrunken medieval villages (such as Wharram Percy in Yorkshire) and there are many disused churches in the now-sparsely-populated square mile of the City of London.

The aim of the closure process is to find new uses for them. Responsibility for doing this rests with the diocese. Some closed churches remain consecrated in occasional use by the Church of England. Some are purchased by other denominations or faiths for regular use. Several charitable trusts have been set up to preserve churches of particular architectural merit, such as the Churches Conservation Trust in England or the Friends of Friendless Churches in Wales (although the latter also maintains a number of churches in England). Similarly, in Scotland the Scottish Redundant Churches Trust cares for several former Church of Scotland church buildings.

Closed churches can have a variety of uses. Depending on the listed status of a building, many can be converted for other uses. Several former churches are used as community or education centres, for example All Saints' Church, Bristol or All Saints Church, Harthill. Likewise, Holy Trinity Church, Chester now serving as the town's Guildhall or St Michael's Church, Chester as a heritage centre. St Peter's Church, Offord D'Arcy managed by the Churches Conservation Trust is used to host festivals, including a film festival.

Others are used in more unusual ways; Old St Ann's Church, Warrington is an indoor climbing centre (one of several churches used in this way), other former churches may be art galleries, coffee shops and even pubs and clubs. Many are converted into residential properties.[2]

However, in some cases, such as the grade I listed St Ninian's, Brougham, a Churches Conservation Trust church, the remote location means that it cannot be used for an alternative purpose and is rarely used for worship.

The popularity of Methodism, and other non-conformist churches in the 19th century has led to a large number of chapel buildings which cannot be sustained; at their height, various Methodist factions ran about 14,000 chapels in the United Kingdom. Today, the united Methodists own just over 6,000 chapels and dispose of roughly 100 each year.[2] Particularly significant chapels may be taken into the care of the Historic Chapels Trust.