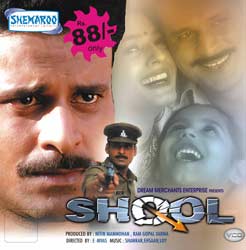 
"Shool" is a 1999 film by director which portrays the politician-criminal nexus and the criminalization of politics in the state of , and its effect on the life of an honest police officer. The film starred as Inspector Samar Pratap Singh and as the borderline psychopath criminal-politician Bachhu Yadav. The film has won three awards.

Inspector Samar Pratap Singh (Bajpai) gets transferred to district (Bihar), which is ruled by local politician and criminal Bachhu Yadav (Shinde) and his henchmen. Singh is an idealist who respects the constitution and the law, and expects that everyone else should do the same. But no one follows the law in Motihari, including the policemen who receive weekly payments from Yadav to do his bidding.

One day, the District Superintendent of Police () asks Singh to go and break up a fight between two rival gangs, and arrest the people who attacked some of Yadav's men. Singh investigates and finds that Yadav's men were the real culprits, and so arrests them instead. When the DSP orders him to release them, he refuses to do so. But the court releases them because the men who were beat up are not willing to testify.

Things begin deteriorating and Singh soon finds himself alone in his fight against a corrupt and rotten system. He does not give up, even when he gets suspended under false charges of assaulting the DSP. But things change after his daughter dies when he took on some of Yadav's men who passed lewd comments on his wife and daughter. Yadav kills one of his men and puts the blame on Singh. And the police arrest Singh while he is still grieving over his daughter's dead body. Singh's parents come to help him, and his father () goes and pleads with Yadav to get him released. When Singh realizes that Yadav was behind his release, he insults Yadav.

A few days later, Singh's parents leave, and he has a big fight with his wife () over their situation and her accusation that his idealism was to blame. He leaves in anger, and his wife consumes poison. His only friend in town, Tiwari (), informs him about it and both rush to the hospital. Singh manages to speak a couple of sentences with her before she dies.

Singh now loses it. He goes home, wears his uniform, visits the police station and steals a pistol. He then fights his way into the state legislature which is in session, enters the well of the house, finds Yadav and drags him to the Speaker's dais. After an emotional appeal to members of parliament on the leadership crisis and criminalization of politics that was rotting the entire system, he shoots and kills Yadav.