Chester Charles Bennington (born March 20th, 1976) is an American musician, singer-songwriter and actor. He is best known as the lead vocalist and songwriter of the rock band Linkin Park.

Bennington became known as a vocalist with Linkin Park's debut album, Hybrid Theory, in 2000, which was a massive commercial success. The album was certified Diamond by the RIAA in 2005, making it the best-selling debut album of the decade, as well as one of the few metal albums to ever hit that many sales.[1] Linkin Park's following studio albums, Meteora, Minutes to Midnight, and A Thousand Suns, released in 2003, 2007, and 2010 respectively, continued the band's success. Bennington formed his own band, Dead by Sunrise as a side-project in 2005. The band's debut album, Out of Ashes was released on October 13, 2009. In 2007, Bennington was placed at #46 on Hit Parader's list of "Heavy Metal's All-Time Top 100 Vocalists".[2] 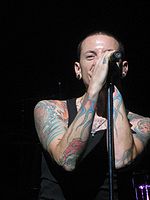 Bennington was born in Phoenix, Arizona.[3] He attended Greenway High School. He took interest in music at a young age, citing Depeche Mode and Stone Temple Pilots as early inspirations. Bennington's parents separated in the late 1980s. He later struggled with cocaine and methamphetamine addictions.[3] Bennington eventually overcame his drug addiction, and would go on to denounce drug use in future interviews.[4] He worked at a fast food restaurant before starting his career as a professional musician.[3]

Before joining Linkin Park, Bennington was a vocalist in Grey Daze, a grunge band from Phoenix, Arizona.[5] He left Grey Daze in 1998, but struggled to find another band to sing in.[5] After nearly quitting his musical career altogether, Jeff Blue, the vice president of A&R at Zomba Music in Los Angeles, offered Bennington an audition with the future members of Linkin Park.[5] Bennington quit his day job, and took his family to California, where he had a successful audition with Linkin Park, who were then called "Xero".[5] Bennington and Mike Shinoda, the band’s other vocalist, made significant progress together, but failed to find a record deal.[5] After facing numerous rejections, Jeff Blue, now a vice president of A&R at Warner Bros., intervened again to help the band sign with Warner Bros. Records.[5]

On October 24, 2000 Linkin Park released their debut album through Warner Bros. Records. Bennington and Shinoda wrote the lyrics to Hybrid Theory based on some early material.[6] Shinoda characterized the lyrics as interpretations of universal feelings, emotions, and experiences, and as “everyday emotions you talk about and think about.”[7][8] Bennington later described the songwriting experience to Rolling Stone magazine in early 2002:

Hybrid Theory was released in the United States on October 24, 2000 following the debut of "One Step Closer" on the radio.[9] It entered the U.S. Billboard 200 charts at #16 in late 2000,[10] and was certified gold by the RIAA five weeks after its release.[11] In 2001, Hybrid Theory sold 4.8 million copies in the United States, making it the best-selling album of the year,[12][13] and it was estimated that the album continued selling 100,000 copies per week in early 2002.[6] Throughout the following years, the album continued to sell at a fast pace and was certified diamond by the RIAA in 2005 for selling 10 million copies in the U.S.[14] It has sold 24 million copies worldwide as of 2009,[15] including over 10 million in the U.S. which makes it the band's best-selling album and the best-selling debut album of the 21st century.[16]

The follow-up to Hybrid Theory would ultimately become Meteora. The band began to work on new material amidst their saturated schedule, spending a sliver of their free time in their tour bus' studio.[17] The band officially announced the production of a new studio album in December 2002, revealing their new work was inspired by the rocky region of Meteora in Greece, where numerous monasteries have been built on top of the rocks.[18] Meteora featured a mixture of the band's previous nu metal and rapcore styles with newer innovative effects, including the induction of a shakuhachi (a Japanese flute made of bamboo) and other instruments.[19] Linkin Park's second album debuted on March 25, 2003 and instantly earned worldwide recognition,[19] going to #1 in the US and UK, and #2 in Australia.[20]

Linkin Park returned to the recording studios in 2006 to work on new material. To produce the album, the band chose Rick Rubin. Despite initially stating the record would debut sometime in 2006, it was delayed until 2007.[21] The band had recorded thirty to fifty songs in August 2006, when Shinoda stated the album was halfway completed.[22] Bennington later added that the new album would stray away from their previous nu metal sound.[23] Warner Bros. Records officially announced that the band’s third studio album, entitled Minutes to Midnight, would be released on May 15, 2007 in the United States.[24] After spending fourteen months working on the album, the band opted to further refine their album by removing five of the original seventeen tracks. The album’s title, a reference to the Doomsday Clock, foreshadowed the band's new lyrical themes.[25] Minutes to Midnight sold over 600,000 copies in its first week, making it one of the most successful debut week albums in recent years. The album also took the top spot on the Billboard Charts.[26] Linkin Park's newest album, A Thousand Suns, was also co-produced with Rick Rubin and was released on September 14, 2010, with its first single, "The Catalyst", a success. In June Chester Bennington was at the LPU summit in Hamburg in which he did a cover of Adele's version of Rolling in the Deep with Mike Shinoda playing the piano.

Chester Bennington has two children from a previous relationship with Elka Brand; Jamie and Isaiah.[27] Bennington married his first wife, Samantha Marie Olit, on October 31, 1996.[27] They have one child together, Draven Sebastian Bennington, who was born on April 19, 2002.[27] Bennington’s relationship with his first wife declined during his early years with Linkin Park, and they divorced in 2005.[28] After divorcing his first wife, Bennington married Talinda Ann Bentley, a former Playboy model,[27] with whom he has had a child, Tyler Lee Bennington. The wedding ceremony was custom designed and performed by Mary Jean Valente of "A Ceremony of the Heart". Bennington and his family live in a house in Gilbert, Arizona when he is not on tour.[29]

In September, 2011, Chester confirmed that he and wife, Talinda, are expecting twins.[30]

Chester and Talinda were harassed by a cyberstalker, Devon Townsend, for almost a year. Townsend was found guilty of tampering with the couple's email, as well as sending threatening messages, and was sentenced to two years in prison.[29]

Bennington is a tattoo enthusiast.[31] Bennington has done work and promotions with Club Tattoo, a recognized tattoo parlor in Tempe, Arizona.[32][33] 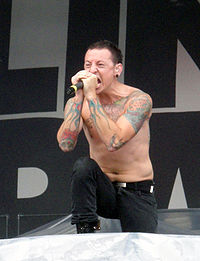 Despite having success in the early 2000s, Bennington has had medical issues outside of the limelight. He suffered a severe bite from a recluse spider while touring with the OzzFest in 2001.[34] Bennington was plagued with poor health during the making of Meteora, and struggled to attend some of the album’s recording sessions.[35] He fell ill during the summer of 2003, and eventually underwent surgery.[36] Bennington sustained a wrist injury in October 2007 while attempting to jump off a platform during a show in Melbourne, Australia at the Rod Laver Arena. Despite the injury, he continued to perform the entire show with a broken wrist, before heading to the emergency room. Soon after breaking his wrist he hit himself in the face with a tennis racket. He received 5 stitches. Bennington also injured his back once, while performing a live show.[37][38]

In 2011, Bennington fell ill again, and Linkin Park were forced to cancel three shows and reschedule two from the A Thousand Suns World Tour.[39]. Bennington injured his shoulder during the band's tour in Asia and was advised by doctors to have immediate surgery, cancelling their final show at Pensacola Beach, Florida and ending their tour.[40]

Bennington joined Z-Trip in 2005 for the single "Walking Dead", released on Z-Trip's major label album Shifting Gears. "Walking Dead" was a Top Ten Single in the US. Bennington also made a surprise appearance during Z-Trip's performance at the Coachella Valley Music and Arts Festival in 2005.

"Both bands are the same. The one where Chester sings and writes is Dead By Sunrise, but when I sing, and Amir and I are the primary writers, it becomes Julien-K and it's more electro and much darker... Julien-K and Dead by Sunrise are basically a creative collective, we're sort of a Warhol-style factory in that sense... Dead by Sunrise is Chester's Julien-K if that makes any sense"[42]

Chester Bennington executive produced the E.P for Los Angeles, Tripduster band Hellflower, which is fronted by his long time friend and Director of Activities (D.O.A), Church.[43]

Bennington also made a cameo in the 2006 film Crank as a customer in a pharmacy.[44] He later appeared as a horse-track spectator in the film's 2009 sequel, Crank: High Voltage.[45] Bennington also had a role as the ill-fated Skinhead, Evan, in the 2010 film Saw 3D.[46]

Chester Bennington is working with his long time friend and director of activities, Church, on developing an upcoming television show, Mayor of the World, with executive producers Trip Taylor.[47]