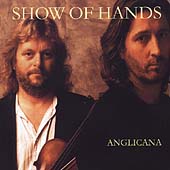 Show of Hands is an English acoustic roots and folk duo comprising and . Their appeal is based on the combined power of Knightley's original songs, the quality of their vocals and harmonies, and their multi-instrumental virtuosity. Their performances feature s, , , fiddle, cuatro, and .

Steve Knightley and Phil Beer met as teenagers while playing in different bands in , , where they grew up. They eventually got together and for a short period played in pubs and clubs, even undertaking a disastrous summer tour of when they were both 16. As school finished, their lives went separate ways. Knightley went to university in , collected a degree and teaching qualifications, and ended up in playing music in a rock band in his spare time. For Phil Beer the leap to professional musician was immediate. Throughout the years he played with many different people, including the and then from 1984 with the . In the mid 1980s Knightley returned to live in the , and so he and Phil Beer got together casually to play a few shows. This continued until 1991 when it became obvious that the partnership had the potential to become a full time career. Beer left the Albion Band and Show of Hands was born.

The first Show of Hands recordings were three cassettes, recorded on home studios. A selection of the best tracks from those cassettes was later released on the "Backlog" compilation album in 1995. Their first album was, unusually, a live album. Recorded at the Bull Hotel in , , and titled "Live '92", the excellent reviews it garnered helped them break into the festival circuit of 1993, and later that same year they toured with on his autumn tour.

During 1992 Knightley and Beer were invited to join an inter-cultural music project which involved working with three exiled musicians. Out of this the band Alianza was formed and an album made. Alianza toured throughout 1992 and 1993 and influenced the duo greatly. They were introduced to a new range of rhythms and instruments and Steve was inspired to write songs that are now favourites with Show of Hands fans including "Santiago", "Armadas" and "Columbus Didn't Find America". Some of these found their way onto the first Show of Hands studio album "", which was released in 1994.

In 1995 Show of Hands released their second studio album "". The album proved a turning point as it gathered in reviews from major publications hailing it as a masterpiece and a classic. Mojo said the album created "a powerful, fresh sounding music with both integrity and widespread appeal", while called it a "startlingly good" album and went one further in voting it their folk album of the year in 1996.

With thousands of fans on their , Show of Hands had long wanted to play a concert big enough to gather all those fans together. Different ideas were brought up but none seemed right until London's was suggested; the perfect venue, prestigious and big enough! The undertaking required a huge gamble by the duo and their management, but the show sold out in advance and took place on the evening of .

As is implied by the album name, "Covers", the studio album released in 2000, contained only of songs by other artists. The songs were selected from ones that the duo had performed at concerts or sound checks over the years, and included music from artists such as Jethro Tull, , and .

In 2001 Show of Hands celebrated their tenth anniversary with another sell out show at the Royal Albert Hall. The concert was recorded by Carlton TV for network transmission and was shown as two dedicated half-hour programmes.

Their next studio album "" was released in 2001 and was the first album to be recorded by Mick Dolan, who took responsibility for the Show of Hands sound after producer/manager Gerard O'Farrell returned to his native . "", the first instrumental album by Show of Hands, was released in 2003 and is a celebration of the sights and sounds of the West Country coast. Each track is named after a different location, and creates an atmospheric musical portrait of the sea, and the seaside. In October 2003, the album "Country Life" was released. This studio recording of Knightley's most recent songs also featured a special bonus CD with alternative mixes of selected tracks.

Show of Hands won the "Best Live Act" award at the 2004 . The winning of that particular award was especially pleasing to the duo as for that year it was voted on by the public and not by the usual panel of judges. At the 2005 awards they were nominated for "Best Duo" and were part of the Big Session group that won the "Best Group" award.

For their extensive tour in autumn 2004 the duo temporarily became a trio when they were joined by Miranda Sykes on and vocals. Although initially reluctant, audience enthusiasm convinced them that the time was right for another Show of Hands live album. "We realised that we had the raw material to create a double album that would hopefully capture a song, a set or a moment in all of our musical lives." - Steve Knightley. "", a live , was released in 2005 and comprised 22 tracks recorded at various venues during the autumn tour. Miranda has since toured extensively with Show of Hands, and there were few shows in 2005 and 2006 where she was absent from the lineup.

In May 2006, Show of Hands released their ninth studio album "Witness". The album was produced by and Simon ‘Mass’ Massey from the Afro Celts.

In November 2006, they were voted the "Greatest Devonians" in Devon County Council's competition, with more than a third of the votes. Other contenders included , , and Muse. For more details see http://www.devon.gov.uk/press_greatest_devonian_-_result. Their support of local good causes has ranged from continued fundraising for a children's hospice in the county to playing a special concert in Sandford to raise money to save the village Post Office there.

Show of Hands played London's for a concert on the , which was their 3rd performance there. This was to celebrate their 15 year partnership as Show of Hands.

Their long career and loyal local following has led to several reasonably well known tribute acts on the Devon pub circit. In is believed that Show of Hands are very supportive of these acts, as they are keen to support live music in pubs. The two most notable acts are "Show of Wangs" and "Mad Merlins Magic Minstrals." Show of Wangs are actually Truro based 4 piece jazz/folk-rock combo The Jellybeats, who have been touring since the 1970s. Show of Wangs "Phil Lager and Steve Pornley" is a spoof, usually done as part of their Saturday night show. Mad Merlin's lads are a part time , mixed membership band who occasionally perform covers of show of hands most popular, upbeat and positive songs. The long running joke is that because these songs don't exist, they don't actually do anything.