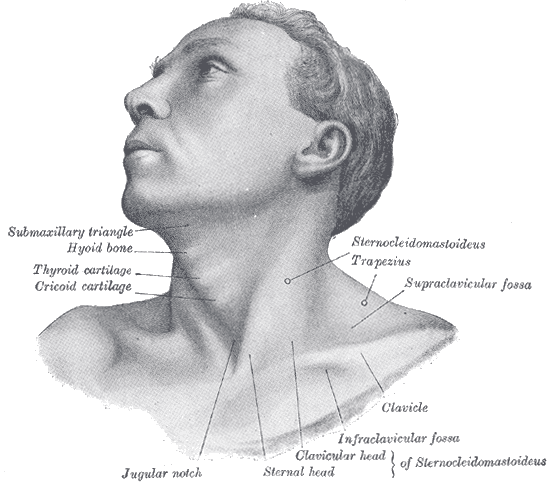 Caption2 = The ligaments of the larynx. Antero-lateral view. (Cricoid cartilage visible near bottom center.)
Precursor = 4th and 6th
System =
Artery =
Vein =
Nerve =
Lymph =
MeshName = Cricoid+Cartilage
MeshNumber = A02.165.507.211
DorlandsPre =
DorlandsSuf =
The cricoid cartilage, or simply cricoid (from the Greek "krikoeides" meaning "ring-shaped"), is the only complete ring of around the trachea.

It sits just inferior to the in the , and is joined to it medially by the median and postero-laterally by the cricothyroid joints. to it are the rings of cartilage around the trachea (which are not continuous - rather they are C-shaped with a gap posteriorly). The cricoid is joined to the first tracheal ring by the , and this can be felt as a more yielding area between the firm thyroid cartilage and firmer cricoid.

It is also anatomically related to the gland; although the thyroid is inferior to it, the two lobes of the thyroid extend superiorly on each side of the cricoid as far as the thyroid cartilage above it.

The posterior part of the cricoid is slightly broader than the anterior and lateral parts, and is called the lamina, while the part is the band; this may be the reason for the common comparison made between the cricoid and a .

The function of the cricoid is to provide attachments for the various s, cartilages, and s involved in opening and closing the airway and in speech production.

It is made of , and so can become calcified or even ossified, particularly in old age.

When a patient under prior to surgery, the will press on the cricoid cartilage to compress the esophagus behind it so as to prevent from occurring.

Gastric reflux could cause if this is not done considering the general anesthesia can cause relaxation of the allowing stomach contents to ascend through the esophagus into the trachea.