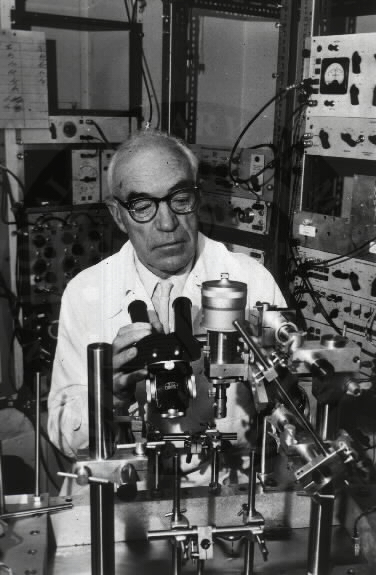 Eccles was born in , Australia. He attended Melbourne High School and graduated from in 1925. He was awarded a to study under at , where he received his in 1929.

In 1966 he moved to the to work at the in . Unhappy with the working conditions there, he left to become a professor at the University at Buffalo from 1968 until he retired in 1975. After retirement, he moved to and wrote on the . He died in 1997 in , Switzerland.

Eccles was a devout and a sometime , and is regarded by many Christians as an exemplar of the successful melding of a life of science with one of faith. A [http://muse.jhu.edu/journals/perspectives_in_biology_and_medicine/v044/44.2karczmar.pdf biography] states that, "although not always a practicing Catholic, Eccles was a theist and a spiritual person, and he believed 'that there is a Divine Providence operating over and above the materialistic happenings of biological evolution'..."

Apart from these seminal experiments, Eccles was key to a number of important developments in . Until around 1949, Eccles believed that was primarily electrical rather than chemical. Although he was wrong in this hypothesis, his arguments led himself and others to perform some of the experiments which proved chemical synaptic transmission. and Eccles worked together on some of the experiments which elucidated the role of as a .