The brothers were born in Brighton, Ohio, now part of Cincinnati, in 1868 and 1870, respectively. They grew up primarily in St. Louis, Missouri, and on their mother's family farm in West Virginia while their father attended medical school.

As teenagers, the brothers studied at the Manual Training School of Washington University in St. Louis, graduating in 1887-1888. There they studied metalwork and woodworking. Their father, a practicing homeopathic physician by this time, was very concerned with the need for sunlight and circulating fresh air; the importance of these elements was to become one of the signatures of the brothers' work.

Charles and Henry each received a "certificate for completion of partial course," a special two-year program at MIT's School of Architecture, in 1891. They studied classical building styles, intending at that time only to gain certification for apprenticeships with architecture and construction firms upon graduation.

After M.I.T. in spring 1890, Charles apprenticed first with the firm of Andrews, Jaques and Rantoul; but after four and a half months, moved to the office of R. Clipston Sturgis. By March 1891, he had moved again to work with Herbert Langford Warren; and by the following November, he had changed again to the firm of Winslow and Wetherell. He would stay there until the two brothers departed to join their parents in Pasadena, California. Henry apprenticed first with the firm of Chamberlin & Austin and then briefly went to work with Shepley, Rutan and Coolidge. All of the firms the brothers worked for were located in Boston, Mass.

In 1893 their parents requested that the sons move to Pasadena, where they had moved to a year before. The brothers agreed and, while traveling by train from Boston, they stopped at the World's Columbian Exposition in Chicago and saw a few examples of Japanese architecture. This experience made a lasting impression on both of them, according to a late-in-life interview with Henry. There was actually very little Japanese influence upon their work until after Charles visited the 1904 Louisiana Purchase Exposition in St. Louis. 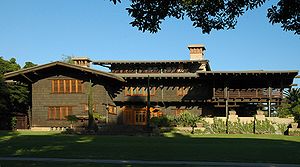 The Gamble House, Pasadena, California, in 2005

The Architectural firm of Greene and Greene was established in Pasadena in January 1894, eventually building toward the crescendo of their "ultimate bungalows", such as the 1908 Gamble House in Pasadena, generally considered one of the finest examples of residential architecture in the United States.

In 1901 Charles Greene married Alice Gordon White, and they honeymooned in Europe and her native England. It was following this trip that the firm began developing the distinctive stylistic elements that finally came together as a cohesive whole in their grand works of 1907-09. The Greenes developed a personal idiom within the Arts and crafts aesthetic, receiving commissions to design furnishings for their houses. Charles' sketches for the 1903 Mary Darling house were published in England in Academy Architecture the same year, representing the first foreign publication of the firm's work.

In 1905 the Greenes began an association with Peter Hall as the primary contractor for their major commissions, and from 1907 with his brother John Hall, who ran a millwork shop producing their decorative arts and furniture designs.

The firm of Greene & Greene was officially dissolved in 1922 after Charles moved his family north to Carmel, California. Henry remained in Pasadena, doing architecture projects on his own. The brothers remained lifelong friends until their deaths in the 1950s.

The structure of the Greene & Greene house is essential not only to the immense feeling of security that such an overly-supported structure brings, but also accentuates the importance of the Arts & Crafts fundamentals in the Greene & Greene style. The visual importance of the aesthetic nature of the joints, pegs, and complex wood-work symbolizes the structure of the house, and coincides with the principles taught in the Manual Training School of their youth. The structure of the house is externalized, or exploded, rather than hidden in decoration. Each element of the structure asserts itself. This extravagance of support takes its origins from the elaborate joinery and framing of traditional Japanese architecture. 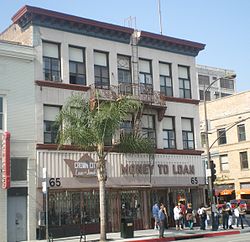 The Greenes took on few commercial projects. Their attention to detail would not have been possible in a larger firm, or one that focused on commercial buildings as well as residential. The Greenes repeatedly turned down offers to construct buildings in downtown Los Angeles. The Greene brothers were masters in their area of domestic concentration for which, until the year of 1948, they received little acclaim. In 1948 they received citations from the Pasadena Chapter of the American Institute of Architects and from the national body in 1952 for creating a “new and native architecture.” In 1960, they were among the pioneer modern architects included in the book Five California Architects by Esther McCoy, where the chapter on the Greenes was written by Randall Makinson.

The Greene & Greene style's influence on California’s architectural history is undeniable. Their style wedded practical comfort and fine art into a refined, crafted masterpiece in which every detail contributed to the overall subtlety of the work, essentially a masterpiece of design.