Proposition 4, or the Abortion Waiting Period and Parental Notification Initiative, also known to its supporters as Sarah's Law, was an initiative state constitutional amendment on the 2008 California General Election ballot [1][2][3]

The initiative would prohibit abortion for unemancipated minors until 48 hours after physician notifies minor’s parent, legal guardian or, if parental abuse has been reported, an alternative adult family member.

Proposition 4 was rejected by voters on November 4 of that year.

The proposed initiative, if enacted as a constitutional amendment, would:

Arguments in favor of Prop. 4

Notable arguments that have been made in favor of Prop. 4 include:

Path to ballot and prior attempts at passage

The signature-gathering drive to qualify the 2008 Parental Notification petition for the ballot was conducted by petition management firm Bader & Associates, Inc. at a cost of $2,555,000.[12]

When Prop 73 lost in 2005, some supporters thought that a similar measure would fare better in a general election. However, Prop 85 did worse. Unlike 85 or 73, Proposition 4 allows an adult relative of the minor seeking an abortion to be notified, if the minor's parents are abusive.

Camille Giulio, a spokeswoman for the pro-4 campaign said that the November 2008 election represents a better opportunity for parental notification legislation because:

The Campaign for Teen Safety is the official ballot committee against the proposition.

Notable arguments that have been made against Prop. 4 include:

The No on 4 campaign has hired the Dewey Square Group[19] as a consultant.[20]

As of September 27, some of the top donors to the opposition campaign were:

Planned Parenthood Affiliates of California and others filed a lawsuit with the Sacramento County Superior Court in early August to strike out all references to "Sarah" and "Sarah's Law" and "other misleading language in the voter's guide" for Proposition 4. The title "Sarah's Law" refers to the case of 15-year-old "Sarah" who died as a result of an abortion in 1994. Proposition 4's ballot language in the official voter's guide suggests that "Sarah" might have been saved had her parents known about her abortion. Opponents of Proposition 4 argue that "Sarah" was not considered a minor in Texas, where the abortion was performed, and that she already had a child with a man who claimed to be her commonlaw husband. If this is the case, the proposed law, Proposition 4, would not have helped her, since it wouldn't have applied to her. Based on this reasoning, opponents asked that the references to Sarah be stricken.[23]

Judge Michael Kenny of the Sacramento Superior Court ultimately ruled against the opponents, allowing the original proposed ballot language and arguments, including references to Sarah, to stay in the official California voter's pamphlet.

The Field Poll has conducted and released the results of four public opinion polls on Proposition 4, in July, August, September, and October.[24][25][26][27]

Mark DiCamillo, director of the polling agency, said he believes the current version is running stronger because Latinos overwhelmingly favor it and are expected to vote in higher-than-usual numbers in November.[28] 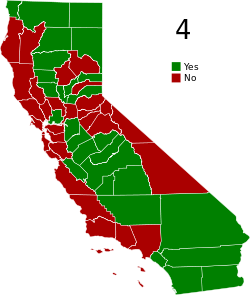