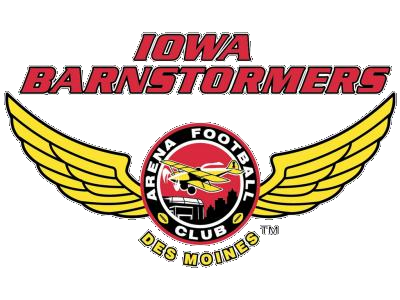 
The Iowa Barnstormers are an team based in . They are currently playing their second season in the Arenafootball2 league after competing for six season in the . The franchise was granted when the former team of the same name moved to as the for the 2001 season. In 2001, the team's first season of playing in Arenafootball2, the Barnstormers played in the Veterans Memorial Auditorium (a/k/a "The Barn). They finished 9-7 overall, missing the playoffs and suspending operations the very next year until 2008.

On April 25, 1994, the approved an expansion team to be based in , starting with the 1995 season. The competed as an AFL team from 1995 to 2000, successfully reaching the in 1996 and 1997, as well as developing NFL superstar . The need for a more modern venue as well as the league's desire for a larger market led to the move to despite two failed past attempts in the city, the (1988) and the New York CityHawks (1997-1998), both of which played at in . The team was purchased by , who is also the Islanders' majority owner and re-named the .

The Arena Football organization did award an franchise to Iowa for the 2001 season also called the Barnstormers, but that team suspended operations after the season. The original Barnstormers were noted for their unique uniforms, which in keeping with the aviation theme included the depiction of goggles on the helmets, wings on the shoulders of the jerseys, and propellers on the pants legs. The primary figures in the original Iowa organization were , the inventor of and , the quarterback who went on to play for the and win both the and MVP.

Aside from the league's desire to re-enter the New York market, another major reason cited for the team's relocation was the inadequacy of their Des Moines venue, the Iowa Veterans Memorial Auditorium, also known as "The Barn". Most of the seats in this venue were located directly along the sidelines as is typical of sports venues. The Barnstormers organization constantly lobbied for the construction of a better facility during their time in Des Moines, to no avail.

In 2005, the Wells Fargo Arena opened in Des Moines, directly across from what the locals call "Vets", as part of the newly expanded . A new Barnstormers af2 franchise began play there for the 2008 season.

On , , the announced that they had approved the inactive franchise's new ownership, meaning that the Barnstormers resumed play in at the . They hold practices at the historic , and they inherited the tradition of the original Barnstormers. The team adopted the original unique uniforms, which in keeping with the aviation theme included the depiction of goggles on the helmets, wings on the shoulders of the jerseys, and propellers on the pants legs. The mascot, a dog named Ace, is featured in this helmet, along with the uniform jersey and pants. [cite news|first=Tom|last=Witosky|title=Barnstormers revived as af2 team|url=http://docs.newsbank.com/openurl?ctx_ver=z39.88-2004&rft_id=info:sid/iw.newsbank.com:AWNB:DMRB&rft_val_format=info:ofi/fmt:kev:mtx:ctx&rft_dat=11BCECC6EF53C8A0&svc_dat=InfoWeb:aggregated5&req_dat=0D0CB57AB53DF815|work=The Des Moines Register|date=2007-09-20]

with the proceeds going to the 1993 Iowa Flood Victims.

The summer of 1993 resulted in the worst flooding on record in the Midwest. In July, two rivers in Des Moines broke over their banks and cut off the water supply for over 250,000 capital city residents. By August, some parts of eight other states had been declared disaster areas, but every county in Iowa was included in that proclamation

against the number one overall seed American Conference Champion Iowa Barnstormers. Both teams ended their regular seasons at 12-2, yet Iowa had a better conference record (7-2 to 6-2). For the Storm, they were hoping to get their fourth championship title in six overall appearances, while the Barnstormers (in only their second season) were trying to win their very first league championship game.

With the win, the Storm claimed its fourth title in six seasons. An then AFL-record audience of over one million watched the game live on ESPN.

three before. Now, they were trying to acquire their second league title.

In the first quarter, the Rattlers slithered first with kicker getting a 19-yard Field Goal, yet the Barnstormers responded with QB completing a 30-yard TD pass to OS . In the second quarter, Arizona lead off the period with FB/LB Robert 'Bob' McMillen getting a 1-yard TD run, whle Iowa kicker Mike Black nailed a 25-yard field goal. The Rattlers would begin to take command with QB (who was filling in for an injured Sherdrick Bonner) completing a 4-yard TD pass to / Hernandez 'Hunkie' Cooper, while the Barnstormers' only response was Black kicking a 20-yard field goal. Immediately afterwards, the Rattlers continued striking as would return the kickoff 56 yards for a touchdown to end the half. In the third quarter, Arizona continued its domination as Davis got a 1-yard QB Sneak run for a touchdown, while Hunkie Cooper returned an interception 30 yards for a touchdown. Iowa's only response from the period was Warner completing another 30-yard TD pass to . Afterwards, the Rattlers wrapped up ther period with Davis completing a 49-yard TD pass to WR/LB 'Shakes' . In the fourth quarter, the Barnstormers tried to fight back with WR/DB getting a 1-yard TD run, yet Arizona wrapped the game up with Davis and Schexnayder hooking up with each other again on a 28-yard TD pass, while Brenner would put on the finishing touches with a 44-yard field goal. All that was left of Iowa's attack was Warner completing a 9-yard TD pass to WR/LB .

With the win, the Rattlers got their second title in franchise history.

Jim Foster is the founder and first commissioner of the . He is also a former NFL and USFL executive and was later the principal owner of the Iowa Barnstormers from 1995-2001.

Foster derived the basic concept of while watching a game of indoor soccer being played at Madison Square Garden on February 11, 1981. He drew it out on a manila envelope. The began league play in 1987. In 1990, Foster was granted a patent on the game of Arena and the equipment unique to it, particularly the end zone rebound nets, meaning that other indoor football leagues not affiliated with the organization must play by at least somewhat different rules than the ones the uses.

Jim is a fan of traditional jazz and plays trumpet whenever he gets the chance. He was born and raised in Davenport, Iowa - the same hometown as legendary jazz cornetist .

When Jim lived in during his Barnstormer ownership days, he served as a member of the board of directors for Jazz Partnerz (Kurt Bowermaster, president), the non-profit group that planned and organized the Greater .

Born in , Jon Roehlk played his final season for the Barnstormers before retiring from following the 1995 season. Roehlk entered the league as a rookie for the in 1987 and was traded to the the following season. He helped lead Detroit to four Championships (1988, 1989, 1990, 1992) and was an six-time All-Arena selection.

Roehlk played three games with the in 1987, as a replacement player during the lockout season.

appearances in both seasons. He was also named on a 20 player list of the best arena football players of all time. Some consider Warner as the greatest Arena Football player ever.

In 1997, Warner was offered an NFL tryout by the , but an injury to his throwing elbow caused by a venomous spider bite received during his honeymoon prevented him from attending.Fact|date=March 2008

Warner was the backup quarterback for the during the 1998 regular season and the 1999 preseason. When starting quarterback was injured in a preseason game, Warner took over as the starter. With the support of running back and wide receivers , , , and , Warner completed one of the top seasons by a quarterback in NFL history by throwing for 4,353 yards with 41 touchdown passes and a completion rate of 65.1%. The Rams' high-powered offense was nicknamed "" and registered the first in a string of three consecutive 500-point seasons, an NFL record. Warner threw three touchdown passes in each of the first three games in the 1999 season, his first three NFL starts. He is the only NFL quarterback in history to accomplish that feat, and only the second other than to do it in his first two NFL starts.

Warner really drew attention, however, in the season's next game, a home game against the , who had been NFC West Division champs for 12 of the previous 13 seasons. The Rams had lost 17 of their previous 18 meetings with the 49ers and had a 3-0 record along with the 49ers' 2-1 record. Warner proceeded to throw three touchdown passes on the Rams' first three possessions of the game and four in the first half to propel the Rams to a 28-10 halftime lead on the way to a 42-20 victory. Warner finished the game with five touchdown passes, giving him 14 in four games and, more importantly, the Rams a 4-0 record. After many years of defeats and losing records, football experts finally had to take notice.

In the NFL playoffs, Warner led the Rams to a victory against the . He threw for two touchdowns and a Super Bowl record 414 passing yards, including a 73-yard touchdown to when the game was tied with just over two minutes to play. Warner also set a Super Bowl record by attempting 45 passes without a single interception.

Warner played for the until July, 1 2004, when he was released and picked up by the . The Giants would then trade him to his current team the in 2005.

With the loss of to the NFL and after an 0-5 start, the Barnstormers traded WR/LB and OL/DL on June 1, 1998, to the for quarterback , who would go on to break most of Warner¹s passing records while playing for the Barnstormers and the .

The Iowa Barnstormers are known for their tailgate experience. It is considered one of the best environments to tailgate in all of Arena Football. The tailgate party begins hours before kick-off, featuring live music and entertainment; similar to college football tailgates through the county.

The Iowa Barnstormers famous cheer squad is know as the Storm Chasers. Each game the Storm Chasers appear led by the team's mascot Billy, a barnstormer who rides Barn Force One, and Ace the dog. All make up the historic fan club known as the Flight Crew.

When the Barnstomers square off on the field with the the two teams play for a trophy known as the Pilot Wheel and Prop Trophy. The trophy includs a stearing wheel form a steamboat and a propeller from a crop duster plan. Quad City has won the trophy three times, while the barnstormers have won it twice.

On July 12, 2008, the Barnstormers held their first ever blackout night, asking all fans to wear black shirts. Iowa defeated the Quad City Steamwheelers 76-53 in front of a packed house. The Barnstormers plan to use blackout nights to promote big games against big rivals.

The Barnstormers have averaged 10,418 per game in home paid attendance throughout the team's history.

Voices of the Barnstormers