Climatology (from Greek κλίμα, klima, "place, zone"; and -λογία, -logia) is the study of climate, scientifically defined as weather conditions averaged over a period of time,[1] and is a branch of the atmospheric sciences. Basic knowledge of climate can be used within shorter term weather forecasting using analog techniques such as the El Niño – Southern Oscillation (ENSO), the Madden-Julian Oscillation (MJO), the North Atlantic Oscillation (NAO), the Northern Annualar Mode (NAM), the Arctic oscillation (AO), the Northern Pacific (NP) Index, the Pacific Decadal Oscillation (PDO), and the Interdecadal Pacific Oscillation (IPO). Climate models are used for a variety of purposes from study of the dynamics of the weather and climate system to projections of future climate.

The earliest person to hypothesize climate change may have been the medieval Chinese scientist Shen Kuo (1031–1095). Shen Kuo theorized that climates naturally shifted over an enormous span of time, after observing petrified bamboos found underground near Yanzhou (modern day Yan'an, Shaanxi province), a dry-climate area unsuitable for the growth of bamboo.

Early climate researchers include Edmund Halley, who published a map of the trade winds in 1686 after a voyage to the southern hemisphere. Benjamin Franklin (1706-1790) first mapped the course of the Gulf Stream for use in sending mail from the United States to Europe. Francis Galton (1822-1911) invented the term anticyclone.[2] Helmut Landsberg (1906-1985) fostered the use of statistical analysis in climatology, which led to its evolution into a physical science. 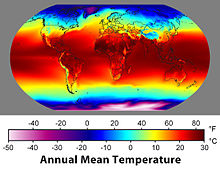 Map of the average temperature over 30 years. Data sets formed from the long-term average of historical weather parameters are sometimes called a "climatology".

Climatology is approached in a variety of ways. Paleoclimatology seeks to reconstruct past climates by examining records such as ice cores and tree rings (dendroclimatology). Paleotempestology uses these same records to help determine hurricane frequency over millennia. The study of contemporary climates incorporates meteorological data accumulated over many years, such as records of rainfall, temperature and atmospheric composition. Knowledge of the atmosphere and its dynamics is also embodied in models, either statistical or mathematical, which help by integrating different observations and testing how they fit together. Modeling is used for understanding past, present and potential future climates. Historical climatology is the study of climate as related to human history and thus focuses only on the last few thousand years.

Climate research is made difficult by the large scale, long time periods, and complex processes which govern climate. Climate is governed by physical laws which can be expressed as differential equations. These equations are coupled and nonlinear, so that approximate solutions are obtained by using numerical methods to create global climate models. Climate is sometimes modeled as a stochastic process but this is generally accepted as an approximation to processes that are otherwise too complicated to analyze.

Scientists use climate indices based on several climate patterns (known as modes of variability) in their attempt to characterize and understand the various climate mechanisms that culminate in our daily weather. Much in the way the Dow Jones Industrial Average, which is based on the stock prices of 30 companies, is used to represent the fluctuations in the stock market as a whole, climate indices are used to represent the essential elements of climate. Climate indices are generally devised with the twin objectives of simplicity and completeness, and each index typically represents the status and timing of the climate factor it represents. By their very nature, indices are simple, and combine many details into a generalized, overall description of the atmosphere or ocean which can be used to characterize the factors which impact the global climate system.

El Niño-Southern Oscillation (ENSO) is a global coupled ocean-atmosphere phenomenon. The Pacific ocean signatures, El Niño and La Niña are important temperature fluctuations in surface waters of the tropical Eastern Pacific Ocean. The name El Niño, from the Spanish for "the little boy", refers to the Christ child, because the phenomenon is usually noticed around Christmas time in the Pacific Ocean off the west coast of South America.[3] La Niña means "the little girl".[4] Their effect on climate in the subtropics and the tropics are profound. The atmospheric signature, the Southern Oscillation (SO) reflects the monthly or seasonal fluctuations in the air pressure difference between Tahiti and Darwin. The most recent occurrence of El Niño started in September 2006[5] and lasted until early 2007.[6]

ENSO is a set of interacting parts of a single global system of coupled ocean-atmosphere climate fluctuations that come about as a consequence of oceanic and atmospheric circulation. ENSO is the most prominent known source of inter-annual variability in weather and climate around the world. The cycle occurs every two to seven years, with El Niño lasting nine months to two years within the longer term cycle,[7] though not all areas globally are affected. ENSO has signatures in the Pacific, Atlantic and Indian Oceans.

In the Pacific, during major warm events, El Niño warming extends over much of the tropical Pacific and becomes clearly linked to the SO intensity. While ENSO events are basically in phase between the Pacific and Indian Oceans, ENSO events in the Atlantic Ocean lag behind those in the Pacific by 12–18 months. Many of the countries most affected by ENSO events are developing countries within tropical sections of continents with economies that are largely dependent upon their agricultural and fishery sectors as a major source of food supply, employment, and foreign exchange.[8] New capabilities to predict the onset of ENSO events in the three oceans can have global socio-economic impacts. While ENSO is a global and natural part of the Earth's climate, whether its intensity or frequency may change as a result of global warming is an important concern. Low-frequency variability has been evidenced: the quasi-decadal oscillation (QDO). Inter-decadal (ID) modulation of ENSO (from PDO or IPO) might exist. This could explain the so-called protracted ENSO of the early 1990s.

Note how the MJO moves eastward with time.

The Madden–Julian Oscillation (MJO) is an equatorial traveling pattern of anomalous rainfall that is planetary in scale. It is characterized by an eastward progression of large regions of both enhanced and suppressed tropical rainfall, observed mainly over the Indian and Pacific Oceans. The anomalous rainfall is usually first evident over the western Indian Ocean, and remains evident as it propagates over the very warm ocean waters of the western and central tropical Pacific. This pattern of tropical rainfall then generally becomes very nondescript as it moves over the cooler ocean waters of the eastern Pacific but reappears over the tropical Atlantic and Indian Oceans. The wet phase of enhanced convection and precipitation is followed by a dry phase where convection is suppressed. Each cycle lasts approximately 30–60 days. The MJO is also known as the 30–60 day oscillation, 30–60 day wave, or intraseasonal oscillation.

Indices of the NAO are based on the difference of normalized sea level pressure (SLP) between Ponta Delgada, Azores and Stykkisholmur/Reykjavik, Iceland. The SLP anomalies at each station were normalized by division of each seasonal mean pressure by the long-term mean (1865–1984) standard deviation. Normalization is done to avoid the series of being dominated by the greater variability of the northern of the two stations. Positive values of the index indicate stronger-than-average westerlies over the middle latitudes.[9]

The NAM, or AO, is defined as the first EOF of northern hemisphere winter SLP data from the tropics and subtropics. It explains 23% of the average winter (December–March) variance, and it is dominated by the NAO structure in the Atlantic. Although there are some subtle differences from the regional pattern over the Atlantic and Arctic, the main difference is larger amplitude anomalies over the North Pacific of the same sign as those over the Atlantic. This feature gives the NAM a more annular (or zonally symmetric) structure.[9]

The PDO is a pattern of Pacific climate variability that shifts phases on at least inter-decadal time scale, usually about 20 to 30 years. The PDO is detected as warm or cool surface waters in the Pacific Ocean, north of 20° N. During a "warm", or "positive", phase, the west Pacific becomes cool and part of the eastern ocean warms; during a "cool" or "negative" phase, the opposite pattern occurs. The mechanism by which the pattern lasts over several years has not been identified; one suggestion is that a thin layer of warm water during summer may shield deeper cold waters. A PDO signal has been reconstructed to 1661 through tree-ring chronologies in the Baja California area.

The Interdecadal Pacific Oscillation (IPO or ID) display similar sea surface temperature (SST) and sea level pressure patterns to the PDO, with a cycle of 15–30 years, but affects both the north and south Pacific. In the tropical Pacific, maximum SST anomalies are found away from the equator. This is quite different from the quasi-decadal oscillation (QDO) with a period of 8–12 years and maximum SST anomalies straddling the equator, thus resembling ENSO.

Climate models use quantitative methods to simulate the interactions of the atmosphere, oceans, land surface, and ice. They are used for a variety of purposes from study of the dynamics of the weather and climate system to projections of future climate. All climate models balance, or very nearly balance, incoming energy as short wave (including visible) electromagnetic radiation to the earth with outgoing energy as long wave (infrared) electromagnetic radiation from the earth. Any unbalance results in a change in the average temperature of the earth.

The most talked-about models of recent years have been those relating temperature to emissions of carbon dioxide (see greenhouse gas). These models predict an upward trend in the surface temperature record, as well as a more rapid increase in temperature at higher latitudes.

Models can range from relatively simple to quite complex:

In contrast to meteorology, which focuses on short term weather systems lasting up to a few weeks, climatology studies the frequency and trends of those systems. It studies the periodicity of weather events over years to millennia, as well as changes in long-term average weather patterns, in relation to atmospheric conditions. Climatologists, those who practice climatology, study both the nature of climates – local, regional or global – and the natural or human-induced factors that cause climates to change. Climatology considers the past and can help predict future climate change.

Phenomena of climatological interest include the atmospheric boundary layer, circulation patterns, heat transfer (radiative, convective and latent), interactions between the atmosphere and the oceans and land surface (particularly vegetation, land use and topography), and the chemical and physical composition of the atmosphere.

Use in weather forecasting

A more complicated way of making a forecast, the analog technique requires remembering a previous weather event which is expected to be mimicked by an upcoming event. What makes it a difficult technique to use is that there is rarely a perfect analog for an event in the future.[10] Some call this type of forecasting pattern recognition, which remains a useful method of observing rainfall over data voids such as oceans with knowledge of how satellite imagery relates to precipitation rates over land,[11] as well as the forecasting of precipitation amounts and distribution in the future. A variation on this theme is used in Medium Range forecasting, which is known as teleconnections, when you use systems in other locations to help pin down the location of another system within the surrounding regime.[12] One method of using teleconnections are by using climate indices such as ENSO-related phenomena.[13]