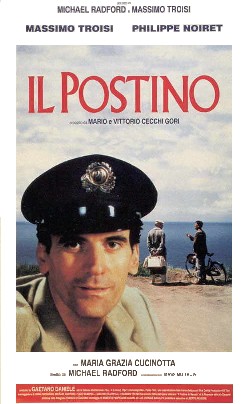 "Il Postino" is a film directed by . The film was originally released in the U.S. as "The Postman", a straight translation of the Italian title. [The official database refers to it as "The Postman (Il Postino)" [http://www.oscars.org/awardsdatabase/] , and a poster with the title "The Postman" is reproduced in its IMDb profile. [http://www.imdb.com/title/tt0110877/posters] ] However, since the release of 's film of the same name, the film has been released on DVD as "Il Postino: The Postman", and English-language film critics often refer to the film by its Italian title alone.

The film tells a fictional story in which the real life an poet forms a relationship with a simple who learns to love . It stars , and . The screenplay was adapted by , , , and Massimo Troisi from the novel "" by . Skármeta himself had previously adapted his novel for the screen in as "".

Writer/star Massimo Troisi postponed heart surgery so that he could complete the film. The day after filming was completed, he suffered a fatal heart attack.

Whereas the novel and the 1983 film were set in Chile, with Neruda living in his home at around 1970, "Il Postino" moves the setting to Italy in about 1950. The film is set and was partially filmed on the island of Salina, of the volcanic Aeolian Island chain off the north coast of Sicily. One unfortunate victim of the film's popularity has been Pollara Beach on the island, which has suffered erosion from motorboats and vandalism from tourists since the film was produced [Tourists threaten Il Postino beach [http://www.guardian.co.uk/environment/2007/may/10/travelsenvironmentalimpact.film] ] .

Mario Ruoppolo is a young man in an insular Italian fishing village where time moves slowly. Since Mario's seasickness doesn't allow him to fish, he is given the job of postman, delivering mail on a bicycle to only a single customer, the famous Chilean poet . After a while, the two become good friends. Neruda has been exiled to because of his views. In the meantime, Mario meets a beautiful young lady, Beatrice Russo, in the village's only cafe. With the help of Neruda, Mario is able to better communicate his love to her through the use of . The two are later married. The poet Neruda and his wife are allowed to return to Chile. Some months after, Mario makes a recording of village sounds for Neruda. Years after, Neruda comes back to the island as a tourist and finds Beatrice and her son in the same old cafe. Through her, he discovers that Mario had been killed a while back. He was going to read his poetry at a large political gathering in but was killed by police intervention. Beatrice gives Neruda the recordings of village sounds, which also record the sounds of leading to Mario's death.