Mast with worker at base

The North Hessary Tor is a hill 517 metres high just above Dartmoor Prison, in Princetown within Dartmoor Forest civil parish, which is located in the borough of West Devon, Devon, England (grid reference SX578742). The tor is one of the boundary points mentioned in the perambulations of the Forest of Dartmoor.[1]

Situated on the summit is an FM radio and television transmitter which uses as aerial a 196.0 metre (643 ft) high guyed mast. It was built by the BBC in 1955 when a transmitter was needed to introduce 405 line television into Devon. It now carries a small UHF TV transmitter which serves Princetown and Dartmoor. FM radio transmissions began in 1956 and cover most of Devon and eastern parts of Cornwall. It is owned and operated by Arqiva.

Analogue television was switched off at this mast between 12 August 2009, when BBC Two was switched off, and 9 September 2009 when the remaining three were switched off. They were replaced by three digital public service multiplexes. 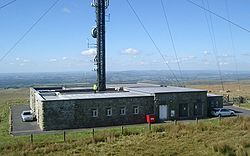 Mast and base station