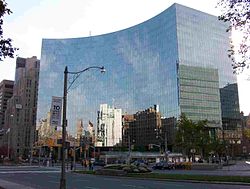 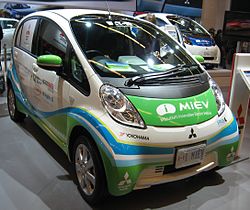 A Mitsubishi i MiEV from the 2011 Montreal International Auto Show showing the hydro companies of Canada for Ontario Power Generation, Hydro-Québec, BC Hydro & others.

Ontario Power Generation (OPG) is a public company wholly owned by the Government of Ontario.[2] OPG is responsible for approximately 70% of the electricity generation in the Province of Ontario, Canada.[3] Sources of electricity include nuclear, hydroelectric, solar, wind, and fossil fuel. Although Ontario has an open electricity market, the provincial government, as OPG's sole shareholder, regulated the price the company receives for its electricity to be less than the market average, in an attempt to stabilize prices. As of April 1, 2008 the company's rates has been regulated by the Ontario Energy Board.

OPG was established in April 1999 under the Ontario Progressive Conservative government of former premier Mike Harris as a precursor to deregulation of the province's electricity market. As part of government plans to privatize the assets of Ontario Hydro, the utility was split into five separate corporations. OPG was created as the owner and operator of all of Ontario Hydro's electricity generating stations.

The 190-member Ontario Energy Association (OEA) announced Jim Hankinson, then President and CEO of Ontario Power Generation (OPG), as the recipient of the 2007 OEA Leader of the Year award. "Our two award recipients were judged to be the best of the best for 2007, specifically in the key categories of corporate leadership, customer focus, an ongoing commitment to innovation and continuous improvement, and pursuing the highest standards in operational performance said Brian Tobin, Co-Chair of the OEA's Annual Awards Selection Committee.[6]

The financial situation at Ontario Power Generation has improved significantly since 2003. Its profits for 2005 were $366 million, and its credit rating was upgraded. In July 2006, Liberal Energy Minister Dwight Duncan described OPG's turnaround as "[o]ne of the untold stories of the last two years"[7]

On the local public relations side, OPG has won many awards for its performance as a "good corporate citizen" [8]. Most recently, OPG was named "Business of the Year" by the Kincardine and District Chamber of Commerce. OPG regularly sponsors community events and houses wildlife trails in the exclusion zones around its reactors. The company's annual employee charity campaign has raised millions of dollars for charities across Ontario. In October 2008, OPG was named one of "Canada's Top 100 Employers" by Mediacorp Canada Inc., and was featured in Maclean's newsmagazine. Later that month, OPG was also named one of Greater Toronto's Top Employers, which was announced by the Toronto Star newspaper.[9]

OPG regularly reports on its operational, safety and environmental record. The company publishes semi-annual Performance Reports summarizing its performance in these areas.

The Darlington Nuclear Generating Station, on the shores of Lake Ontario in Clarington.

OPG is Canada's largest owner of nuclear power plants with responsibility for operating the Pickering A, Pickering B, and Darlington nuclear generating stations in Ontario. OPG also owns the Bruce A and Bruce B nuclear stations. Since May 2001, the Bruce A and Bruce B stations have been on a long term lease to Bruce Power which operates, maintains and is refurbishing the Bruce A units. The lease is set to expire in 2018 but can be extended for an additional 25 years.

OPG is proposing to construct and operate a deep geologic repository on the Bruce Nuclear site, adjacent to its present Western Waste Management Facility. The repository would provide permanent storage of low- and intermediate-level radioactive waste produced from the operation of the Bruce, Pickering, and Darlington nuclear generating stations. In 2005, OPG initiated the regulatory approval process. The first steps are a comprehensive environmental assessment by the Canadian Environmental Assessment Agency (CEAA),[10] and an application for a site preparation and construction licence from the Canadian Nuclear Safety Commission. .

OPG has also begun the process for building up to four new nuclear units at the site of its Darlington Nuclear Station. There is a lengthy approvals process in place, including a full Environmental Assessment which will take 3–4 years to complete. If everything goes well, the new units would go into service starting in 2018. No decision has yet been made on what technology the new reactors will use.

After conducting studies to determine the feasibility of refurbishing the 4 reactors at the Pickering B nuclear generating station. In February 2010 an announcement was made that they would be kept in good repair until 2020 but would not undergo a full refurbishment as it would not be economical. The 4 reactors at Pickering B represent over 2,000 megawatts of generating capacity. The two operating reactors at Pickering A will also close in 2020. The four reactors at Darlington will be refurbished as their performance and size makes this economically desirable.[11]

OPG owns and operates or contracts some limited alternative electricity generation through two wind power sites as well as two solar power sites. The company is currently exploring the use of biomass as a carbon neutral energy source that could replace some or all of the coal being burned at some of Ontario's coal-fired generating stations. However, OPG's development of green power sources has been limited as the government does not want OPG to compete against private companies in the anticipated lucrative environmentally friendly power market and has stopped OPG from making any proposals in this area[12].

OPG has attracted considerable controversy for the continued operation of some of its coal fired generating stations, which rank among Canada's largest individual air pollution sources.[citation needed] Because Nanticoke houses a massive 3,900 MW of generation capacity in one site, it produces "the most pollution in one site" despite being a reasonably clean plant per megawatt of power [13]. Nanticoke Generating Station is North America's largest coal fired generating station and the single largest air pollution source for southern Ontario and northern New York state, attracting considerable criticism from environmentalists and legislators in both jurisdictions.

OPG's Lambton Generating Station is the second largest air polluter in the province.

The company endured significant criticism concerning the slow return to operation of some of its nuclear generating stations which had been shut down by the 2003 North America blackout. The problem was that all but one of the reactors were tripped and allowed to poison out, preventing an early reconnection to the electricity grid. Once shut down, all nuclear reactors take several days to return to service.

Another source of criticism was the extended and expensive refit to the reactor Unit 4 at the Pickering A Nuclear Station. In late 2003, the incoming Liberal government fired the three most senior executives at OPG on the heels of a report that the retrofit of a single reactor at the Pickering nuclear plant had come in $900 million over budget and three years behind schedule. The government also accepted the resignation of all remaining Board members. Management underestimated the amount of work and complexity of the Unit 4 refurbishment project and failed to do a complete scope analysis before starting on the project.[citation needed] Due to the uproar over the large cost overruns and delays, an independent review committee was commissioned to examine the future role of OPG in the electricity sector; the future structure of OPG; the appropriate corporate governance and senior management structure; and the potential refurbishing of Pickering A Units 1, 2, and 3. Former federal Finance Minister and Deputy Prime Minister John Manley chaired the review committee. Peter Godsoe, Chairman of the Bank of Nova Scotia, and Jake Epp, a former federal Cabinet Minister, Chair of the Pickering A Review Panel, and interim Chairman of OPG, also sat on the committee.[14]

The experience of refurbishing Pickering A Unit 1 was significantly different with a much tighter adherence to schedule and budget. Unit 1 was returned to service in November 2005 providing 542 MW of generating capacity for Ontario's electricity system. It was decided that Pickering Units 2 and 3, which had considerably larger maintenance issues, would not be restarted as the business case could not be made. 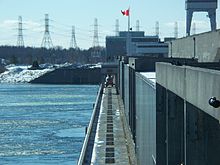 Altogether there are 29 plants producing 127 MW of power.