Dictionary of Greek and Roman Biography and Mythology

Dictionary of Greek and Roman Biography and Mythology 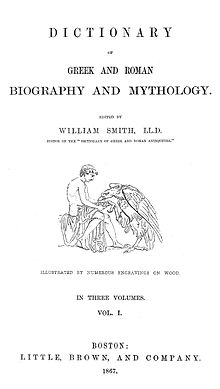 The Dictionary of Greek and Roman Biography and Mythology (1849, originally published 1844 under a slightly different title) is an encyclopedia/biographical dictionary.

The work lists thirty-five authors in addition to the editor, who is also an author for some definitions and articles. The authors were classical scholars, primarily from Oxford, Cambridge, the Rugby School, and the University of Bonn, but some were from other institutions. Many of the mythological entries were the work of the German expatriate Leonhard Schmitz, who helped to popularise German classical scholarship in Britain.[1]

With respect to biographies, Smith intended to be comprehensive. In the preface, he writes:

Many of the Dictionary's definitions and articles have been referred to in more recent works, and Robert Graves has been accused of "lifting his impressive-looking source references straight, and unchecked" from it when writing The Greek Myths.[1]

The work is now in the public domain, and is available in several places on the Internet. While still largely accurate when it states something (only rarely has the ancient text cited changed), much is missing, especially more recent discoveries (like Aristotle's Constitution of the Athenians, or the decipherment of Linear B) and epigraphic material; perhaps more seriously, the context in which ancient evidence is viewed has often changed in the intervening century and a half.

These are the volume divisions for the 1867 publication by Little, Brown, and Company of Boston, Ma., Edited by William Smith LL.D. This publication came in three volumes.:

Also the Internet Archive archive has a derivative work: