The Victor Orthophonic Victrola first demonstrated publicly in 1925, was the first consumer phonograph designed specifically to play "electrically" recorded disks. The combination was recognized instantly as a major step forward in sound reproduction. 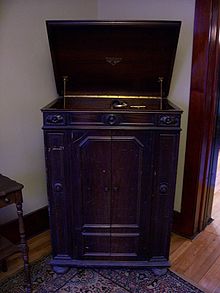 Electrical recording was developed by Western Electric, although a primitive electrical process was developed by Orlando R. Marsh, owner and founder of Autograph Records. Western Electric demonstrated their process to record manufacturers, who were initially unwilling to adopt it because they realized it would make their entire existing catalog obsolete. Under pressure from the new medium of radio, however, Victor and Columbia gave in and began making experimental electrical recordings in 1924.[1]

The design of the Orthophonic was informed by progress in telephony and transmission-line theory. It was developed by two Western Electric researchers, Joseph Maxfield and H. Harrison. Early electrical recordings sounded harsh when played on the acoustic phonographs of the day, which had been designed by trial and error, had highly "colored" frequency response, and emphasized higher frequencies. The researchers invented the exponential horn, and, on realizing that it needed to be nine feet long to reproduce the lowest frequencies on the new discs, designed a method for "folding" the horn into a cabinet of practical size. The design was released by Victor as the "Orthophonic."

Its first public demonstration was front-page news in The New York Times, which reported that

The audience broke into applause... John Philip Sousa [said] "Gentlemen [sic], that is a band. This is the first time I have ever heard music with any soul to it produced by a mechanical talking machine." ... The new instrument is a feat of mathematics and physics. It is not the result of innumerable experiments, but was worked out on paper in advance of being built in the laboratory.... The new machine has a range of from 100 to 5,000 frequencies[sic], or five and a half octaves.... The "phonograph tone" is eliminated by the new recording and reproducing process.[2]

A Wanamaker's ad from October 31, 1925 invited people to come to "Wanamaker's Salon of Music" and "join the throngs" who were "HEARING the new Victor Orthophonic Victrola . . . . imagining performers present . . . . blinking unbelieving eyes" and promising "you will never forget it if you live to be one hundred!"[3]

A historian comments that

playing one of the new records on an Orthophonic was a revelation to listeners accustomed to acoustic reproduction: the dramatic increase in volume, the clear sibilants, and, most of all, the amazing reproduction of bass notes. The Orthophonics set the standard in sound reproduction. Backed by advertising which rightly claimed that their sound was vastly superior to any other machine, they sold very well.[1]

As part of a publicity blitz, Victor designated November 2, 1925 as "Victor Day" and, within days, was "swamped with orders exceeding $20 million."[4]

List prices ranged from $95 (≈$1140 in year-2007 dollars) to $300 depending on cabinetry. $375 "Victrolas with Radiola" incorporated a "five-tube Radiola tuned radio frequency receiver with orthophonic reproduction." A $650 "Victrola-Electrola" incorporated a "two-way valve" allowing both "Orthophonic as well as electrical reproduction," while the $1000 (≈$12,000 in year-2007 dollars) "Orthophonic Victrola—Radiola and Electrola" had it all, including an eight-tube Radiola Super-Heterodyne[sic].[5]

Dance music enthusiasts were not initially impressed, and indeed liked the tonal coloration of existing acoustic disks; it was classical music that "sold" the new device.

The Orthophonic became recognized as a status symbol. Liberace's father, for example, though unemployed, maintained his self-image as an artiste by "own[ing] the best record player available, a 'very special Orthophonic Victrola'"[6]

In the 1950s, the memory of the Orthophonic was fresh enough for RCA Victor to introduce the name "New Orthophonic" for its line of high-fidelity long-playing records.

Note on the term

The term "orthophonic" had previously been used in connection with speech therapy; an 1870 book mentions a therapist who "devised a series of orthophonic exercises to restore the harmony between nervous action and the organs of articulation."[7]