After Nazi Germany attacked the Soviet Union with the initiation of Operation Barbarossa (June 22, 1941 — with most of Greece having fallen under Axis occupation since April and the Battle of Crete having ended on June 1 — the Greek Communist Party (KKE) was the first communist party to call for national resistance (documented in two letters by Nikolaos Zachariadis and Central Committee decisions) in 1940. The duty was heavier from the moment that Hitler invaded the USSR. The KKE together with minor parties of the Left formed a political structure called the National Liberation Front. They were joined by other, center-left or non-politicised Greek resistance militants.

ELAS initiated actions against the German and Italian forces of occupation in Greece on 7 June 1942. Aris Velouchiotis with a small group of 10–15 guerrillas entered the village of Domnista in Evrytania and proclaimed in front of the surprised villagers that they had set off to "start the war against the forces of Axis and their local collaborators". Velouchiotis at first was addressing the traditional "leestes" (mountain living bandits, armed against police and state) like Karalivanos, in order to create a small group of experts in guerilla fighting and survival in the harsh mountain conditions.

On a night in September 1942, a small group of British SOE officers parachuted into Greece near Mt. Giona. This group, led by Brigadier Eddie Myers, had been tasked to blow up one of three bridges (Gorgopotamos, Papadia or Asopos) of the country's main railway line, and to get the two main, but competing, guerrilla groups of ELAS and EDES to cooperate.

After much deliberation, the Gorgopotamos bridge was chosen due to the difficulty of making repairs to the structure. But, for the mission to succeed, it was important to meet the guerrillas. Dimos Karalivanos, an ELAS guerrilla, was the first guerrilla the British found. At the end of October a second group of British officers were parachuted into the Greek mountains. Their leaders were Themis Marinos and Colonel Christopher Woodhouse. Their mission was to locate the guerrillas of EDES and their leader Napoleon Zervas, who were friendlier to the British Headquarters of the Middle-East than ELAS, and co-operate with them. The resulting mission was a challenge for the two guerrilla groups, EDES and ELAS. Finally, they agreed to collaborate. The British did not favour the participation of ELAS, because it was a pro-communist group, but the forces of ELAS were larger and better organised, and without their participation, the mission was likely to fail. So, in a rare and unique event, ELAS and EDES-EOEA joined forces.

On November 14, the 12 British saboteurs, the forces of ELAS (150 men) and those of EDES (60-65 men) met in the village Viniani in Evrytania and the operation started. Ten days later, the forces were at Gorgopotamos. On the night of November 25, at 23:00, the guerrillas started the attack against the Italian garrison. The Italians were startled, and after little resistance, they were defeated. After the defeat of the Italians, the saboteurs set the explosives. ELAS forces also had placed ambushes on the routes towards the bridge, to block the approach of Italian reinforcements. The explosion occurred at 03:00. Afterwards, the guerrillas' forces returned to Viniani, to celebrate the success of the mission.

The destruction of the Gorgopotamos bridge was, along with the Norwegian heavy water sabotage in Rjukan, one of the two biggest guerrilla acts in occupied Europe. The blowing up of the bridge disrupted the German transportation of ammunition via Greece to Rommel's forces for several weeks, taking place at a time where the German forces in North Africa, retreating after the defeat of El Alamein, were in absolute necessity of provisions.

The blowing up of Gorgopotamos bridge favored ELAS. Soon, lots of the inhabitants of the villages of Central Greece became members of ELAS. Furthermore, people sympathised with the ELAS guerrillas because they weren't helped by the British in contrast with EDES. When 25 guerrillas deserted from ELAS, Aris Velouchiotis went to Epirus to threaten Napoleon Zervas not to come in touch with them. Later, the 25 deserters were arrested and executed in the village of Sperhiada. The winter of 1942, ELAS groups were formed in other Greek regions, like Thessaly and Macedonia. In Central Greece, Aris Velouchiotis succeeded to form a powerful semi-conventional army which could attack German and Italian forces. Aris became a legendary figure who imposed an iron discipline in ELAS. At the same time, some members of ELAS (Periklis, Tasos Leuterias, Diamantis, Nikiforos, Thiseas, Dimos Karalivanos, and Belis) have been distinguished during the battles. Aris Velouchiotis formed a group of 30–35 men, called "Mavroskoufides" (the "black caps"), who were his personal guards. During the winter of 1942–1943, new units of ELAS were composed in many regions of Greece. Some areas in the mountains of Central Greece passed from the control of Axis forces to that of ELAS.

The leadership of ELAS followed a triadic form, from its top down to platoon level: the captain (kapetánios), elected by the men and the overall the leader of the unit, the military specialist (stratiotikós), usually a regular Army officer, responsible for tactical planning and training, and the political leader (politikós), usually a KKE member, as EAM's representative. At its top, the General Headquarters of ELAS, these positions were filled by Aris Velouchiotis, Stefanos Sarafis and Andreas Tzimas (nom-de-guerre: Vasilis Samariniotis).

Two events of great importance took place in this period. KKE, after passing great difficulties, succeeded in reorganizing its groups destroyed by Metaxas. Lots of members were recruited and with the help of ELAS, which became the largest partisan army in Greece, EAM became the largest mass political organization in Greek history, claiming over 1.5 million members, enlisted in organizations that covered every neighborhood in every village. The second great event was the foundation of the United Panhellenic Organization of Youth (EPON) (Greek: Ενιαία Πανελλαδική Οργάνωση Νέων). In 1943, a small naval auxiliary navy, the Greek People's Liberation Navy (ELAN) was also founded.

Two years after its foundation, ELAS' military strength had grown from the small group of fighters in Domnitsa to more than 50,000 partizans [2], reaching in total a number of 150,000 men and women in arms and in reserves. EAM by that time counted more than 1,500,000 members,[1][2] being one of the largest resistance groups formed in Europe, similar to the French Maquis, the Italian Resistance and the Yugoslavian Partisans.

In 10 March 1944 the EAM-ELAS, now in control of most of the country, established the Political Committee of National Liberation (PEEA), widely known as the "Mountain Government" (Greek: Κυβέρνηση του βουνού), in effect a third Greek government to rival the collaboration one in Athens and the government-in-exile in Cairo. Its aims, according to its founding Act, were, "to intensify the struggle against the conquerors (...) for full national liberation, for the consolidation of the independence and integrity of our country (...) and for the annihilation of domestic fascism and armed traitor formations."

PEEA was elected in liberated territories and in occupied ones by 2,000,000 Greek citizens. It was historically the first time that women could vote. PEEA ministers covered a wide political spectrum from left to center.

Antagonism with other resistance groups — first phase of the Civil War

ELAS became the strongest of all resistance armed organizations, controlling by 1944 military three-fifths of the country having in its ranks more than 800 military officers of the former National Army. ELAS engaged in battles against other resistance groups, besides the para-military forces of the collaborationist government. EAM began to attack the National Republican Greek League (EDES) on accusations of collaboration with the Germans; the real reason behind the attacks was that, as the outcome of the war was becoming inevitable ELAS wanted to secure total armed dominance in post-war Greece. The armed power of the two formations was not comparable as EDES had approx. 3000 guerrillas and ELAS had the formation and the strength of the pre-war National Greek Army. Small battles were taking place in Epirus where EDES had its main force. This situation led to triangular battles among ELAS, EDES and the Germans. Given the support of the British and the Greek Cairo Government for EDES, these conflicts precipitated a civil war. In October 1943 ELAS launched major attacks against EDES and the guerrilla group of Tsaous Anton in Northern Greece, precipitating a civil war across many parts of Greece which continued until February 1944, when the British agents in Greece negotiated a ceasefire (the Plaka agreement); ELAS broke the agreement by murdering the EKKA resistance group leader, Dimitrios Psarros in as yet unclear and hotly debated circumstances.

ELAS fought against the occupation forces in many battles, which include: 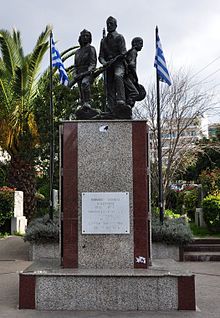 A monument for ELAS, Galatsi, Athens.

This list contains the names of the most well-known ELAS leaders or simple members, with their nom de guerre in parentheses: