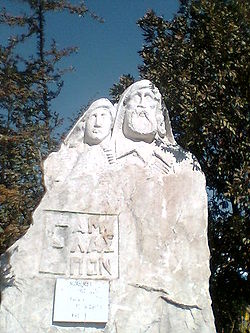 The National Liberation Front (Greek: Εθνικό Απελευθερωτικό Μέτωπο, Ethniko Apeleftherotiko Metopo, EAM) was the main movement of the Greek Resistance during the Axis occupation of Greece during World War II. Its main driving force was the Communist Party of Greece (KKE), but its membership throughout the Occupation period included several other leftist and republican groups. EAM became the first true mass social movement in modern Greek history, and even established its own government, the Political Committee of National Liberation, in the areas it had liberated in spring 1944. At the same time, from late 1943 onwards, the political enmity between EAM and rival resistance groups from the centre and right evolved into a virtual civil war, which was ended only with the Lebanon conference in May 1944. The organization reached its peak after Liberation in late 1944, when it controlled most of the country, before suffering a catastrophic military and political defeat in the December 1944 events. This marked the beginning of its gradual decline and the open persecution of its members (accusing it for crimes against political rivals and Soviet perspective) and leading eventually to the outbreak of the Greek Civil War.

During the Metaxas Regime, the Communist Party of Greece (KKE) was outlawed and its members persecuted. Its hierarchy and organization suffered heavy blows from Metaxas' efficient security forces, and more than 2,000 Communists were imprisoned or sent to internal exile. With the German invasion and occupation of the country in April–May 1941, several hundred members were able to escape and flee to the underground.[1] Their first task was to reform the Party, along with subsidiary groups like the "National Solidarity" (Εθνική Αλληλεγγύη, ΕΑ) welfare organization May 28. After the German attack on the Soviet Union on 22 June and the break of the Molotov–Ribbentrop Pact, the newly reconstituted Communist Party found itself firmly on the anti-Axis camp, a line confirmed by the Party's 6th Plenum during 1–3 July. The Communists were committed to a "Popular Front" tactic, and tried to engage other parties from the left and the centre, including established pre-war politicians. However, these efforts proved largely fruitless. On 16 July however, the "National Workers' Liberation Front" (Εθνικό Εργατικό Απελευθερωτικό Μέτωπο, EEAM) was established, bringing the country's labour union organizations together.[1]

At the KKE's 7th Plenum, the establishment of EAM was decided, despite the refusal of mainstream politicians to participate. EAM was founded in 27 September 1941 by representatives of four left-wing parties: Lefteris Apostolou for the KKE, Christos Chomenidis for the Socialist Party of Greece (SΚΕ), Ilias Tsirimokos for the Union for People's Democracy (ΕLD) and Apostolos Voyiatzis for the Agricultural Party of Greece (ΑΚΕ). EAM's charter called for the "liberation of the Nation from foreign yoke" and the "guaranteeing of the Greek people's sovereign right to determine its form of government". At the same time, while the door was left open to cooperation with other parties, the KKE, due to its large size in relation to its partners, assumed a clearly dominant position within the new movement. Furthermore, the KKE's well-organized structure and its experience with the conditions and necessities of underground struggle were crucial to EAM's success. Georgios Siantos was appointed as the acting leader, since Nikolaos Zachariadis, the KKE's proper leader, was interned in Dachau concentration camp.

Expansion and preparation for armed struggle

On October 10, EAM published its manifesto, and announced itself and its aims to the Greek people. During the autumn of 1941, its influence expanded throughout Greece, either through pre-existing Communist cells or through the spontaneous actions of local "people's committees".[2] A youth movement, the "United Panhellenic Organization of Youth" (EPON) was founded in winter, followed by EAM's military wing, the "National People's Liberation Army" (ELAS) was ordered formed in December 1942. Later, a crude navy, the "National People's Liberation Navy" (ELAN), was established, but its strength and role were severely limited.

The First Civil War and the "Mountain Government"

ELAS fought against German, Italian and Bulgarian occupation forces, as well as, by late 1943, its non-communist led rival organizations, namely the National Republican Greek League (EDES) and the National and Social Liberation (EKKA), succeeding in destroying the latter entirely in April 1944. EAM/ELAS activity resulted in the complete liberation of a large area of the mountainous Greek mainland from Axis control, where in March 1944 EAM established a separate government, the "Political Committee of National Liberation" (PEEA). EAM even carried out elections to the PEEA's parliament, the "National Council", in April, where for the first time in Greek electoral history, women were allowed to vote. In these elections is rumored that 1,000,000 people voted.

Liberation, the Dekemvriana, and the road to the Civil War

After Liberation in October 1944, the tensions between EAM and right-wing, nationalist or western-oriented republican forces, which were supported by Great Britain, escalated. Originally, as agreed at the Lebanon conference, EAM participated in the government of national unity under George Papandreou with 6 ministers. Due to disagreements regarding the disarmament of ELAS and the formation of a national army, on 1 December, the EAMite ministers resigned. EAM organized a demonstration in Athens on December 3, 1944 against British interference. The exact details of what happened have been debated ever since, but gendarmes opened fire on the crowd, resulting in 25 dead protesters (including a six-year-old boy) and 148 wounded. This clash escalated into a month-long conflict between ELAS and the British and Greek governmental forces, known as the "December events" (Dekemvrianá), which resulted in a British and Greek government victory. In February, the Varkiza agreement was signed, leading to the disbandment of ELAS. In April, the SΚΕ and ΕLD parties left EAM. EAM was not dissolved, but was hence for all intents and purposes merely an expression of the KKE. During the 1945-1946 period, a conservative terror campaign (the "White Terror") was launched against EAM-KKE supporters. The country became polarized, eventually leading to the outbreak of the Greek Civil War in March 1946, which lasted until 1949. In its aftermath, and in the context of the Cold War, KKE was outlawed, and EAM/ELAS vilified as an attempt at "Communist take-over" and accused for various crimes against political rivals. The issue remains a highly controversial subject to this day. With the coming of Andreas Papandreou to power in 1981 however, EAM was recognized as a resistance movement, and the fighters of ELAS were honored and given state pensions.[citation needed]