Inflation in the Weimar Republic

Inflation in the Weimar Republic 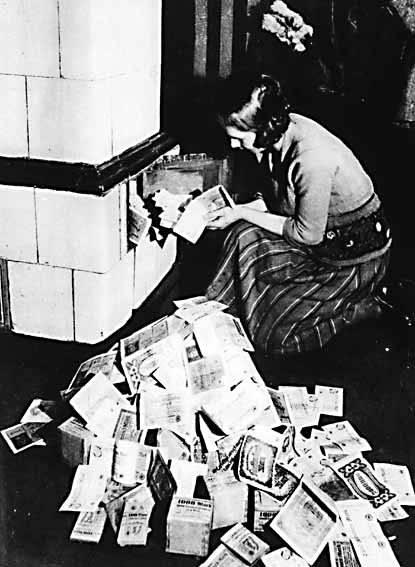 thumb|German banknotes used as fuel.It was cheaper to use than wood.The inflation in the Weimar Republic was a period of in (the ) during 1921-1923.

The hyperinflation episode in the in the 1920s was not the first hyperinflation, nor was it the only one in early 1920s Europe. However, as the most prominent case following the emergence of economics as a science, it drew interest in a way that previous instances had not. Many of the dramatic and unusual economic behaviors now associated with hyperinflation were first documented systematically in Germany: order-of-magnitude increases in prices and interest rates, redenomination of the currency, consumer flight from cash to hard assets, and the rapid expansion of industries that produced those assets. described the situation in "": "The inflationism of the currency systems of Europe has proceeded to extraordinary lengths. The various belligerent Governments, unable, or too timid or too short-sighted to secure from loans or taxes the resources they required, have printed notes for the balance."

It is sometimes argued that Germany had to inflate its currency to pay the war reparations required under the , but this is misleading. The German currency was relatively stable at about 60 Marks per US Dollar during the first half of 1921. But the "" in May 1921 demanded reparations in gold to be paid in annual installments of 2,000,000,000 gold marks plus 26 percent of the value of Germany's exports. The first payment was paid when due in August 1921. ["The Great Inflation", William Guttmann, Gordon & Cremonesi, London, 1975, pages 21-26.] That was the beginning of an increasingly rapid devaluation of the Mark which fell to less than one third of a cent by November 1921 (approx. 330 Marks per US Dollar). The total reparations demanded was 132,000,000,000 gold marks which was far more than the total German gold or foreign exchange. An attempt was made by Germany to buy foreign exchange, but that was paid in treasury bills and commercial debts for Marks which only increased the speed of devaluation.

During the first half of 1922 the mark stabilized at about 320 Marks per Dollar accompanied by international reparations conferences including one in June 1922 organized by U.S. investment banker [Balderston, page 21] When these meetings produced no workable solution, the inflation changed to hyperinflation and the Mark fell to 8000 Marks per Dollar by December 1922. The cost of living index was 41 in June 1922 and 685 in December, an increase of more than 16 times. In January 1923 French and Belgian troops occupied the industrial region of Germany in the Ruhr valley to ensure that the reparations were paid in goods, such as coal from the and other industrial zones of Germany, because the Mark was practically worthless. Although reparations accounted for about one third of the German deficit from 1920 to 1923, [Costantino Bresciani-Turroni, page 93] the government found reparations a convenient scapegoat. Other scapegoats included bankers and speculators (particularly foreign), both of which groups had, in fact, exacerbated the hyperinflation through the normal course of their profit-seeking. The inflation reached its peak by November 1923, but ended when a new currency (the Rentenmark) was introduced. The government stated that this new currency had a fixed value, and this was accepted.

Hyperinflation did not directly bring about the Nazi takeover of Germany; the inflation ended with the introduction of the Rentenmark and the Weimar Republic continued for a decade afterward. The inflation did, however, raise doubts about the competence of liberal institutions, especially amongst a middle class who had held cash savings and bonds. It also produced resentment of Germany's bankers and speculators, many of them , whom the government and press blamed for the inflation.