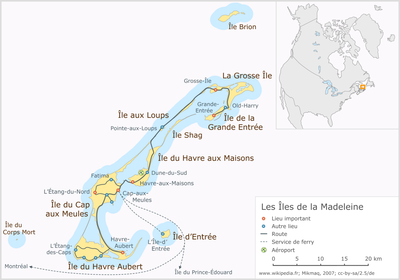 The Magdalen Islands (French, Îles de la Madeleine) form a small archipelago in the Gulf of Saint Lawrence with a land area of 205.53 square kilometres (79.36 sq mi). Though closer to Prince Edward Island and Nova Scotia, the islands form part of the Canadian province of Quebec.

The islands form the territory equivalent to a regional county municipality (TE) and census division (CD) of Les Îles-de-la-Madeleine. Its geographical code is 01.

Jacques Cartier was the first European to visit the islands, in 1534. However, Mi'kmaq Indians had been visiting the islands for hundreds of years as part of a seasonal subsistence round, probably to harvest the abundant walrus population. A number of archaeological sites have been excavated on the archipelago.

It was named in 1663 by the seigneur of the island, François Doublet, after his wife, Madeleine Fontaine.[2] In 1755, the islands were inhabited by French-speaking Acadians. When the British expelled the Acadians from the rest of what are now the Maritime Provinces of Canada, they did not come as far as the Magdalen Islands. To this day, many inhabitants of the Magdalen Islands (Madelinots) fly the Acadian flag and think of themselves as both Acadians and Québécois.

The islands were administered as part of the Colony of Newfoundland from 1763 until 1774, when they were joined to Quebec by the Quebec Act. 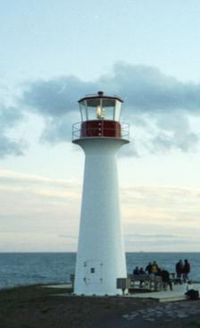 A lighthouse at Les Caps

Until the 20th century, the islands were completely isolated during the winter, since the pack ice made the trip to the mainland impassable by boat. The inhabitants of the island could not even communicate with the mainland. In the winter of 1910, they sent an urgent request for help to the mainland by writing many letters and sealing them up inside a molasses barrel (or puncheon), which they set adrift. When this reached the shore, on Cape Breton Island, the government sent out an icebreaker to bring aid. Within a few years, the Magdalens were given one of the new wireless telegraph stations so that the inhabitants could at least have some communication in the winter. The puncheon is now famous, and every tourist shop sells replicas.

At one time, large walrus herds were found near the islands but they had been eliminated due to overhunting by the end of the 18th century. The islands' beaches provide habitat for the endangered Piping Plover and the Roseate Tern.

Lighthouses were eventually set up, and this reduced the number of shipwrecks, but there are still many old hulks on the beaches and under the waters. 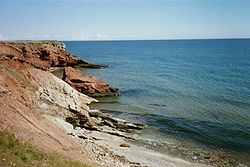 Cliffs along the shore of Grosse Île

Tourism is a major industry on the Magdalen Islands. The islands have many kilometres of white sand beaches, along with steadily eroding sandstone cliffs. It is an excellent destination for bicycle camping, sea kayaking, windsurfing and kitesurfing. During the winter months, beginning in mid-February, eco-tourists visit to observe new-born and young harp seal pups on the pack ice in the Gulf of St. Lawrence surrounding the islands.

The island is home to Canadian Salt Company Seleine Mines, which produces road salt for use in Quebec, Atlantic Canada and the United States eastern seaboard.[5] Opened in 1982, the salt mine and plant is located in Grosse-Île and extracts salt from an underground mine 30 metres (98 ft) below Grande-Entrée Lagoon, produces 1 million tons of salt, and employs 200 people.

The Magdalen Islands Airport at Havre-aux-Maisons offers scheduled air service to the Maritimes and mainland Quebec.