Map of the world showing the achievements of each country during the 2008 Summer Olympics in Beijing, People's Republic of China.

The 2008 Summer Olympics medal table is a list of National Olympic Committees (NOCs) ranked by the number of gold medals won by their athletes during the 2008 Summer Olympics, held in Beijing, the capital of the People's Republic of China, from 8 August to 24 August 2008. Approximately 11,028 athletes from 204 NOCs participated in 302 events in 28 sports.[1]

Athletes from 86 countries won medals, leaving 118 countries without a medal, and 54 of them won at least one gold medal. Both of these categories set new records. Athletes from China won 51 gold medals, the most of any nation at these Olympics, and led the gold medal count for the first time in their Olympic history. Athletes from the United States won the most total medals, with 110. Afghanistan,[2] Mauritius,[3] Sudan,[4] Tajikistan[5] and Togo[6] won their first Olympic medals. Athletes from Mongolia (which previously held the record for most medals without a gold)[7] and Panama[8] won their first gold medals. An athlete from Serbia won its first medal as an independent NOC, having previously won medals as part of Yugoslavia and Serbia and Montenegro.[9]

From left to right: Tore Brovold from Norway (silver), Vincent Hancock from USA (gold) and Anthony Terras from France (bronze) with the medals they earned in Men's skeet shooting 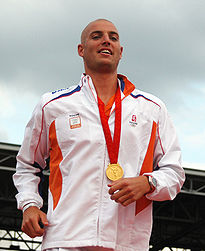 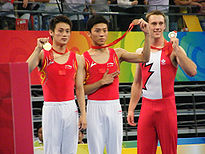 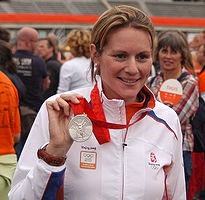 Femke Dekker from the Netherlands won a silver medal in the Women's eights in rowing.

From left to right: Ryan Lochte (bronze), Michael Phelps (gold), both from USA, and László Cseh from Hungary (silver) show off the medals they earned from the men's 400 metre individual medley. 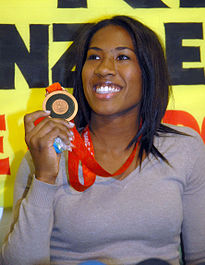 The ranking in this table is based on information provided by the International Olympic Committee (IOC) and is consistent with IOC convention in its published medal tables. By default, the table is ordered by the number of gold medals the athletes from a nation have won (in this context, a "nation" is an entity represented by a National Olympic Committee). The number of silver medals is taken into consideration next and then the number of bronze medals. If nations are still tied, equal ranking is given and they are listed alphabetically by IOC country code. 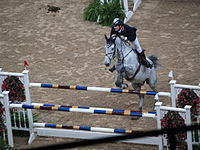 Tony André Hansen was stripped of his bronze medal when his horse tested positive for a banned substance.

On August 15, 2008, the International Olympic Committee announced North Korean shooter Kim Jong-su had tested positive for the banned substance propranolol and was stripped of his two medals. He had won a bronze medal in the 10 metre air pistol and silver in the 50 metre pistol. After Kim Jong-su was disqualified, the bronze medal in the 10 metre air pistol went to Jason Turner of the United States; in the 50 metre pistol, the silver medal went to Tan Zongliang of China, and the bronze medal to Vladimir Isakov of Russia.[14]

Swedish wrestler Ara Abrahamian was originally awarded a bronze medal in the Greco-Roman 84 kg event. However, at the medal ceremony he walked off the podium and dropped his medal on the mat in protest of the judging in his event. On August 16, 2008, the International Olympic Committee decided to strip him of his medal because they felt it amounted to a political demonstration and was disrespectful to other athletes.[15]

Ukrainian athlete Lyudmyla Blonska, who finished second in the women's heptathlon, tested positive for the steroid methyltestosterone. On August 22, 2008, the International Olympic Committee officially stripped Blonska of her medal, and as a result, the silver medal went to Hyleas Fountain of the United States, and the bronze medal to Tatyana Chernova of Russia.[16]

Belarussian athletes Vadim Devyatovskiy and Ivan Tsikhan, who won silver and bronze respectively in the men's hammer throw, both tested positive for abnormal levels of testosterone. After attending a disciplinary hearing in September, they were stripped of their medals on December 11, 2008. Krisztián Pars of Hungary was given the silver medal, and Koji Murofushi of Japan was given the bronze.[17] However, both of the Belarussian athletes had their medals reinstated because the doping tests weren't handled properly.[13]

Norwegian equestrian athlete Tony André Hansen's horse tested positive for the pain relieving medication capsaicin, a banned substance. Hansen, who won a bronze medal in the team jumping event, was disqualified. In the team jumping system, the top three scores garnered by the four riders are counted. Hansen had the best score on his team, and it was removed from the total. Without Hansen's score, his team was below the bronze medal threshold so the medal was awarded to the team from Switzerland on December 22, 2008.[18]

On November 18, 2009, the IOC announced that two medalists had been stripped of their medals. First, Rashid Ramzi of Bahrain had been stripped of the gold medal in the men's 1500 m race. Ramzi had been the first athlete from Bahrain to win an Olympic gold medal. His frozen blood sample was re-tested and found to contain traces of Cera, a stamina-building blood-booster. Kenyan Asbel Kipruto Kiprop was upgraded to gold, Nicholas Willis of New Zealand was given the silver and Mehdi Baala of France received the bronze. Also, Italian cyclist Davide Rebellin had tested positive for Cera and had been stripped of the silver medal he earned in the men's road race.[19]