Moscow State Institute of International Relations (MGIMO-University) (Russian: Московский государственный институт международных отношений (Университет) МИД России, often abbreviated МГИМО, MGIMO) is the diplomatic school of the Ministry of Foreign Affairs of Russia. It is the oldest and the most renowned school in Russia for preparing professionals in international relations and diplomacy. MGIMO is one of the members of the Association of Professional Schools of International Affairs. 56 languages are taught at MGIMO, making it the university in the world who offers most languages.

MGIMO used to have a reputation for being elitist (for example, it is usually considered common knowledge in post-USSR countries that, at least during the USSR times, admission to MGIMO was mostly reserved to children of the Party and government nomenklatura). Many of its current students are from families of political, economic and intellectual elites in Russia. At the same time, it remains one of Russia's best educational institutions as it admits a lot of talented students from all over the CIS and holds high ranks in terms of alumni success and average level of standard test results of admitted students. It is also known for having one of the best teaching teams in Europe. Many of the current professors of MGIMO were ambassadors or ministers.

From the outset MGIMO was intended to become a unique academic research and education center. It quickly became Russia’s leading diplomatic training institution, with MGIMO academics making a major contribution across the fields of international relations, country and regional studies, international law and international economic relations. Additionally, it took a position at the forefront of scientific endeavor, with the establishment of several world renowned scientific schools, and as the workplace of many outstanding Russian scientists, including Academy of Sciences members E.Tarle, L.Ivanov, V.Trukhanovskiy, S.Tikhvinskiy, N. Inozemtsev, and Y.Frantsev.

In 1954 the Moscow Institute of Oriental Studies, one of the oldest Russian institutes, the successor of the Lasarevsky School created in 1815 was integrated into MGIMO. The Institute’s library was greatly enriched by the addition of the famous Lasarevskaya library, which had no peer for its large body of oriental literature.

In 1958 MGIMO incorporated the Institute of Foreign Trade, which had previously operated under the aegis of the USSR Ministry for Foreign Trade. This led to an expansion of the School of International Economic Relations and a focus on training foreign trade and economic specialists. In 1969 the International Journalism School was founded.

In the late 1980s and early 1990s, the profound social and economic change sweeping Russia saw major changes in MGIMO’s structure and educational programs. In 1991 a new School of International Business and Business Administration was founded.

Since 1992 the Institute has been headed by the Rector, Professor Anatoly Torkunov, whose leadership has been instrumental in overcoming the turmoil of the 1990s. Under his tenure MGIMO has embarked on a comprehensive program of educational modernization and innovation, including closer integration with European higher education through entrance into the Bologna process, the broadening of international contacts, and the elevation of the Institute to the forefront of international education and science.

In 1994 MGIMO was granted University status. The same year saw the creation of the International Institute of Administration, following a decision by the Russian Government on government administration and municipal management training. 1998 saw the founding of the School of Political Science, the first of its type in Russia to focus on training public service managers.

In 2000 the International Institute of Energy Policy and Diplomacy was established under the aegis of MGIMO on the initiative of leading Russian energy companies. The mission of the Institute is to train managers for the promotion of international energy cooperation.

Every year MGIMO accepts more than one thousand new students, from every part of the Russian Federation, and internationally from more than 60 countries. Over 35 thousand Russian and global alumni are proud to have graduated from Moscow State Institute of International Relations. Divisions of the MGIMO Alumni Association are active in many countries around the world. In 2007, the MGIMO Alumni Association established Russia's first university endowment development foundation for MGIMO. 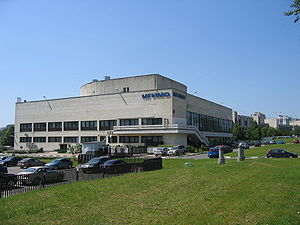 MGIMO provides training in the fields of international relations, political science, global economy, law, management, journalism and public relations to 4,500 undergraduate students as well as graduate researchers. The faculty of about 1,100 includes more than 150 professors (holding a "Doctor of Sciences" degree), more than 400 holders of "Candidate of Sciences" degree, 300 associate professors, as well as over two dozen full and correspondent members of the Russian Academy of Sciences and various specialised Russian and international academies, nine Merited scientists of Russia.

The MGIMO-University library contains over 700 000 volumes in books and magazines in Russian and more than 30 foreign languages. The library also includes the Museum of Rare Books which boasts a collection of 21 000 unique volumes.

The university is famous for its students' activity. There are several main students organizations active at the university: