Light cruiser Ōyodo (大淀 軽巡洋艦, Ōyodo keijun'yōkan?), named after the Ōyodo River in Kyūshū, Japan was a light cruiser of the Imperial Japanese Navy, the only ship of her class.

The Ōyodo design was approved under the 1939 4th Replenishment Program as an enlarged and improved version of the Agano-class. It was designed to be the flagship for attack groups of submarines. Initially, plans were made for eight vessels in the class. However, only two ships were actually authorised, of which only one, Ōyodo, was laid down; the second ship was to be named Niyodo. Immediately after Ōyodo was completed, all available shipbuilding resources at the Kure naval yard were diverted to build more aircraft carriers.

Although the same general hull design as for the Agano was adopted, with flush deck and bulbous bow, the armament differed both in layout and weaponry, and the armour protection was reduced.

Ōyodo's main armament comprised six 155 mm (6.1 inch) 60 caliber 3rd Year Type guns in two triple-gun turrets arranged in conventional superfiring fashion. This gun was originally developed as a dual purpose (anti-surface and anti-aircraft) weapon for the Mogami-class cruisers; when those ships underwent reconstruction in the 1930s and had their triple 155 mm turrets replaced with 203 mm (8 inch) twin turrets, the now-surplus triple 155 mm turrets were mounted on Ōyodo (as well as the Yamato-class battleships). Their slow rate of fire (5 to 6 rounds per minute) and limited elevation (up to only 55 degrees) made them unsuitable for the anti-aircraft role, but they were excellent anti-ship weapons.

The main armament was all located forward of the superstructure, much like the British Nelson-class battleships, French Dunkerque and Richelieu class and the Japanese Navy's own Tone-class heavy cruisers. Like the Tone class, the Ōyodo-class ships were intended to be scouting cruisers and hence the entire deck of the ship aft of the superstructure was devoted to aircraft facilities. Indeed, again in view of their intended role, no torpedo tubes were fitted, making the Ōyodo class the sole class of cruisers in the Imperial Japanese Navy without these weapons. The weight thus saved was invested instead in increased floatplane capacity (up to six) and a heavy-duty 45 m (148 ft) catapult that was necessary for the new E15K1 floatplane.

Ōyodo's heavy anti-aircraft battery comprised eight 100 mm (3.9 inch)/65 calibre Type 98 guns in four twin mounts. These guns are the same as that carried by the Akizuki-class destroyers and the never-built B64 class cruisers. The performance of this weapon was superb, and it is considered to be the best Japanese heavy AA gun of the war. Their main fault was a rather short service life, the result of a high muzzle velocity (1,000 m/s) and a fast rate of fire (15–20 rounds per minute).

The remaining AA armament consisted of the ubiquitous (in the Japanese Navy) 25 mm/60 caliber Type 96 AA gun, which was based on a French Hotchkiss design but was a very mediocre AA weapon with a low effective rate of fire, slow elevation and training, and lack of effective remote power control.

The E15K1 'Shiun' floatplane (Allied codename "Norm") was intended to perform reconnaissance for the submarine flotilla in areas where the enemy had air superiority, and hence was to be able to take on land-based fighters. To achieve this, the plane was designed with two underwing stabilizing floats that could be retracted, and a large central float that could be jettisoned, to increase performance during combat.

However, while incorporating this and several other innovations, the plane never really worked as designed and its troubled development resulted in only four aircraft entering service by 1942, and only fifteen were completed in total. Six were sent to Palau where Ōyodo was operating for operational testing. Despite a more powerful engine, the performance of the E15K1's (being about 500 kg heavier than the more common Aichi E13A1 "Jake") was poor and they were quickly lost to attacking fighters. As a result production of the aircraft, which had barely begun, was stopped and the entire E15K1 program shelved in early 1944. Ōyodo hence never operated more than two aircraft, particularly after her refit later in which her large hangar was converted to other uses.

As this class was larger and had greater displacement than Agano, the installed powerplant was of an uprated design, producing 110,000 shp to achieve the same speed (35 knots) as the Agano-class. Ōyodo's designed radius of action was also very large, at 10,500 nautical miles (18,500 km).

After her working-up period, on 26 July 1943 Ōyodo joined the fleet at Truk, Caroline Islands, the Japanese Navy's main fleet base in the Pacific. In December 1943, Ōyodo participated in an operation to reinforce the garrisons at Rabaul and Kavieng. At that time Ōyodo had just become the flagship of Vice Admiral Jisaburo Ozawa's Third Fleet. While returning to Truk on 1 January 1944 Ōyodo was slightly damaged by US aircraft of Task Group 50.2. The following month, Japanese radio intelligence learned of an impending massive US strike on Truk, and all heavy surface units (including Ōyodo) were quickly withdrawn from the base. Ōyodo was then transferred to Palau. In March that base too became threatened, and Ōyodo withdrew to Singapore. During this movement the cruiser was one of the escorts of the battleship Musashi when the latter was torpedoed and damaged by the US submarine USS Tunny.

As final flagship of the Combined Fleet

By the start of 1944, it was recognised from the progress of the war and the failure of the E15K1 floatplane program that Ōyodo would not be able to fulfill her original design role. Hence she returned to Yokosuka naval base in March 1944 and had the heavy-duty catapult exchanged for the shorter (18 m/59 ft), standard type, took on two of the standard Aichi E13A1 floatplanes, and the hangar converted to accommodate Fleet Headquarters staff. Ōyodo was thus modified into the final flagship of the Combined Fleet. During this refit, six Type 96 triple-mount and 11 single-mount 25 mm AA guns were also installed, bringing the Ōyodo's 25 mm AA gun total to 47 barrels. A Type 22 surface-search radar was also fitted.

The refit/conversion work was completed at the end of March 1944, and after shuttling between a few ports in Japan, Ōyodo departed Yashima anchorage on 20 October 1944 towards the Philippines as part of Operation Sho-Ichi-Go ("Victory number 1") — or the Battle of Leyte Gulf. The objective of the operation was to repel the American invasion of the Philippines. Ōyodo was part of Vice Admiral Ozawa's Northern Mobile ("Decoy") Force, which was to bait the American aircraft carrier strike force away from the main Japanese strike force. The decoy force included several old carriers (by now bereft of aircraft), cruisers and destroyers. Ōyodo was the only warship in Ozawa's force that had reconnaissance floatplanes, and both E13A1's performed reconnaissance and anti-submarine patrols over the fleet.

On 25 October 1944, off Cape Engaño, the Northern Mobile Force was attacked by Vice Admiral Marc A. Mitscher's Task Force 38 carrier planes in a massive strike consisting 527 sorties in five strikes. During the first strike, Ōyodo suffered two near-misses, but at 0848 she was hit by a bomb that damaged her Number 4 boiler room. At 1054, Vice Admiral Ozawa left the sinking carrier Zuikaku and transferred his flag to Ōyodo. Ozawa then ordered his force to retire northward. Later that day Ōyodo was hit by two rockets from F6F Hellcat fighter-bombers and damaged by the near-miss of a bomb. Ōyodo and the surviving ships arrived at Sakawa Bay, Amami-Oshima the next day.

Final stages of the war 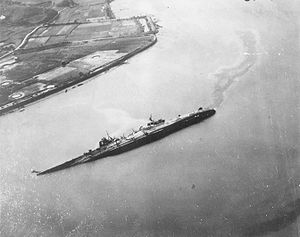 A few days later Ōyodo was sent to Manila on a transport run, arriving on 1 November 1944. Throughout the remainder of the year, Ōyodo was actively involved in numerous operations around Brunei, Camranh and the Philippines, attacking US convoys, bombarding landing sites and engaging US naval forces in the area. Although other ships with her were either damaged or sunk during the sorties, Ōyodo emerged unscathed.

By January 1945, Ōyodo had arrived in Singapore, where she took on 300 tons of rubber, zinc, mercury, tin and petrol. Other ships in her unit were similarly loaded with critical war supplies bound for Japan. On 11 February 1945 Ōyodo's unit, the "Completion Force", left Singapore for Japan in what was designated Operation Kita, and along the way escaped pursuit and dodged attacks by twenty-three Allied submarines. The Force arrived at Kure on 20 February 1945.

Ōyodo remained at Kure for the remainder of the war, and on 19 March 1945, Vice Admiral (later Admiral) Marc A. Mitscher's Task Force 58 aircraft carriers made the first carrier attack on the Kure Arsenal. More than 240 aircraft (SB2C Helldiver dive bombers, F4U Corsair and F6F Hellcat fighter-bombers) attacked the Japanese fleet. Three 500 pound bombs hit Ōyodo; she started to flood, but was towed to Etajima and beached.

On 24 July 1945 US Task Force 38 launched a massive attack to destroy any and all remaining units of the Japanese Navy. Ōyodo was strafed and hit by four 500 pound bombs and many near misses that left her listing to starboard. Four days later, another all-day-long attack was launched by the US carrier fleet. Ōyodo was hit by four more bombs; at 1000 hours, hits near the bridge caused extensive flooding and Ōyodo took on a heavy list to starboard. At 1200, she capsized to starboard in shallow water. About 300 crewmen were killed, while her remaining crew abandoned ship that afternoon.

Ōyodo was removed from the Navy List on 20 November 1945.