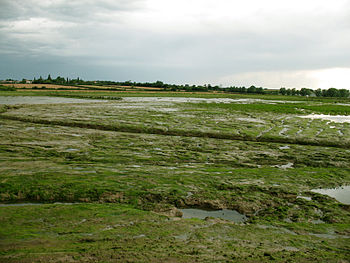 In the context of coastal erosion, managed retreat (also managed realignment) allows an area that was not previously exposed to flooding by the sea to become flooded by removing coastal protection. This process is usually in low lying estuarine areas and almost always involves flooding of land that has at some point in the past been claimed from the sea.

Managed retreat is often a response to sea level rise exacerbated by local subsidence of the land surface due to isostatic rebound in the north.

In the UK the main reason for implementation of Managed Realignment is generally to improve coastal stability, essentially replacing artificial ‘hard’ coastal defences with natural ‘soft’ coastal landforms (Pethick 2002). This process can be used to protect areas of land further inland rather than that near the coast by relying on natural defences to absorb or dampen the force of waves.

In addition to being used as a means of coastal defence, Managed Realignment has also been used in a number of cases to mitigate for loss of intertidal habitat.

Although land claim has been an important factor for salt marsh loss in the UK in the past (Allen 1992) the majority of current salt marsh loss in the UK is believed to be due to erosion (Morris et al. 2004). This erosion may involve coastal squeeze, where protective sea walls prevent the landward migration of salt marsh in response to sea level rise when sediment supply is limited (Hulme 2005; Morris et al. 2004). Salt marshes are protected under the EU Habitats Directive as well as providing habitat for a number of species protected by the Birds Directive(see Natura 2000). Following this guidance, the UK’s biodiversity action plan aims to prevent net losses to the area of salt marsh present in 1992. It is therefore a legal requirement that all losses in marsh area must be compensated by replacement habitat with equivalent biological characteristics (Crooks et al. 2001). This equates to the need to restore approximately 1.4 km² of salt marsh habitat per year in the UK.

There are no direct costs apart from that of removing any defences already in place and maintenance costs are very low.

Sediment flow is also restored to its natural state, beaches can be naturally replenished due to erosion of the coast, providing protection and the balance of the coastline returns.

A certain amount of land will inevitably be lost in this process while beaches are being built up resulting in settlements, farmland and other property being destroyed. Because of this, managed retreat is often not a socially acceptable plan and may invoke the need for compensation to land-owners. Intertidal sites are often a rich archaeological resource and the loss of heritage is a factor to weighed in managed retreat projects.

There are no agreed protocols on the monitoring of MR sites (Atkinson et al. 2001) and, consequently, very few of the sites are being monitored consistently and effectively (Wolters et al. 2005c). Due to the low levels of monitoring there is little evidence on which to base future managed realignment projects. This has led to the results of Managed Realignment schemes being extremely unpredictable. 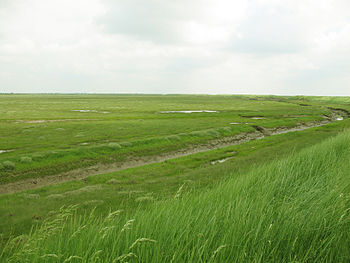 In the UK, the first managed retreat site was an area of 8,000 square metres at Northey Island in Essex flooded in 1991, followed by larger sites at Tollesbury and Orplands (1995), Freiston Shore (2001) and Abbott's Hall Farm, at Great Wigborough in the Blackwater Estuary, it is one of the largest managed retreat schemes in Europe. It covers nearly 280 hectares of land on the north side of the estuary (2002) and a number of others.

At present approximately 6 km² of salt marsh have been restored by MR in the UK (Mossman et al. In prep). One of the major reasons cited for the slow pace of current salt marsh restoration in the UK (Morris et al. 2004) is the uncertainty associated with the practice (Foresight).

Atkinson, P. W., S. Crook, A. Grant, and M. M. Rehfisch. 2001. The success of creation and restoration schemes in producing intertidal habitat suitable for waterbirds. English Nature. Hulme, P. E. 2005. Adapting to climate change: is there scope for ecological management in the face of a global threat? Journal of Applied Ecology 42:784-794.

The following references review the UK and US experience respectively: