À rebours (translated into English as Against Nature or Against the Grain) (1884) is a novel by the French writer Joris-Karl Huysmans. Its narrative concentrates almost entirely on its principal character, and is mostly a catalogue of the tastes and inner life of Jean Des Esseintes, an eccentric, reclusive aesthete and antihero, who loathes 19th century bourgeois society and tries to retreat into an ideal artistic world of his own creation. À rebours contains many themes which became associated with the Symbolist aesthetic. In doing so, it broke from naturalism and became the ultimate example of "decadent" literature.

A rebours marked a watershed in Huysmans' career. His early works had been Naturalist in style, being realistic depictions of the drudgery and squalor of working- and lower-middle-class life in Paris. However, by the early 1880s, Huysmans regarded this approach to fiction as a dead end. As he wrote in his preface to the 1903 reissue of A rebours:

It was the heyday of Naturalism, but this school, which should have rendered the inestimable service of giving us real characters in precisely described settings, had ended up harping on the same old themes and was treading water. It scarcely admitted - in theory at least - any exceptions to the rule; thus it limited itself to depicting common existence, and struggled, under the pretext of being true to life, to create characters who would be as close as possible to the average run of mankind.

Huysmans decided to keep certain features of the Naturalist style, such as its use of minutely documented realistic detail, but apply them instead to a portrait of an exceptional individual: the protagonist Jean Des Esseintes. In a letter of November 1882, Huysmans told Émile Zola, the leader of the Naturalist school of fiction, that he was changing his style of writing and had embarked on a "wild and gloomy fantasy". This "fantasy", originally entitled Seul (Alone), was to become A rebours.[1] The character of Des Esseintes is partly based on Huysmans himself and the two share many of the same tastes, although Huysmans, on his modest civil service salary, was hardly able to indulge them to the same extent as his upper-class hero. The writers and dandies Baudelaire and Jules Barbey d'Aurevilly also had some influence but the most important model was the notorious aristocratic aesthete Robert de Montesquiou, who was also the basis for Baron de Charlus in Proust's À la recherche du temps perdu. Montesquiou's furnishings bear a strong resemblance to those in Des Esseintes' house:

In 1883, to his eternal regret, Montesquiou admitted Stéphane Mallarmé [to his home]. It was late at night when the poet was shown over the house, and the only illumination came from a few scattered candelabra; yet in the flickering light Mallarmé observed that the door-bell was in fact a sacring-bell, that one room was furnished as a monastery cell and another as the cabin of a yacht, and that the third contained a Louis Quinze pulpit, three or four cathedral stalls, and a strip of altar railing. He was shown, too, a sled picturesquely placed on a snow-white bearskin, a library of rare books in suitably coloured bindings, and the remains of an unfortunate tortoise whose shell had been coated with gold paint. According to Montesquiou writing many years later in his memoirs, the sight of these marvels left Mallarmé speechless with amazement. 'He went away,' records Montesquiou, 'in a state of silent exaltation [...] I do not doubt therefore that it was in the most admiring, sympathetic and sincere good faith that he retailed to Huysmans what he had seen during the few moments he spent in Ali-Baba's Cave.'[2] 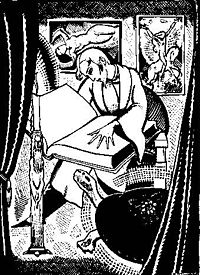 Des Esseintes as in the 1931 Illustrated Edition of À rebours.

Jean Des Esseintes is the last member of a powerful and once proud noble family. He has lived an extremely decadent life in Paris which has left him disgusted with human society. Without telling anyone, he absconds to a house in the countryside.

He fills the house with his eclectic art collection (which notably consists of reprints of paintings of Gustave Moreau). Drawing from the theme of Gustave Flaubert's Bouvard and Pecuchet, Des Esseintes decides to spend the rest of his life in intellectual and aesthetic contemplation[3]. Throughout his intellectual experiments, he recalls various debauched events and love affairs of his past in Paris.

He conducts a survey of French and Latin literature, rejecting the works approved by the mainstream critics of his day. Amongst French authors, he shows nothing but contempt for the Romantics but adores the poetry of Baudelaire and that of the nascent Symbolist movement of Paul Verlaine, Tristan Corbière and Stéphane Mallarmé[4], as well as the decadent fiction of the unorthodox Catholic writers Auguste Villiers de l'Isle-Adam and Barbey d'Aurevilly. He rejects the academically respectable Latin authors of the "Golden Age" such as Virgil and Cicero, preferring later "Silver Age" writers such as Petronius and Apuleius as well as works of early Christian literature, whose style was usually dismissed as the "barbarous" product of the Dark Ages. Schopenhauer, he exclaims, has seen the truth and he clearly expressed it in his philosophy[5]. He studies Moreau's paintings, he tries his hand at inventing perfumes, he creates a garden of poisonous flowers. In one of the book's most surrealistic episodes, he has gemstones set in the shell of a tortoise. The extra weight on the creature's back causes its death. In another episode, he decides to visit London after reading the novels of Dickens. He dines at an English restaurant in Paris while waiting for his train, and is delighted by the resemblance of the people to his notions derived from literature. He then cancels his trip and returns home, convinced that only disillusion would await him if he were to follow though with his plans.

Eventually, his late nights and idiosyncratic diet take their toll on his health, requiring him to return to Paris or to forfeit his life. In the last lines of the book, he compares his return to human society to that of a nonbeliever trying to embrace religion. 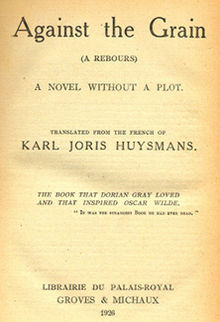 Cover of a 1926 English translation with the caption "the book that Dorian Gray loved and that inspired Oscar Wilde."

Huysmans predicted his novel would be a failure with the public and critics: "It will be the biggest fiasco of the year - but I don't care a damn! It will be something nobody has ever done before, and I shall have said what I want to say..."[6] However, when it appeared in May, 1884, the book created a storm of publicity; though many critics were scandalised, it appealed to a young generation of aesthetes and writers.

Richard Ellmann describes the effect of the book in his biography of Oscar Wilde:

Whistler rushed to congratulate Huysmans the next day on his ‘marvellous’ book. Bourget, at that time a close friend of Huysmans as of Wilde, admired it greatly; Paul Valéry called it his ‘Bible and his bedside book’ and this is what it became for Wilde. He said to the Morning News: ‘This last book of Huysmans is one of the best I have ever seen’. It was being reviewed everywhere as the guidebook of decadence. At the very moment that Wilde was falling in with social patterns, he was confronted with a book which even in its title defied them.[7]

Huysmans' former mentor, Zola, was less impressed and gave the book a lukewarm reception. Huysmans initially tried to placate him by claiming the book was still in the Naturalist style and that Des Esseintes' opinions and tastes were not his own. However, when they met in July, Zola told Huysmans that the book had been a "terrible blow to Naturalism", and accused him of "leading the school astray" and "burning [his] boats with such a book", claiming that "no type of literature was possible in this genre, exhausted by a single volume".[8]

While he slowly drifted away from the Naturalists, Huysmans won new friends among the Symbolist and Catholic writers whose work he had praised in his novel. Stéphane Mallarmé responded with the tribute "Prose pour des Esseintes", published in La Revue indépendante on January 1, 1885. This famous poem has been described as "perhaps the most enigmatic of Mallarmé's works"[9]. The opening stanza gives some of its flavour:

Hyperbole! Can't you arise
From memory, and triumph, grow
Today a form of conjuration
Robed in an iron folio?
(Translated by Donald Davie)[10]

The Catholic writer Léon Bloy praised the novel, describing Huysmans as "formerly a Naturalist, but now an Idealist capable of the most exalted mysticism, and as far removed from the crapulous [gluttonous or drunken] Zola as if all the interplanetary spaces had suddenly accumulated between them."[11] In his review, Barbey d'Aurevilly compared Huysmans to Baudelaire, recalling: "After Les Fleurs du mal I told Baudelaire it only remains for you to choose between the muzzle of the pistol and the foot of the Cross. But will the author of A Rebours make the same choice?"[12] His prediction eventually proved true when Huysmans converted to Catholicism in the 1890s.

It is widely believed that À rebours is the "poisonous French novel" that leads to the downfall of Dorian Gray in Oscar Wilde's The Picture of Dorian Gray. The book's plot is said to have dominated the action of Dorian, causing him to live an amoral life of sin and hedonism. Ellmann writes:

Wilde does not name the book but at his trial he conceded that it was, or almost, Huysmans’s A Rebours…To a correspondent he wrote that he had played a ‘fantastic variation’ upon A Rebours and some day must write it down. The references in Dorian Gray to specific chapters are deliberately inaccurate.[13]