"Deep Space Homer" is the fifteenth episode of The Simpsons' fifth season and first aired on February 24, 1994.[2] The episode was directed by Carlos Baeza and was the only episode of The Simpsons written by David Mirkin, who was also the executive producer at the time.[1] The episode follows Homer becoming an astronaut, and the ensuing chaos when the navigation system on his space shuttle is destroyed. Buzz Aldrin and James Taylor both guest starred as themselves.[2] The critically acclaimed episode became the source of the Overlord meme, and features numerous film parodies, mostly of The Right Stuff and 2001: A Space Odyssey. A copy of the episode is available for astronauts to watch at the International Space Station.

At the Springfield Nuclear Power Plant, it is time for the ceremony for the "Worker of the Week" award and Homer, the only employee who has never won the award, is confident he will win. However, Mr. Burns gives the award to an 'inanimate carbon rod'. The dejected Homer, feeling that no one respects him, turns to TV for solace and happens upon a live space shuttle launch, which he finds dull. Meanwhile, NASA, frustrated over its drop in the Nielsen ratings, decides to send an "average shmoe" into space as the solution. At that moment, Homer telephones NASA to complain about their "boring space launches," and NASA chiefs realize they have found their man. When they arrive at Moe's Tavern in search of Homer, he believes he is in trouble for making a prank call to NASA and blames Barney for the incident. The NASA employees ask Barney to be an astronaut, and when Homer realizes what the proposal entails, he steps in and takes credit for the call.

NASA takes both Homer and Barney to Cape Canaveral for training. As only one of them can go into space, they soon find themselves in competition. Under NASA's alcohol ban, the newly sober Barney quickly develops superior skills and is selected to fly with Buzz Aldrin and astronaut Race Banyon. However, when Barney toasts his victory with non-alcoholic champagne, he inexplicably reverts to his normal alcoholic self and escapes, promptly damaging some special equipment. Homer wins by default and is selected for space flight, but after watching an episode of Itchy and Scratchy involving space exploration, he becomes very nervous about going. Just as they prepare to take off in the Corvair space shuttle, Homer runs away. He talks with Marge on the phone, and she says that he ought to take advantage of the opportunity. He agrees, and the launch, which is also a Nielsen ratings smash, proceeds.

Finally in space, Homer reveals he has smuggled potato chips on board. He opens the bag, but is unaware that, due to the effects of weightlessness, they will spread around and clog the instruments. His appetite seems to save the day as he floats after the chips, eating them, but he manages to fly into an experimental ant farm, letting the ants loose in the shuttle. James Taylor comes in over the radio to sing a song, but the disaster continues on board as the ants destroy the navigation system. James Taylor suggests that they blow the bugs out the front hatch, which the astronauts do, but Homer fails to put on his harness and is nearly blown out of the open hatch before grabbing its handle and clinging for life. Buzz pulls him inside, but due to the vacuum's sheer force, Homer breaks the hatch handle, preventing the door from closing and potentially resulting in the shuttle's destruction on re-entry. When Race declares he will attack Homer in frustration, Homer pulls a rod out of the wall to defend himself, and he inadvertently uses it to seal the door shut. With the problems solved, the shuttle successfully returns to Earth, making a convenient crash-landing through the roof of a press reporters' convention.

Although Buzz Aldrin declares Homer a hero, the press only have eyes for the inanimate carbon rod he used. The rod is featured on magazine covers with the headline "In Rod We Trust" and is given its own ticker-tape parade. Back at home, Homer is disappointed that he did not get as much respect as he had hoped, but the family still honors him for his achievement.[1][2][3]

"Deep Space Homer" was written by then-executive producer David Mirkin and is his only writing credit for The Simpsons. Mirkin had worked on the idea for the episode for a long time, basing the story on NASA's Teacher in Space Project scheme to send ordinary civilians into space in order to spark interest amongst the general public.[4] There was some controversy amongst the show's writing staff during production. Some of the writers felt that having Homer go into space was too large an idea.[4] Matt Groening felt that the idea was so big that it gave the writers "nowhere to go." Several silly gags were therefore toned down to make the episode feel more realistic, including an idea that everyone at NASA was as stupid as Homer.[5] The writers focused more upon the relationship between Homer and his family and Homer's attempts to be a hero.[4]

Buzz Aldrin, the second man to walk on the Moon, and James Taylor both guest star as themselves in this episode. Some of the writers were concerned about Aldrin's line, "second comes right after first," feeling it was insulting to Aldrin. An alternative line was written: "first to take a soil sample," but Aldrin had no problem with saying the original line.[4] A version of James Taylor's "Fire and Rain" was recorded specifically for the episode containing some altered lyrics. Taylor's original recording session was included as an extra on the DVD.[4]

The two blue collar TV shows the people at NASA watch are Home Improvement and Married... with Children.[1] In the scene where the family arrives at Cape Canaveral, the car is a parody of The Beverly Hillbillies, with Marge sitting in Granny's position.[4] Homer and Barney's duel is a reference to the classic Star Trek episode "The Gamesters of Triskelion", complete with one of Star Trek's fight themes (originally from the episode "Amok Time") and the NASA administrators betting on the combatants in "quatloos".[1] Homer running while lying on the floor and trying to read the back of his head is an homage to the Three Stooges, particularly Curly. The TV anchor is a parody of Tom Brokaw, and is voiced by Harry Shearer. A lot of words containing the letter L were intentionally written into the dialogue because the writers "enjoy the way Tom says them."[4]

The music at the start of the episode of the Itchy & Scratchy cartoon parodies the theme from the original Star Trek series. Itchy bursts out of Scratchy's stomach in a parody of the creature from the Alien films. Itchy comes out to torture Scratchy in an EVA pod much like those aboard the Discovery.[4] Homer hopes that his crew will not be sent to "that terrible Planet of the Apes," only to suddenly figure out the film's ending; he then unwittingly performs Charlton Heston's final scene in the film.[7] Much of the episode parodies The Right Stuff, with sequences such as Barney and Homer's training, Homer's walk to the shuttle and the shuttle's re-entry paying homage to the film.[4] Barney sings the first part of the Major-General's Song from Gilbert and Sullivan's The Pirates of Penzance while doing flips to show how fit he is.[8]

The episode also contains numerous references to Stanley Kubrick´s 1968 film 2001: A Space Odyssey. In the space shuttle, Homer floats in zero gravity, eating potato chips. This echoes the docking scene in 2001, with the use of the music piece The Blue Danube. At the end of the episode, Bart throws a marker into the air; in slow motion it rotates in mid-air, before a match cut replaces it with a cylindrical satellite. This parodies a similar transition scene between "The Dawn of Man" and the future sequence in the film, including the use of the famous Richard Strauss piece Also sprach Zarathustra.[7] 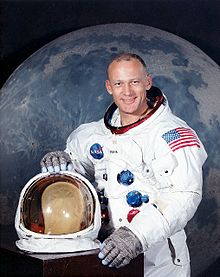 In its original broadcast, "Deep Space Homer" finished 32nd in ratings for the week of February 21-27, 1994, with a Nielsen rating of 11.1, equivalent to approximately 10.3 million viewing households. It was the highest-rated show on the Fox network that week, beating Living Single.[9]

NASA loved the episode, and astronaut Edward Lu asked for a copy of it to be sent on a supply ship to the International Space Station. The DVD remains there for astronauts to view.[4] "Deep Space Homer" is MSNBC's fourth favorite episode, citing Homer's realization that Planet of the Apes is set on Earth as "pure genius."[10] Empire magazine named it a "contender for greatest ever episode", and listed it as the third best movie parody in the show.[7] In his book, Planet Simpson, Chris Turner names the episode as being one of his five favorites, saying it is "second to none," despite listing "Last Exit to Springfield" as his favorite episode. He described the long sequence that begins with Homer eating potato chips in the space shuttle and ends with Kent Brockman's dramatic speech as being "simply among the finest comedic moments in the history of television".[11] The Daily Telegraph also named the episode among their ten favorites.[12]

Both Buzz Aldrin and James Taylor received praise for their guest performances. IGN ranked James Taylor as being the twenty-first best guest appearance in the show's history.[13] The Phoenix.com published their own list of "Top 20 guest stars" and Taylor placed eighteenth.[14] Among The Simpsons staff, the episode is a favorite of David Silverman.[6] On the other hand it also contains one of Matt Groening's least favorite jokes, when Homer's face changes into Popeye and Richard Nixon while exposed to G-force.[5]

"Deep Space Homer" is the source of the "Overlord meme", which is lifted from Kent Brockman's line "And I, for one, welcome our new insect overlords" and is commonly used on internet forums to express mock submission, usually for the purpose of humor or when a "participant vastly overstates the degree of oppression or social control expected to arise from the topic in question."[15] The term was used by New Scientist magazine,[16] and was referenced on the February 16, 2011 episode of Jeopardy! by Ken Jennings in acknowledgment of the accomplishments of the computer Watson.[17]