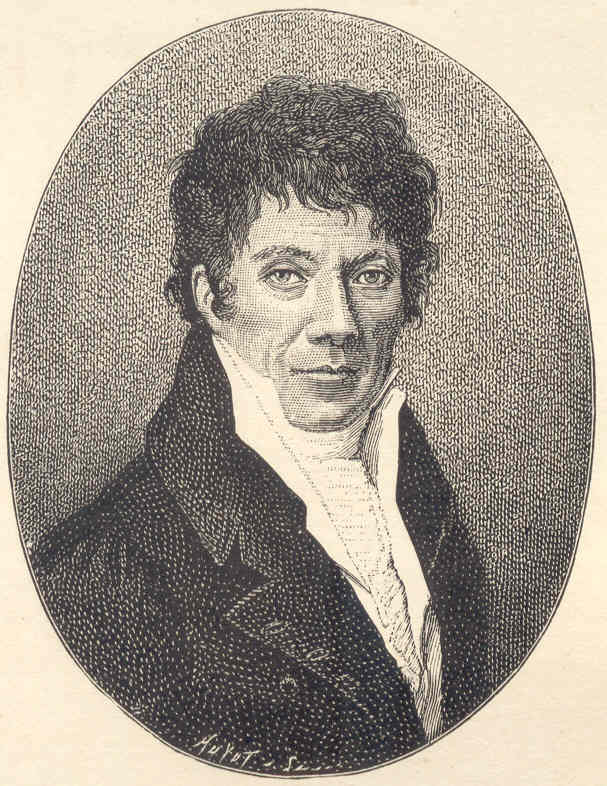 The majority of his working life was devoted to the service of the Grand Master of the Order of Malta. Following the demise of the Order in Malta, he was appointed Secretary General to the Commission of Government and later became Commissioner of Malta under French rule. After the island became a British Dominion, he was exiled from the place he’d made his home and went on to write a book about his experiences in Malta.

Son of Jean Doublet, a simple gardener and Jeanne Desire, Pierre Jean Louis Ovide Doublet was, according to his certificate of baptism, born on 25 August, 1749, within 20 kilometres of , France, not far from the . According to his memoirs he was baptized the day after his birth in the parish church of Saint Firmin. Having been educated in a religious establishment, his vocation in life seemed to be heading towards the priesthood. He is sent to but ultimately, he joins the army of the Order of St. John in .

Thus on 19 June, 1779, he enlists as a soldier to the Infantry Regiment of the Order of Malta and he reaches the rank of “premier sergeant” in November 1782.

At the same time, in 1781, he entered the service of the French Secretariat of Grand Master de Rohan (the Order also included two other secretariats, Spanish and Italian) with the title of under-secretary of its Commanderies.

His qualities were quickly recognised and on 6 October, 1783 he is rewarded by affiliation to the Order as "confratello" or "donato" (Donat of Devotion: a rank within the Order for persons recognised by the services they provided), with privilege to wear the “croix” with 6 points in gold and enamel in his buttonhole and in white linen sewn on his coat. Moreover, he acquires the right to enjoy pensions from any Commanderies in the appointment of the Grand Master, a privilege usually reserved for commanders of the Order.

His Bull of reception is recorded with the Chancery of the Order on 14 October, 1783.

The following year, on proposal of the baillif d'Almeida and the listener Bruno, he is offered promotion to the rank of "conventual chaplain". But he had already formed prospects for marriage which obliged him to refuse: the conventual chaplains, just like the knights, were obliged to make vows of chastity.

Thus 19 April, 1784, against the will of his hierarchy and in semi secrecy, he marries a young Maltese woman of modest origin, Elizabetta "BETTINA" Magri.

His final position working for the Order is as Head of the French Secretariat under the successive reigns of two Grand Masters: Emmanuel de Rohan by whom he was protected then, after the death of de Rohan in 1797, his successor Ferdinand Von Hompesch.

Within the framework of his functions, he is particularly closely associated with the creation of the Grand Priory of Russia which was to replace the Priory of Poland after the division of this country.

He was also a "Brother" of the Masonic Lodge in Malta (St. John’s Lodge of Secrecy and Harmony) which had obtained an English warrant. The Bailiff (Count) Fra’ Giulio Litta, was greatly involved in the creation of the Grand Priory of Russia, was by chance, also member of this same lodge, entirely under the benevolent indifference of the Grand-Master de Rohan (himself initiated in in 1756).

In June 1798, at the time of the capture of by Napoleon Bonaparte on route to his expedition of , Doublet formed part of the delegation which negotiated the terms for the surrender of the Order on board Orient, Napoleon’s flagship. He intervened in particular when negotiating the amount of the allowance allocated to the Grand Master. Pointing out that the proposed amount appeared insufficient to him, Napoleon's only retort was to address it directly to the Republic. As with the other Frenchmen in the Order that he thought to be of some use to him, the General proposed, or rather intimated the order, for him to follow him to Egypt, the final destination of his expedition.

Because of his age (he was almost 50 years old) and his family for which he was the only support, Doublet declined the proposal courteously but firmly. His refusal attracted the anger of Napoleon who did not appreciate anyone denying his will. A little later the future emperor will nevertheless confide to , his aide-de-camp, that this man had good qualities because he had substance.

During the occupation of Malta by (June 1798/September 1800), his competencies were again put to use by the French authorities because of his knowledge of the land and because he was French and thus reliable in the eyes of the occupiers. He is named as of June 1798 Secretary General to the Commission of Government installed by Napoleon at the time of his stay. On 10 November, 1799 he will become Commissioner to replace Regnaud de Saint Jean d'Angély who is recalled to France, a position that he will remain in until the surrender of Valletta on 5 September, 1800. The President of this commission was another Frenchman, the "citizen" Bosredon de Ransijat, ex commander of the Order and also it's former treasurer.

The business of the Grand Master

Following the capture of Malta by the troops of Bonaparte and in the débacle of the Order which followed, Doublet was shown to have communicated to the French authorities the secret code that the Grand Masters Hompesch and, before him, Rohan used to safeguard their diplomatic mails. Indeed, as a sovereign order, the Order of Malta then exchanged an abundance of correspondence with the different states around Europe.

His services having intercepted several messages exchanged in particular between the Grand Master and the Tzar of Russia, Bonaparte required that one provide the code to decipher in order to know the contents of these correspondences. Ferdinand von Hompesch yielded to this requirement and Doublet was charged with the handing-over of this secret code. These letters did not bring anything that the General-in-chief did not already know except perhaps, amusing detail, certain appreciations of his own person emanating from French diplomats...! However, being the right-hand man of von Hompesch and, moreover, because of his French origin which automatically made him suspect and due to certain mediums of the Order being very jealous, a rumour charged Doublet very quickly, for the entire responsibility and having delivered the figure to the enemy. Some of his indicters, to the best of their ability, did not hesitate to affirm that Doublet was a traitor, a secret agent on the payroll of Napoleon, introduced within the Order. A similar case is the " [http://www.orderstjohn.org/osj/pauligm.htm Proclamation of St Petersburg] " signed by former members of the Order posting a very servile allegiance to Tzar Paul I and whereby Hompesch is in particular labelled incompetent and defeatist. This is also the case in a published booklet partisan with by an old bodyguard of the (the future Charles X). One can seriously doubt the objectivity of these writings insofar as their authors were obligated to the Tzar, placed under his authority they tried to restart in a ridiculous and pitiful way the previous glories of a broken and deposed order. Indeed, Tzar Paul I had been designated " [http://www.orderstjohn.org/osj/litta.htm Protector] " of the Order and, after its dissolution in Malta, he tried to reconstitute it within the framework of the recently established Priory of Russia. It was thus important to discredit von Hompesch and, if unhappy with the Grand Master but still taking into account his rank, could not openly be shown to be a traitor, at the very least by deferring the crime on his closest collaborators one could make him a traitor by incompetence, weakness and breach. Besides, Tzar Paul I will manage to achieve his goal since after the [http://www.orderstjohn.org/osj/hompesch.htm abdication of von Hompesch] , he is proclaimed Grand Master by some of the members of the Order in exile whom he had hastened to accommodate following their expulsion from Malta (the Grand Master was not recognised by the because Tzar Paul I was married and of Russian Orthodox religion).

Doublet, the ex donat, will share these calumnies with in particular Bosredon de Ransijat, another renegade in the eyes of Order.His honour, Deeply hurt and wounded by all this cabal, but more especially as he always hoped for the re-estlishment of the Order and his return to Malta, Doublet will not cease protesting his innocence in this business until the end of his days, innocence which will be attested to by several direct witnesses, including Matthius Poussielgue, Napoleon's finance adviser at the time of these events.

After the surrender of the French garrison in on 5 September, 1800, the British expelled from the Maltese islands all those who collaborated with the French, expressed any sympathy to them or accommodated them in some way. This included those who had taken an active part in the civil administration and French military, mixed French and Maltese, but also the French who had been long term residents of Malta and whom did not have much to do with the occupation and the events which accompanied it, their only wrong being their origin. Thus was the case for [http://www.searchmalta.com/surnames/manche/ Pierre Manchin] , a native Frenchman of in the department of , living in Malta since 1749, who married there, started a family and had integrated perfectly with the Maltese population.

It is thus, after passing by the Balearic Islands, Pierre Jean Louis Ovide Doublet was disembarked in in December 1800. , private secretary of Napoleon, recalls in his "Mémoires" Doublet presence in in 1802, in spite of a decree from the imposing Directory to the Maltese refugees, if they wanted help they were to remain in the departments of the , the and in (departments of and Golo).

After the "", Doublet once again believed he could be settled in Malta and returns a few times, but was once again exiled when hostilities resumed between France and England.

Subsequently his life became nothing more than a long exile. Due to his participation during the French occupation, as Commissioner between 1798 and 1800, he was suspect in the eyes of the British authorities which now managed the Maltese islands. He spent nine or ten years in Rome, living in a precarious way, intersected despite everything with briefs stays in Malta where he obviously could never remain for a very long time. He finally settled in , (), invited by his son who had settled there. In the last months of his life, he was finally permitted to return permanently to Malta and he died there soon after his return, 4 February, 1824.

Today, many of his descendants have been traced and are living in , , , and . Among these one still bears the name Louis Ovide and towards the end of 19th century one was named Napoleon.

Pierre Jean Louis Ovide Doublet left a book, "Mémoires Historiques sur l'Invasion et l'Occupation de Malte par une Armée Française, en 1798", where he tells of his experiences. The first part is an analysis of the reign of Grand Master Emmanuel de Rohan whereas the second part reports the invasion and the occupation of Malta by the French such as he lived it like a privileged witness. When in 1832, Sir Walter Scott makes his project of work about this period of occupation of Malta by the French, one will present the manuscript left by Doublet to him (it will not be published until 1883, nearly 60 years after his death). The father of and Rob Roy will affirm he acted with good intent and left the most complete report on these events that had been given to him.

This work most probably constitutes a kind of plea pro domo and some will suggest that Doublet could have portrayed himself in a more important role than in fact it actually was.