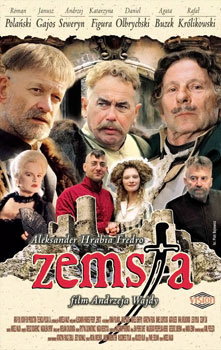 This film is based on a perennially popular stage by the great Polish playwright and poet . Raptusiewicz () resides in one half of a castle with the other half inhabited by his hated rival Milczek (). Raptusiewicz wishes to marry Podstolina (), the widow of the , for her money, while Podstolina herself seeks a wealthy match. Regent Milczek's wish, on the other hand, is to bring about the union of his son Waclaw () with Podstolina. To complicate matters more, Waclaw is in love with Klara () - ward and niece of Raptusiewicz, who took her in following the death of her parents - and the feeling is mutual. The plot thickens when Klara turns into Papkin's () declared object of love.

Written in a sharp, ironic style, "The Revenge" portrays those national characteristics that in time brought on many of Poland's national tragedies. Written for the stage, Wajda has changed very little and transferred practically the entirety of the work to the screen.

Real events inspired Fredro to write the play. In November of , Fredro married , whose included the title to half of a castle located in in the province of Galicia. In , when looking through the archives of the castle, he happened on court records related to a dispute dating from the 17th century between the owners of the castle's two halves - and . The conflict was long and relentless. It ended after more than thirty years with the marriage of Firlej's son to Zofia Skotnicka, an end similar to that adopted by Fredro in his play.

* The original story took place in Kamieniec castle, which is currently located in [http://pl.wikipedia.org/wiki/Odrzyko%C5%84] , while the movie was filmed in castle, located in province, Poland.
* The plot bears an uncanny resemblance to one of the main subplots (two families feuding over a piece of property, which is resolved by the marriage of the two young heirs) of the Polish epic poem , which also débuted in 1834.