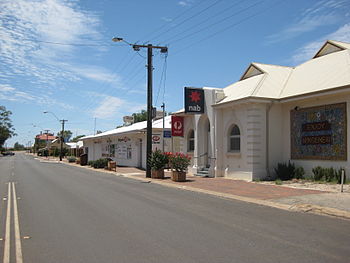 Mingenew is a town in Western Australia, located 383 kilometres (238 mi) north of the state capital, Perth. It is the seat of government for the Shire of Mingenew.

Mingenew was named after Mingenew Spring, an Aboriginal word recorded by European settlers in 1856,[2] possibly deriving from either the words Minganu “the place of many ants” or Mininoo “the place of many waters".[3] Mingenew and the surrounding Irwin District were first explored by the brothers Augustus Charles and Francis Thomas Gregory in August 1847, looking for suitable grazing land. Settlement of the district then occurred in the 1850s because it was ideal country for cattle.[2] The Midland Railway opened in August 1891 and private land was subdivided, followed in 1906 by subdivision of Government land.[2] In 1906, the town of Mingenew was gazetted.[2]

Today, the town's economy is based on the farming of sheep, wheat and lupins.[4]

Mingenew is known as The Grain Centre. The Mingenew grain facility (CBH, Co-operative Bulk Handling) is recognised as the largest inland grower fed receival facility in the Southern Hemisphere, with a holding capacity of 403,000 tons.[5] There is a giant Wheat Stalk Sculpture at Cecil Newton Park in the main street of the town, which is affectionately known as “Big Ears” by the locals, and emphasises the importance of wheat farming in the area.

The Mingenew Lions Midwest Expo is a major annual agricultural field day that has been an important feature of the town since 1983. The Expo is traditionally held on a Thursday and Friday of the third week in September, and showcases aspects of agriculture, health, education, entertainment, lifestyle and general interest products and services. The event is financially beneficial for the region, and injects a flurry of activity, tourism and community spirit into the town. In 2009, over the two day duration of the event, 8,000 people attended and hosted over 380 exhibitors.[6]

Mingenew has many spectacular displays of wildflowers between late July to early October. Varieties include everlastings, hakeas, banksias and grevilleas. Mingenew is in the heart of the Western Australia’s “Wildflower Country”.[7] 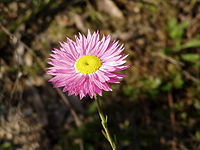 Located 33km north east of Mingenew, the Coalseam Conservation Park is a renowned site for its carpets of native pink and white everlastings (Rhodanthe chlorocephala ss. rosea) and yellow pom pom (Cephalipterum drummondii) wildflowers. The area was named the Coalseam after the Gregory brothers discovered coal exposed within the sedimentary layers of the banks of the Irwin River in 1846. This marked the first discovery of coal in Western Australia, however, after a number of shafts were dug, only narrow seams of poor quality coal were found; thus the site was abandoned. The park is now a popular picnic place, where remnants of its mining history are still present as well as the many marine fossils embedded in the riverbank and the magnificent limestone cliffs from the Permian Ice Age, 250 million years ago – the oldest geological era.[8]

Sport is an integral part of the fabric to the community of Mingenew.