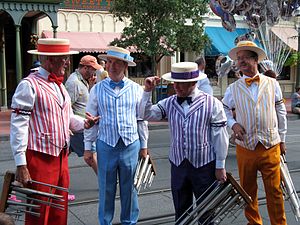 The Dapper Dans at the Magic Kingdom

The Dapper Dans are a barbershop quartet that performs at Disneyland in Anaheim, California (since 1959), at the Magic Kingdom at the Walt Disney World Resort (since 1971), and at Hong Kong Disneyland in Lantau Island, Hong Kong (since 2005). A quartet (from the UK) also performed at Disneyland Paris from the opening in 1992 until 1995 and were known as the Mainstreet Quartet.

While the group usually performs as a quartet, they actually have up to twelve singers at each park, plus occasional substitutes. This allows them to have multiple quartets performing separately or to combine and form a larger ensemble. Membership has changed over the years as various singers have retired or died and new ones have been brought in to succeed them. Several of the Dapper Dans are members of the Barbershop Harmony Society.

You can be serenaded by the Dans at the Magic Kingdom in Florida while having your hair cut in a real, working barbershop on Main Street there. The Dans at Hong Kong Disneyland stroll up and down Main Street from Town Square. The Dans at Disneyland can be seen on their Schwinn custom 4-seater bicycle (commissioned by Walt Disney himself) and in various locations around Main Street.

In the Magic Kingdom, Disney World, the Dapper Dans perform nine sets a day, seven days a week. They can be found on the horse-drawn trolley in the morning, and all over Main Street USA during the afternoon. At 5pm, the Dans join the Main Street Philharmonic and the Magic Kingdom Security Color Guard for the Flag Retreat Ceremony.

Another unique part of Dapper Dans lore is the fact that they use Deagan Organ Chimes as part of the act. Each of the eight chimes has three octaves of a single note, comprising a C scale. The Organ Chimes were made by the J.C. Deagan Company in Chicago, IL around 1901.

As of early 2006 the Dapper Dans at the Disneyland Resort consisted of Shelby Grimm (lead), Bob Hartley (tenor), Jim Campbell (bass), and Bill Lewis (baritone), a group that had been together for over 10 years. In 2006 it was announced that a new group of Dapper Dans would be cast, to make their debut in May 2006 and auditions would be held each season for all four parts. David Marchesano (lead), Robbie Banner (tenor), Frank Romeo (bass), and Steven Arlen (baritone) can now be seen Wednesday through Sunday at Disneyland on Main Street, USA.

The Dapper Dans lineup has changed over the years as various singers have retired or died and new performers have been brought in to succeed them.