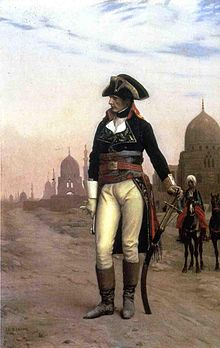 Napoleon in Egypt with a Mameluke sword

A Mameluke sword is a cross-hilted, curved, scimitar-like sword historically derived from sabres used by Mamluk warriors of Mamluk Egypt from whom the sword derives its name. It is related to the shamshir,[1] which had its origins in Persia from where the style migrated to India, Egypt and North Africa[2] and the Turkish kilij. It was adopted in the 19th century by several Western militaries, including the French Army, British Army and the United States Marine Corps. Although some genuine Ottoman sabres were used by Westerners, most "mameluke sabres" were manufactured in Europe or America; their hilts were very similar in form to the Ottoman prototype, but their blades tended to be longer, narrower and less curved than those of the true kilij, while being wider and also less curved than the Persian shamshir. In short, the hilt retained its original shape and the blade tended to resemble the blade-form typical of contemporary Western military sabres. The Mameluke sword remains the ceremonial side arm for some units to this day.

Marine Corps history states that a sword of this type was presented to Marine First Lieutenant Presley O'Bannon by the Ottoman Empire viceroy, Prince Hamet, on December 8, 1805, during the First Barbary War, as a gesture of respect and praise for the Marines' actions at the Battle of Derne.[3] Upon his return to the United States, the state of Virginia presented him with a silver-hilted sword featuring an eaglehead hilt and a curved blade modeled after the original Mameluke sword given him by Hamet. Its blade is inscribed with his name and a commemoration of the Battle of Tripoli Harbor.[4]

Perhaps due to the Marines' distinguished record during this campaign, including the capture of the Tripolitan city of Derna after a long and dangerous desert march, Marine Corps Commandant Archibald Henderson adopted the Mameluke sword in 1825 for wear by Marine officers. After initial distribution in 1826, Mameluke swords have been worn except for the years 1859-75 (when Marine officers were required to wear the U.S. Model 1850 Army foot officers' sword), and a brief period when swords were suspended during World War II. Since that time, Mameluke swords have been worn by Marine officers in a continuing tradition to the present day.[5] 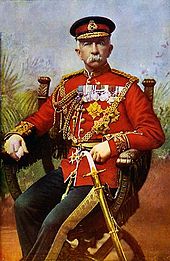 Mameluke swords were carried as dress or levée swords by officers of most light cavalry and hussar, and some heavy cavalry regiments in the British Army at various points during the 19th century, starting in the period after Waterloo. The current regulation sword for generals, the 1831 Pattern, is a Mameluke-style sword, as were various Army Band swords.

There are a number of factors which influenced the fashion for Mameluke swords in the British Army.