The Mark Taper Forum is a 739 seat thrust stage at the Los Angeles Music Center built by Welton Becket and Associates on the Bunker Hill section of downtown Los Angeles. Named for real estate developer Mark Taper, the theatre, the neighboring Ahmanson Theatre and the Kirk Douglas Theatre are all operated by the Center Theatre Group. 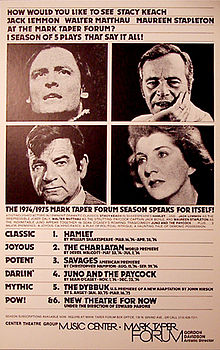 The Mark Taper Forum opened in 1967 as part of the Los Angeles Music Center, the West Coast’s equivalent of Lincoln Center. The smallest of the three, the Taper sits between the Dorothy Chandler Pavilion and the Ahmanson Theater at opposite ends of a plaza.[1] The three buildings of the Music Center were designed by Los Angeles architect Welton Becket.[2]

Mr. Becket designed the center in the style of New Formalism, which emphasized geometric shapes. The perfectly circular Taper is considered one of Mr. Becket’s best works, featuring a distinctive decorated drum of a design, its exterior wrapped in a lacy precast relief by Jacques Overhoff.[1][2] The lobby has a curving, abalone wall by Tony Duquette. Charles Moore described Becket's design for the Music Center as "Late Imperial Depression-Style cake".[2]

Becket designed the building not knowing who would use it. At one point it was considered for chamber music, or even grand jury meetings. Ultimately Dorothy Chandler, the Los Angeles cultural leader, convinced Center Theater Group artistic director Gordon Davidson to use the Taper.[1] For 38 years Mr. Davidson was the artistic director of Center Theater Group, which also ran the Ahmanson and eventually the Kirk Douglas Theater in Culver City. The Taper became known for its thrust stage, jutting into a classical, semicircular amphitheater, which creates an especially intimate relationship between audience and performer.[1]

The building bears an architectural resemblance to Carousel Theatre at Disneyland, also built by Welton Becket and Associates in 1967. It is similar in design concept and size to the Dallas Theatre Center, designed by Frank Lloyd Wright and the original Tyrone Guthrie Theatre, in Minneapolis.

There is also an S. Mark Taper Foundation Auditorium at Benaroya Hall in Seattle.

A $30-million renovation of the Taper led by the Los Angeles firm Rios Clementi Hale Studios began in July 2007 after the 2006/2007 season. The theater reopened on August 30, 2008 for the first preview of John Guare's The House of Blue Leaves.[2]

The Taper, as originally designed, was a case study in what happens when a theater is built without a tenant in mind. Having the auditorium into a circular building left a tiny backstage and only a thin, curved hallway for a lobby.[1]

The renovation updated nearly everything that was not concrete and did not disrupt the building’s circular shape. To create a larger main lobby, the designers shrank the ticket booth and moved the bathrooms below ground, taking out 30 parking spaces and created a stylized lounge with gold, curved couches and mosaics of mirrored tiles that fit the era in which the building was designed.[1] The theater seats are wider and total capacity was reduced from 745 to 739.[2] The entrance was modified to be on grade with the plaza and added an elevator; is one of several changes to increase the accessibility of the theater.[2]

The original theater also had very few women's bathrooms opening with four women's stalls for a 750-seat hall. The renovation increased the number of stalls to 16.[1] Backstage, changes included removing an outdated stage "treadmill", created a modern lighting grid, cleared out old air-conditioning equipment to allow space for a wardrobe room and widened the load-in door to 6 feet by 9 feet.[1]

The auditorium was renamed the Amelia Taper Auditorium after a $2 million gift from the S. Mark Taper Foundation.[3]

Main article: List of Productions at The Mark Taper Forum

The Taper has presented innovative plays since its opening 1967 of The Devils from playwright John Whiting about the sexual fantasies of a 17th century priest and a sexually repressed nun. The play received a great deal of protest from local religious leaders and the Los Angeles County Board of Supervisors, although the production continued.[4]

The production of such plays as Murderous Angels, The Dream on Monkey Mountain, Children of a Lesser God, Savages, The Shadow Box, The Kentucky Cycle and Angels in America has established definition of a "Taper play"; one which is provocative, political and liberal.[4]

In all, the theater has 5 Tony Awards to its credit.